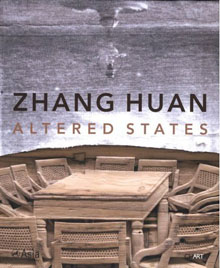 Zhang Huan's performances and sculptures are not easily forgotten. Raw meat, blood, flies, nudity, animal hides, and ashes have made appearances in his brutally confrontational and cathartic presentations. His vengeance is potent, however; never underestimate the power of humiliation.

An example of Zhang’s vengeance is manifest in one of his earliest works. The artist slathered his naked body in a foul-smelling mixture of fish oil and honey and sat motionless for one hour inside a rancid public toilet in Beijing. Holding his face in a resilient, expressionless mask, he silently subjected himself to the sweltering heat and asphyxiating ammonia fumes while flies swarmed and coated him. Finally, he rose, proceeded to a nearby fish pond (a garbage dumping site), and waded in until water covered his head and the few remaining flies straggled drowning at the surface. In this performance, he endured a masochistic amplification of an existing corporeal discomfort to exorcise a shared cultural pain.

Poverty and death surrounded Zhang in his early years. His grandmother and other relatives raised him in Henan Province, China, shortly after the Cultural Revolution. Zhang’s current situation could not be more different. His career has now exploded, and his exhibition history includes numerous shows worldwide. Zhang moved to New York City after his 1998 inclusion in a show at the Asia Society and P.S. 1 Contemporary Art Center. In 2005 he returned to China, where he now employs more than 100 workers at his massive studio in Shanghai. The book Zhang Huan: Altered States honors his 2007 solo exhibition at the Asia Society.

His transition from poverty to art star was not easy. Pilgrimage—Wind and Water in New York (1998) addressed the artist’s difficulty integrating into the United States. For ten minutes, the naked artist lay face down on blocks of ice inset into a traditional Chinese wooden sofa, to which several domestic dogs were ominously leashed. The law of the conservation of energy states that energy is neither created nor destroyed, but can be converted from one form to another. Zhang hoped that his exertion of energy could melt the ice (metaphorically, his pain of separation) and bring him closer to his ideal China, symbolized by the wooden bench. Instead, the ice won, dangerously lowering his body temperature.

In My America (Hard to Acclimatize) (1999) at the Seattle Art Museum, three tiers of naked performers surrounded the artist, imitating the structural format of a 12th-century Jain relief sculpture at the same museum. Zhang instructed the actors to perform twelve ritual and devotional gestures, including practicing tai chi, sitting in a lotus position and praying, imitating animals, and finally, pelting the seated artist with torn loaves of bread. The performers then descended from the structure to mingle and charitably exchange pieces of bread. In Altered States, Zhang described the experience that triggered this artwork: he was hungry in Madison Square Garden, New York City, and looking for food for his pregnant wife when a stranger offered him bread. "My feeling was complex," Zhang explained. "I could not speak. I felt emotional and wanted to cry. I accepted the bread and walked away. It made me think of my life in China. In China no matter how hungry I was, I was an artist. Nobody would think of me as a beggar. . . because of difficulties in culture and language, I could not adapt to life in America. I was like an idiot. This is my America."

Unlike the philanthropy Zhang received from an American stranger, in China, personal needs and favors are commonly solved through “guanxi,” the loyalty of support in business and social relations. In My America, Zhang pairs the humiliation and insult of his experience of American generosity with a hodgepodge of spiritual gestures that seem primitive and ridiculous in their random combination. Zhang exposes the frailties of ideologies, cultures, worldviews, and religions, but at the same time he accepts their “bread”; he calls for a revitalization of hope and allegiance, asking witnesses to connect again to the heroic and spiritual in art and life no matter how fragile the shards that remain.

Zhang recently began sculpting enormous reliquaries that oscillate between hope and despair, battling the spiritual betrayal and emotional scar tissue inflicted by the Cultural Revolution. Zhang visited Tibet in 2005 and collected fragments of Buddha sculptures that were smashed apart during the Cultural Revolution, then fabricated the dismembered fingers and legs on a monolithic scale and used the resulting hollow forms as receptacles for animal cages and scrolls. "By making them larger,” Zhang says in this catalog, “it somehow takes away the pain."

A thread of spiritual transcendence and an essential fiber of shared cultural relevance redeem Zhang’s masochism, but his obsessions with pain can be disturbing, and his conceptual aims may not be apparent at first encounter. The format of a book palliates the intense physicality of his provocative spectacles by enabling viewers to slow down and comprehend his rancor and vehemence more gently, mediated by the intimacy of print and writing. To that end, the book is effective, but Zhang’s urgency and potency fade in descriptions of some later works, which are less cathartic and more allegorical and cross-cultural, though still harrowing in their cruel theatricality. The written content of the catalog crescendos in the last and longest essay: Zhang Huan’s own plainspoken, straightforward, and honest explanations that link his works to his plaintive needs for creating them.

Some troubling works are not included. For example, his Giant 1 and Giant 2, intended for the Shanghai Art Museum, were censored by the Shanghai Cultural Bureau and ended up in the collection of French businessman François Pinault, while Giant 3 was recently shown at Pace Wildenstein, a very prominent and influential New York gallery that invited Zhang to its lineup in 2007. These artworks are imposing figurative sculptures constructed of hundreds of animal hides stapled together, hooves and hair included. One giant is pregnant, and a smaller figure (perhaps representing the artist) climbs another giant, desperately seeking love and asylum from a rotting and horrendous environment. Zhang is no stranger to censorship: in 1993, the Beijing-based Central Academy of Fine Arts in China did not appreciate Angel, his performance about abortion and China’s one-child policy, which involved fake blood and dismembered dolls. The celebratory disposition of a coffee table book fails to engage the non-celebratory ramifications of his work in China and the effects it may have outside the circle of his supporters.

Sometimes shock is needed to break society’s complacency. Zhang’s extreme physical risks reward the challenge of unraveling their contextual importance, and this book adds pathos and human interest to that shock while conceptually substantiating Zhang’s displays. By persuading viewers to slow down and muster the courage required to understand his motivations, the book has the potential to expand that circle of supporters by revealing the poetry, conceptual depth, and moral and ethical challenges that mobilize his intrepid cultural aims.