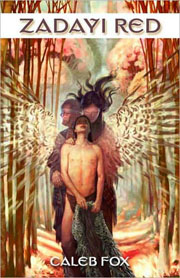 It all starts with a dream. Sunoya, a prophesied shaman of the Galayi people, has a vision of the sacred Cape of Eagle Feathers desecrated by dirt and blood. She is supposed to take on the duties of her tribe’s Medicine Chief, but delays this to get advice from Tsola, the “Seer and Wounded Healer” who lives in the Emerald Cavern. Now she must travel to the Land Beyond the Sky Arch to meet with the Immortals and find a way to save her people.

So begins Zadayi Red, Caleb Fox’s gripping story of the ancestors of the Cherokee, set long before Europeans invaded the land and nearly destroyed this rich culture. Fox deftly recaptures the intense spiritual relationship these ancient people had with the land and their fellow animals, when shamans practiced profound rituals that allowed them to communicate with the gods and even shape-shift, see the future, and read minds. But of course, being human, these ancestors had their faults and warred with each other, harboring ill will and aspirations to rule over all, some becoming quite psychotic in their bloodthirstiness. This is what threatens the Galayi tribe, for one of the sacred rules they live by is that Galayi must not kill another one.

During Sunoya’s visit to the Land Beyond the Sky Arch, the immortal Thunderbird has Sunoya retell the story of how humans brought death into the world through their selfish actions, disrespecting the animals and the earth. “And since it was there, nothing to be done about that, we Immortals gave the Galayi people the Cape of Eagle Feathers. In such a world you needed more wisdom. Now Granddaughter, you remember that with the Cape we gave you one central command about how to live, a number one thou-shalt-not?” Thunderbird bestows upon Sunoya the gift of a spirit guide to help her and the Galayi stop the desecration of the sacred robe. Buzzard, soon named Su-Li, follows Sunoya back to the world, called Turtle Island. This is just the beginning of a long saga, rich with creation stories and riddled with bloody warfare, as Sunoya returns and raises a child as her son, Dahzi, who carries the hopes of the Galayi to redeem themselves and reassemble the sacred Cape of Eagle Feathers.

Of course, the dualistic nature of Turtle Island becomes illustrated in the fact that while the Galayi value peace and prosperity, they also value heroic warring, so there is a constant push and pull between the White Chiefs and Red Chiefs, one always in the ascendant depending on the stability of the tribes. There are always other peoples to war against, enemies to kill, women and children to steal and hunting grounds to reestablish. This is where the title comes from: a zadayi is a small round bit of leather painted red on one side and blue on the other; a warrior faces the red out if he is victorious in battle, and blue if not.

Fox, who is part Cherokee, researched the stories and ceremonies of the Cherokee and Lakota peoples, and this book is the fabulous result. He integrates these myths with a very human story of people trying to do the right thing, following the guidance of morals handed down to them by gods who—though they act somewhat detached and alien—have a deep investment in those humans who are sincere and pure followers of their faith. The depth of its themes and the imaginative play of the story makes Zadayi Red a fantastic tale to read. 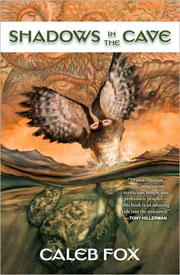 Luckily, Caleb Fox has produced a sort of sequel to his first volume with Shadows in the Cave, whose story takes place a few generations after the previous novel and follows the lives of Dahzi’s grandson Shonan, the Red Chief of Tusca village of the Galayi tribe, and his twin children, Aku and Salya. Their mother and Shonan's wife, Meli, is the shapeshifter of the family, much to Shonan's distaste, and he discourages her from using her talents. However, her strength as a shaman carries through and she saves her family's lives through the sacrifice of her own while changed into an owl. From then on, Shonan forbids his children to practice this talent, and his bitterness carries forward into the rest of his life, stunting the way his children interact with magic and the spirits of their people. But there is no way to avoid the inevitable.

Shonan's plan to blend some of his tribe with the Amaso people who live on the ocean shore, in order to strengthen their numbers, brings him and his children straight into a devastating realization. The Amaso's declining numbers is primarily due to a nearby warring tribe who steal their women away, and Shonan's own daughter falls victim to this outrage. As they strive to retrieve her at all costs, it is clear that Aku's shapeshifting talents must be used, and he needs a crash course in learning the ways of the spirits. Aku visits with Tsola, the Wounded Healer, who still lives in the Emerald Cavern.

Fox not only weaves an engaging, page-turning story, but also confronts the idea of story itself. He shows in these two books the power of story, especially the story of origins and creation, that helps a people hold together through dire circumstances. But story can have a negative side as well, as Shonan and Aku witness when they are forced to venture into the Underworld to retrieve Salya. There, many of the dead painfully relive stories that reflect their own fear and pain. They obsessively repeat arguments and torments, preferring the familiar pain of this connection to what they perceive as life than to moving on into spirit. "They are all consumed with fear, said Oghi. Fear is the flame that inflicts all their suffering. Tsola said, Everything we're seeing down here is what they're afraid of. None of this happened in real life. None."

Fox has created a complex and entertaining world that combines the fantastic and the real in ways that enrich each other. He takes on weighty themes of love, war, integrity, and treachery—all the issues that are relevant today—and tells them with riveting flair and fun. Especially the strength of family in the face of tragedy, the fruitful and loving inter-generational relationships that prove necessary to achieve any kind of victory, the coming together of people in peace as opposed to the tearing apart due to greed and lust—these values are at the core of these imaginative tales.