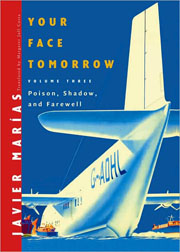 In the last twenty years the Spanish novelist Javier Marías has produced a string of novels bearing a remarkable consistency in tone, all narrated by a solitary, ruminative observer who is obsessed by the untold histories of the people he encounters. This narrator works as a translator, has a wife named Luisa, from whom he is often estranged; he quotes Shakespeare and other writers more than occasionally—not to others, but to himself; he has a solid grasp of European history and a voyeuristic interest in what’s happening outside the windows of his apartment. The similarities among the novels, and between the novels and the personal history of the novelist himself, doesn’t trouble Marías in the slightest. As he writes at the start of Dark Back of Time (1998):

I believe I’ve still never mistaken fiction for reality, though I have mixed them together more than once, as everyone does, not only novelists or writers but everyone who has recounted anything since the time we know began, and no one in that time has done anything but tell and tell, or prepare and ponder a tale, or plot one.

The three-part novel Your Face Tomorrow continues along the same path, echoing earlier works while offering new episodes in our narrator’s story. It’s longer than anything Marías has done before (roughly 1270 pages) and the fact that he succeeds in holding our attention throughout its course makes it arguably his most impressive achievement to date. The layers of intrigue it contains may be suggested by the fact that the narrator, one Jacques (or Jaime, or Jack) Deza, discovers a spot of blood in the home of a former Oxford don he’s visiting on page 131 of the first volume, and we don’t learn where that blood came from until a thousand pages later, as we near the end of volume three. But we’re never allowed to forget that it exists, because Deza, who had tried to clean it up and found the rim impossible to remove, takes that persistent stain as a symbol of the dark deeds that are continually (though seldom completely) being washed away by time.

There are several dark deeds within the story itself, which involves the narrator’s experiences working for MI5 or MI6 (he isn’t quite sure which) as an interpreter, not of speech, but of character. He’s been recruited by a man named Tupra on the recommendation of some Oxford friends who had once been involved in the same business and are impressed by his almost novelistic insights into character. He spends his days sitting behind a one-way mirror, listening in on interviews and then discussing with Tupra whether the man or woman in question is lying or trustworthy, would have courage in a dangerous situation, is “to what extent resentful or patient or dangerous or resolute.” Although it’s all rather nefarious, he acts as if it’s really none of his business. Yet near the end of the second volume he witnesses a scene of shocking violence initiated by his boss in a nightclub restroom (though he does almost nothing to stop it, to his later chagrin), and in volume three, he finds himself faced with the challenge of committing a similar act himself to protect his estranged wife Luisa.

Though the story is intriguing from beginning to end, the events themselves are few and far between; much of the richness of Your Face Tomorrow is to be found in the narrator’s private ruminations on those events and on the lives of his colleagues, several of whom did intelligence work during the Second World War. Their cryptic references to the past repeatedly bring to mind his father’s experiences during and after the Spanish Civil War (which, not surprisingly, mirror those of Marías’s own father Julien, a philosopher and protégé of Ortega y Gasset). During such moments of introspection, the narrator piles thought upon counter-thought, clause after clause, with mesmerizing beauty and clarity, into delicious sentences that can run to a page or more. To take a relatively brief example:

Everything that exists also doesn’t exist or carries within itself its own past and future nonexistence, it doesn’t last or endure, and even the gravest of events run that same risk and will end up visiting and traveling through one-eyed oblivion, which is no steadier or more stable or more capable of giving shelter. That's why all things seem to say 'I'm still here, therefore I must have been here before' while they are still alive and well and growing and have not yet ceased. Perhaps that's their way of clinging grimly to the present . . . and to stop other people saying 'No, this was never here, no one saw it or remembers it or ever touched it, it simply never was, it neither strode the world nor trod the earth, it didn't exist and never happened.’

Alongside this theme, which we might call historiographic, runs an ethical one initiated by Deza’s boss. At one point, after Tupra has nearly murdered an associate and Deza objects, Turpa relies blandly, “Why can’t one, according to you, go around beating people up and killing them?”

Such weighty issues provide a steady, gentle passacaglia beneath the narrator’s acute yet unhurried observations of the life going on all around him in London (and later Madrid), his problems with his wife, and his asides on Spanish and English culture, medieval history and literature, warfare, James Bond, and other subjects too numerous to mention. As he puts it, “books speak in the middle of the night just as the river speaks, quietly and reluctantly, and their murmur, too, is tranquil or patient or languid—” A reader new to Marías might profitably begin with one of the earlier novels, but if Your Face Tomorrow lies close at hand—even the third volume—by all means take the plunge.