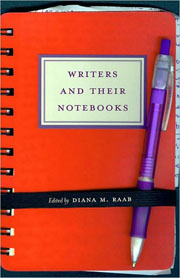 First, a curmudgeonly observation to get out of the way: I do not “journal,” nor am I ever to be found “journaling.” Diana Raab and the essayists she has assembled in Writers and Their Notebooks are fond of these ungainly words. I recognize that language is an art, not a science, and new terms arise to fill a need, but behind the new jargon I smell the commerce of the creative writing industry, which now offers classes in journal-writing—an absurd appropriation of the most free-form, experimental genre there is.

I keep a journal and have for most of my life. I began, as a number of the female contributors to this book have, by filling a little lockable volume with ruled pages, one per day. At first I found it silly to be talking to myself, so I addressed my entries as letters to “Dear Anne”—invoking the presence of the tragic and iconic journal-keeper, Anne Frank, who herself confided in “Dear Kitty.” Eventually, I graduated from that wholly self-involved diary to what I considered the mature medium of the journal. Since then, I have amassed a shelf full of spiral-bound notebooks in which I could record a paragraph or five pages at a time, skip entire weeks or write at a furious daily pace (with fountain pen only.)

The capacious, all-welcoming journal invites metaphor. Phillip Lopate, in his foreword here, gathers up a rag-tag assortment. The journal is “a laboratory, . . . a wailing wall, a junk drawer, a confessional, . . . singing in the shower, . . . a jump-start cable, . . . a warehouse, a tourist’s camera, a snooping device, . . . a meditation practice, masturbation, a witness stand, . . . a housekeeper, a spiritual advisor, a compost bin” and much more. Within its unruly pages, its wild or soberly quiet words, it contains the seeds of every literary form, hence its attraction for writers. The diary is a navel-gazer; the journal looks outward as well as severely within. It passes from memory to observation to free association to analysis. What matters is not what it looks at but what it sees, as Thoreau opined. Maureen Stanton disagrees with these definitions. She thinks of diaries as mere records of the day while “journals lend themselves to brooding, to complaining, to confessions of fear and desire.” I’m willing to grant her that distinction, but not the conclusion she draws: “Diaries are a feminine form, journals seem masculine.” Isn’t it the other way around?

Many of the writers in this collection keep two or three journals: one for jotting down and playing with story or poem ideas, another for recording life, sometimes a third for recording dreams. The latter is an attempt for a writer to get behind the screen or official narrative of the self to see what demons and dragons lie in the dark inner ocean. I myself keep a life journal, a commonplace book, and a succinct reading journal (name, author, date finished, one or two word commentary: “very good,” “utter trash,” etc.)

Only one of the contributors, Kim Stafford, transfers and expands on his walking-around notebook on a computer. Writing on a computer suggests, to me anyway, that you are potentially addressing an audience of more than one. Tony Trigilio elaborates my suspicion with the observation that “blogs were public versions of private journals. . . . Blogs seemed to combine the potential for both private, undomesticated journaling and public performance.” Whatever nonsense or profundity a writer scribbles into a journal performs for everyone an essential function: it keeps writers lubricated, exercised, warding off the dreaded “writer’s block.” It becomes harder to fear the blank page when you’ve gotten so used to noodling around on one. It is also the best way I know of developing a rhythm and attitude, what we call a writer’s distinctive, unique “voice.”

Journal-keeping, benign as it mostly is, has a detractor in Peter Selgin, who describes his habit as an addiction, a case of hypergraphia. He had no memories independent of what he had written down. “My diary became not the place where I kept track of my existence, but where I lost it in a flurry of words, my spiritual garden choked with verbal weeds.” He also points out that, according to a recent study in Great Britain, “people who keep diaries are more likely to suffer from headaches, sleeplessness, digestive disorders, and ‘social awkwardness.’” Let’s hope the British are just whinier than we are, though I can certainly believe that working over life traumas on the page can keep one from getting over them.

The one theme that pops up in almost every essay here is the question of honesty. Wendy Call maintains that “the sentences in my journal are those laid down fresh, unencumbered, and undamaged by the internal and external censors that buzz around our words as we polish them for public display.” Diana Raab is sure that, “in time, your natural, authentic voice will emerge on the pages of your journal—a voice free from societal restrictions and inhibitions.” But as anyone who has read the diaries of Anais Nin can see, self-making and revelation can be highly narcissistic and manipulative.

Writing is hardly a natural act. We’ve been doing it for only five thousand years, give or take. And when you keep a journal, you are dividing yourself into two people: the writer and her reader, who may be more critical than neutrally receptive. A double consciousness is a refined state of mind. It is certainly good training for creating fictional and poetic personas and characters who don’t come trailing the swampy dregs of sentimentality. Still, though less inhibited, I don’t think a journal writer can ever be wholly “free.” As for honesty, we do the best we can, but can we ever be sure of the reasons why some thoughts and experiences don’t make it into our journals? I’ll give the last word to Reginald Gibbons. “The keeping of a journal is a peculiar form of writing practice; whether deliberate or hasty, formal or casual, whether more or less honest (depending on one’s mood and motives), it seems not quite fully meant to be private, even at its most private.”