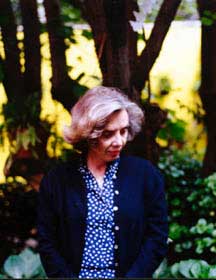 Elena Poniatowska is one of Mexico's most widely translated and celebrated living writers; her books such as Hasta no verte Jesús mio and Tinísima (Penguin), a biography of the Italian photographer Tina Modotti, have bridged the gap between fiction and essay, while texts like Nothing, Nobody (Temple University), which describes the aftermath of a devastating earthquake, and Massacre in Mexico (University of Missouri), have given voice to the humblest elements of Mexican society. In 1998, she published five books, including the novel Paseo de la Reforma (Bantam) and Cartas de Alvaro Mutis, a book based on the relationship she developed with the Colombian writer during his imprisonment in Mexico during the 1950s.

Recipient of a Guggenheim Fellowship, an Emeritus Fellowship from Mexico's National Council of Culture and Arts, and honorary doctorates from the University of Sinaloa and the New School for Social Research, Poniatowska was born in Paris in 1932 of a Polish/ French father and a Mexican mother. Ten years later the family moved to Mexico, where Poniatowska has since resided, becoming a citizen in 1969.

The following interview took place December 23, 1998, at Poniatowska's home in the colonial neighborhood of Chimalistac, Mexico City. We spoke about her country's current political climate, as well as some of her recent publications.

Jay Miskowiec: How do you differentiate between your fiction and your journalistic writing?

Elena Poniatowska: I think their processes are totally different. For me journalism is a very anguishing process. When you write for a newspaper you enter into a rhythm, a rhythm that justifies everything. First of all you talk a lot—you talk while you're writing the article, you talk about it after it's done, there are lots of phone calls, no? And moreover it has an instant gratification, because what you write today you see published in the paper tomorrow, for the good or the bad, on the first page or the fifth, well displayed or hidden. Then when you reread the article you say to yourself, Ay! How barbarous, it's no good, I didn't write that, I forgot something else, here I was incorrect, there I wrote down the wrong number, all those errors one makes and always justifies with being in a hurry. You say to yourself, well if I'd had three or four more hours it would've turned out better, but I had to turn it in. It's quite a distinct rhythm, one you put yourself into like a motor going a thousand revolutions per minute.

In literature, however, you don't have to render accounts to anyone but yourself. When one is accustomed to journalism it's very difficult to change rhythms; changing channels is very painful. Why do I use the word painful? Because one loses all the support journalism gives you. First of all you're before the blank page—it's a great adventure to face the writing desk with whatever you say depending on you yourself, no? And it can be good or it can be really bad but it's all on you. So for me going from one rhythm to another is what takes the most work. Moreover I'm an insecure woman. I think if I had been someone sure of herself I never would have done so many interviews.

JM: Insecure? How so?

EP: I feel insecure because I've always been the friend of important people but only while I'm also their journalist, while I follow after them, while I'm their reporter who gathers their words. Though I can be quite impertinent during interviews, in the end I imagine that people consider me more a journalist than a colleague. Now I would prefer to dedicate myself to writing novels. After all, I've been in journalism since 1953. Forty-six years; that's a lot of time. I think I've given everything I could to journalism.

JM: You write in the epilogue to Letters from Alvaro Mutis that after he got out of jail you never saw each other again, except on a few social occasions. Why not?

EP: For a very concrete reason. I think he didn't want to see people that would remind him of jail. Not that I was ever going to talk to him about jail, I never would have touched the subject—I'm not so foolish. I just don't think he wanted to talk about it.

JM: When you finally went to his house for the first time last year, you wrote, "He probably thought I was going to put him into check." What then was the risk for him? Bad memories?

EP: Well, the risk would have been that I insisted on talking about the crime that sent him to prison, and that I would have judged him. But I would never be the judge of anything. But putting him "in check" meant to ask questions he didn't like, to ask him questions he would have had to answer. Mutis guards his privacy closely. He told me, "These letters will only be published because they concern you; if not, they would never be published."

JM: In Paseo de la Reforma, one of the characters comes to understand that "it was possible to have a life created by words." Do you agree?

EP: That's an illusion on my part, I think, because I've always felt I lead a life created by my obligations or that I create for myself a series of obligations, but that's not to say then I'm a victim of them. I don't know how to achieve liberty through words, so I attribute to my characters what I haven't been able to do myself.

EP: Well, as we've seen so far there has been no reaction by the government. But you have to consider that if the government could never find the killer of Cardinal Posadas in Guadalajara, nor the killer of José Francisco Ruiz Massieu, nor the killer of Luis Donaldo Colosio, much less are they going to solve or do justice to what happened in the countryside of Acteal, in one of the poorest places in Chiapas that had already been quite a headache. Nobody is going to be satisfied with the Attorney General's White Paper [the official government report on the killings in Acteal], nobody's going to believe it. On the contrary, everyone knows that there are paramilitary groups in Chiapas acting with the aid of the government, and that the counselors who wrote the report put the PRI officials in the best light.

JM: But beyond what the government says, what has Mexican society come to understand from Acteal? That is, what does it do with its knowledge of those events?

EP: I think that Mexican society has indeed learned something, because you see now a lot of young people, by their own means and their own financial resources, going to Chiapas. This seems notable to me: they go to Chiapas in a very disciplined way and work in a very disciplined way. They make peace proposals, and they're ready to take initiatives. They're ready to give their help, completely motivated by the enormous sympathy they feel for the EZLN guerrillas. It's not just something on the Internet. I believe the most important thing that came out of that was all these kids, all these university students and people from the provinces who are very organized and disciplined. That's an honorable attitude.

JM: In a recent article in Proceso [a Mexican news magazine], Carlos Monsiváis writes that Mexico has a vigorous tradition of the success of impunity. How can that tradition be ended?

EP: Carlos is referring there to the absolute corruption that never punishes the corrupt. The higher the government post, the more difficult it is to punish the person. It's harder to punish a cabinet member than a kid who steals a bun on the street corner. So we have a long tradition of corruption and impunity that exists in every social strata. It exists in the president of the republic and in all his cabinet members, and of course it exists in lesser functionaries where corruption is so obvious. Customs, for example, on the border towns is a hold-up, a frightening robbery. And here we are in Mexico City, in the biggest city in the world, and probably one of the most violent cities in the world, a place where they warn you not to go out at night. We practically live in a state of siege.

JM: Is it then an inevitable situation? What kind of politics can impact it?

EP: I would cite NGOs [Non-Governmental Organizations], which have really delivered a lot. In 1985, when the earthquake happened, they often accomplished what the government could not. During that period civil society emerged—from the Boy Scouts to the Salvation Army. The Salvation Army won the respect of everyone because they were very efficient and always did the most possible; they had good coffee, good tacos, good milk, good sandwiches. So people trusted the NGOs, as well as the religious organizations. They made their donations—whether clothes or money—in churches, because they thought they wouldn't get stolen there.

JM: Five years after the uprising of the EZLN, do you believe the "political space" which Marcos has spoken of has been created?

EP: I think they have won a political space, although the accords of San Andres have yet to be fulfilled. Moreover they have honored their word to be soldiers who use rifles so as not to use rifles again. They arose in arms in January 1994 but it was very clear that Marcos didn't want to use them again. On the other hand the zone has been completely militarized and none of the problems of the poorest people of Chiapas have been resolved, and they go on living exactly as they did during the Conquest.

JM: What is the significance of Cuauhtémoc Cárdenas's election as mayor of Mexico City?

JM: In your opinion, what has been his greatest accomplishment?

EP: Look, in Mexico not to steal is already a great success. It's horrible to say but it's the truth. To have a leader people know isn't stealing is already a triumph—it's to win the first battle against corruption.