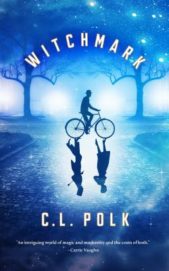 In her debut novel, C. L. Polk sets out to show “good people striving to do good things for good reasons” (as she puts it in her Twitter feed). She’s also written one of the most enjoyable romance-plots I’ve read in years, set in a fully realized secondary world involving lots of bicycles, a supernatural, mass-murder mystery, and (wait for it) magical cotillions. This suspenseful, immersive book successfully defends the proposition that a ridiculously high entertainment-quotient need not be at odds with serious moral purposes—and more so, that the two complement each other.

Witchmark wears its romance and fantasy allegiances lovingly and openly, but from the beginning Polk stakes an unapologetic claim on subject–matter associated with serious fiction. Her protagonist, Miles Singer, is a doctor whose hidden magical powers allow him to perform unusual cures, while also placing him at risk of being publicly exposed as a witch. He works in an under-funded veteran’s hospital and is, himself, a veteran of the long, devastating war between his country, Aeland, and distant Laneer. Miles’s experience of armed conflict, and his role as a caregiver for traumatized military personnel within a resource-depleted hospital system, gives the book broad access to topical echoes from both the World War I era it specifically references and the present day. Witchmark’s action begins where the book’s politics live—with an assertion that modernity’s institutions are often run by the powerful to the detriment of the vulnerable, and a simultaneous, hopeful claim that the best of us will give everything they have to correct that imbalance.

Here, for instance, is the second sentence of the book, as spoken by Miles: “[The hospital memo] began with the usual hurrahs, our boys victorious and finally coming home, but it ordered me to banish sixteen patients from my care by week’s end.” Miles will contest this order, but his superiors are implacable — and, it turns out, implicated. To be a healer under such circumstances is to be stressed to the very core. Miles’s readers quickly learn that he has been asked to bear far more than his share of the conflict between individual need and poorly–structured (or actively malign) organizational directives. His punishing role as an intermediary between established powers and marginalized communities comes into harrowing focus as Witchmark draws to its conclusion. All the way through the book, however, Miles is buoyed and chivvied along by a gorgeous stranger known first as “Mr. Hunter” and later as “Tristan.” Here’s Tristan, again narrated by Miles:

He removed his gloves and hat, and in other circumstances I would count the sight of him as a moment of joy. . . . his face belonged on the cinema screen—golden-skinned symmetry, with graceful bones and keen blue eyes. Lines around his mouth indicated a mirthful nature, and the light in his eyes suggested that he found something amusing without seeming cruel. It added up to the handsomest man I’d seen in years.

Believe me, you want to be there for the course of their courtship. Polk knows every romance-novel hook, complication, vexation, and productive delay, and can execute them with the best in the field. The attraction between the two men grows along with the dangers they face, as they try to solve a string of murders committed by Aelander veterans infected with a strange disease that only Miles has been able to diagnose as a widespread, latent threat to the nation at large. At the same time, Miles and Tristan must contend with the punitive interference of Miles’s wealthy, influential relatives who want him—and his magic—back, for their own uses. And then there’s the small matter of Tristan’s rather dramatic secret identity to deal with. How will it all work out? I’m not going to tell you. But C. L. Polk will, in splendid style.