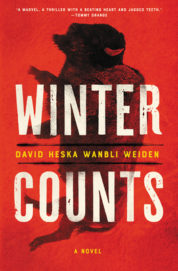 A stunning crime novel, Winter Counts offers a fascinating snapshot of life and Lakota culture on the Rosebud Indian Reservation in South Dakota. It’s a place where only the federal government has jurisdiction over felony crimes, but they ignore most crimes besides murder. The book’s hero, Virgil Wounded Horse, thus has a compelling purpose: he is an enforcer who punishes other criminals, as we learn on the opening page when he beats up a rapist.

Virgil has been divorced from traditional Lakota values since his father got cancer and traditional prayers failed to save him, but he does remember his childhood, when he and his sister made “winter counts”—a traditional Lakota calendar with a picture of the most significant event that year. After his sister dies, Virgil raises his 14-year-old nephew Nathan, who also eschews traditional Lakota beliefs. Nathan begins using heroin and is eventually charged with felony possession when oxycodone pills are found in his locker, pills he claims have been planted. This sets into motion the events that propel the narrative.

Author David Heska Wanbli Weiden gives a brilliant portrait of the Rosebud reservation; he’s especially skillful at depicting settings like the shack that Virgil and Nathan live in, the community center that looks like a squat gray bunker, and the town’s three restaurants—all of which serve bad food. A deep contrast is drawn when Virgil reconnects with his ex-girlfriend Marie and goes to dinner at her parents’ big, modern house (once owned by a white ranching family, who, like many whites, had gotten reservation land in the 1890s); it’s heavily emphasized that their family is one of the few that live like this.

Virgil struggles with how to get justice for Nathan and how to honor his community. Despite his disavowal of tradition he visits medicine man Jerome, who tells Virgil that Lakota justice means “healing the community” and that he should tell his nephew not to be like the magpie that “fouls its own nest.” Virgil and Marie also begin to connect with Lakota traditions together, since Marie is learning how to cook traditional Native American foods.

Winter Counts offers readers not only a fast-paced thriller, but also teaches them about Lakota culture and even a bit of the language, such as the word toksa which means farewell (but not goodbye: Virgil notes that the Lakota believe “we are forever connected”). As the book careens toward a riveting ending that includes heroin dealers, a yuwipi ceremony, and a daring rescue, Virgil learns “that there was mercy for me and for all the wounded and the lost.” Ultimately, Weiden's work is a cross between a novel and a winter count: the tale of a period of time that, like the traditional Lakota calendar, gives a picture of the most significant event of the year.