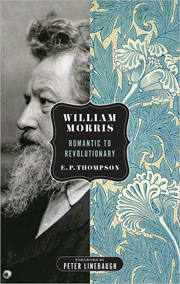 A massively popular figure in his British homeland, with his 1963 tome The Making of the English Working Class still widely considered a foundation stone of modern learning, E. P. Thompson was known across the world from the 1950s until his 1993 death also as a global peacenik, anti-nuclear activist, and magnificent orator. William Morris: Romantic to Revolutionary, his first major work (published in 1955), offers a guide to his favorite Romantic, the eco-visionary and Pre-Raphaelite ally who also transformed interior decoration. It is also part of “Spectre,” an auspicious series of classic reprints and new books edited by radical radio host Sasha Lilley.

Thompson’s Morris is the son of a shrewd investor, a product of the bourgeoisie who rejects almost every consequence of its emergence. Despising “shoddy,” Morris sets about creating a studio that turns out extraordinary furniture (including the famous Morris Chair), curtains, upholstery, rugs and assorted materials that in effect repudiate the overstuffed royalism of the age. For inspiration, Morris looked at nature, and more specifically, to the artistic remnants of the otherwise vanished Celts—their love of trees, flowers, birds, and natural designs. He hung out with the circle of artists who sought to recuperate the romance of earlier times and themes of Biblical lore, with human figures too ethereal to be quite human.

Morris, following the logic of his own aesthetics, became a crucial defender not only of old buildings, but also of ancient hedgerows, the rural remnants of a thousand years or more in community life. From there, he went on to found, with a handful of others, the British Socialist movement, funding a weekly newspaper that he edited, and many public events, out of his own pockets. As Thompson unravels the tale, the great designer was ever the romantic but steadily more the revolutionary.

Anarchist no less than Marxist, Morris made the likes of Friedrich Engels uneasy, since “utopianism” smelled of backward-looking dreamers, and Morris was definitely a backward-looking dreamer himself. Besides, Morris seemed to stiff-necked socialists too popular for his own (or their) good, his News from Nowhere offering up a novelistic picture of a future society more dependent on free time than on mechanical marvels.

The massive text of this volume, which revolutionized Morris studies and outraged conservative (and purely literary) specialists, compels the reader to take on these complicated matters bit by bit, almost day to day, sinking into Morris’ life, letters, and milieu. Reading the book can be overwhelming but will be rewarding, not only for the subject but also for the author himself, as we read him through the study of his favorite romantic. A new foreword, by Thompson scholar Peter Linebaugh, offers a lyrical view of the Great Peacenik as well as a close reading of scholarship about Morris before and after Thompson’s text. Morris, we learn, was with Thompson his whole life. Through this book, he is bound to be with us as well.