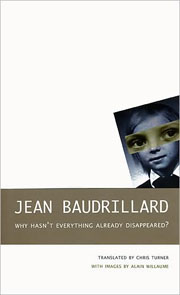 In this brief book, completed just two months before his death in March 2007, noted theorist Jean Baudrillard takes yet another look at a long-time theme: the disappearance of the real. “Let us speak, then, of the world from which human beings have disappeared” opens the book. For Baudrillard, human beings began to disappear when they began to analyze the world scientifically. He brings in Hannah Arendt’s idea that such analysis seeks to come from an “Archimedian point,” a point “outside the world . . . by which the natural world is definitively alienated.”

Baudrillard’s observation is that to analyze or categorize anything is to push away the very thing one intends to capture by bringing such precision to bear. “By their exceptional faculty for knowledge, human beings, while giving meaning, value and reality to the world, at the same time begin a process of dissolution (‘to analyse’ means literally ‘to dissolve’).” This dissolution, he claims, is of the bond between things and their “brute reality.”

Embroidering this basic theme, the most interesting tangent Baudrillard develops is that with the unlimited pervasiveness of technology, “both mental and material,” we are now capable of fulfilling all our potentialities. But once we achieve this fulfillment we begin to disappear, because as human beings have become “purely operational,” or one with our technical means. Thus the world “no longer has need of our representation,” and the bond between people and the world dissolves. This is, for Baudrillard, an unusually explicit statement of the idea that we and the world are both active participants in our long-time bonding. This idea is reinforced by his equation of disappearance-by-fulfillment with disappearance-by-death, “as though that destiny were programmed somewhere and we were merely the long-term executants of the programme.” That is, Baudrillard suggests there exists a teleology that treats us as a disposable catalyst: once we have achieved oneness with the analytical, we are no longer needed. And he sees the good in this, noting that “the dissolution of values, of the real, of ideologies, of ultimate ends” reveals the world as it is.

Another subject Baudrillard concerns himself with at length here is the disappearance of traditional (light to negative to print) photography, which he finds a perfect snapshot of what is happening to “the world of the mind and the whole range of thought.” Digital photography, because of its binary construct of 0 and 1, eliminates the “entire symbolic articulation of language and thought”; it thus allows the world to bypass human intervention, to produce itself as “pure trace.” This, for Baudrillard, is of crucial interest—“for, if there is one supreme product of the human mind, that product is truth and objective reality.” The book includes a number of “images” by Alain Willaume, many of which appear to be digitally manipulated photographs, so we can read Baudrillard’s evaluation of such technology and experience it at the same time.

While one may have lingering doubts as to whether this text was truly finished before Baudrillard’s death, the ideas are interesting and the translation compelling, despite the book’s brevity. As in previous works, Baudrillard doesn’t always make his definitions or transitions explicit, and he often leaves the reader feeling there is a paradox lurking close by. Yet the argument comes through clearly, and the implications are there for us to realize, if we wish—for example, that “truth,” “objective reality,” and even “the real” are only human ideas, and the world has no use for them.