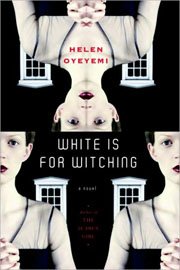 One of the slightly less haunted characters in Helen Oyeyemi’s White is for Witching, attempting to defend the work of Edgar Allen Poe, claims that Poe’s genius lies in “The whole casual horror thing. Like someone standing next to you and screaming their head off and you asking them what the fuck and them stopping for a moment to say ‘Oh, you know, I’m just afraid of Death’ and then they keep on with the screaming.” Here, with a wink, Oyeyemi differentiates her own experiment in the genre. Her work is not the “casual horror” of bloodcurdling shrieks echoing the unspeakable terror of mortality. Rather, hers is a formal horror, shrouded in all the subtle interplay and ironic commentary of contemporary humans. For every ambulatory manikin or voice from within the walls, there’s ample compassion, first-year college angst, and hand-twisted pastries steaming fresh from the oven. Oyeyemi’s technique of frightening involves locating that which unsettles at the periphery—from furniture that has been rearranged in the night to the mound of white-sided winter apples seemingly materialized of their own accord on the kitchen counter, to the distant but persistence presence of anti-immigrant sentiment, race-based violence, and a growing far-right political power in the United Kingdom.

White is for Witching succeeds by being simultaneously a ghost story and a tale of young love, a saga of childhood lost and an allegory on fear-fueled politics. While one character worries that she may be fading into a sketched stick figure or that, in fact, she may have been dead for some time now, Oyeyemi never lets her characters become ciphers or stand-ins. In keeping with her formal dedication to detail at the margins, the minor characters here are as richly textured as the protagonists: the father who lovingly crafts miniature meals to subvert his daughter’s eating disorder, the housekeeper who cuts copies of her father’s tribal scars into her own face.

As the title implies, color takes on talismanic functions in this novel, and its symbolism is multi-faceted. Near the white cliffs of Albion’s shore, twins Miranda and Eliot are raised in their family’s old Dover home, now run as a bed and breakfast by their pastry chef father. Their mother was killed half a world away, but there is a sense that she lingers on not only in their memories. The house itself contributes sections to the tale, told by revolving narrators, but the main focus is, first, Miranda, newly returned home after a clinical institutionalization, and, later, a girl named Ore she meets at Cambridge.

Miranda has an inherited disorder, pica, manifest in the hunger for non-nutritive items. She eschews food, instead eating plastic spoons and sticks of chalk. “Plastic was usually very satisfying. A fifty-millimetre wad of it was tough to chew away from the main body of the strip, but with steady labour, sucking and biting, it curved between the teeth like an extension of the gum, and the thick, bittersweet oils in it streamed down her throat for hours, so long she sometimes forgot and thought her body was producing it, like saliva.” She also begins to hear voices, to see things, and to channel, via automatic writing, her dead female relatives.

While Miranda gets in touch with her ancestors via grinning reflections with jagged teeth and urgent warnings from the children of the departing housekeepers, Ore—who quickly becomes her friend and lover—has adoptive parents that supply her with books on African legends and folklore, wanting to acknowledge Ore’s Nigerian ethnic heritage. So Miranda, in one of the house’s several hidden bomb shelters, muses on her acorn-eating grandmother’s bloody crack-up, and Ore wanders graveyards at night, pondering the story of the Soucouyant, a ravenous monster killed with salt and pepper. Ore is most interested in what the stories don’t speak of—the monster’s origin. How, she wonders, does such a hunger come to be? Miranda asks a not unrelated question of her dead relatives: “How is consumption managed?” When the girls find themselves together in the Dover house, wandering the dark corridors clutching metal blades, their questions—and the fears behind them—clash.

Much horror writing achieves spookiness at the sacrifice of other elements. No one reading Lovecraft, for instance, is ever moved by the description of a meal or the sensual details of a lover’s body. Yet Oyeymi, widely recognized as one of Britain’s most skilled young writers, crafts a tale that haunts on multiple levels. The late teen spunk of Ore, in her first months of college, lingers alongside the cabinet drawers nailed shut to stop their banging. The story of a man who hung himself at the Immigration Removal Centre is as disturbing and unforgettable as the image of Miranda, during a visit to the coast, sitting on one of Dover’s famed white rocks, sucking chalk powder from beneath her fingernails. A spellbinding story, White is for Witching, like all good ghostly yarns, leaves little settled. The temptation, at the end, is to flip back to the beginning and work through the mystery once more.