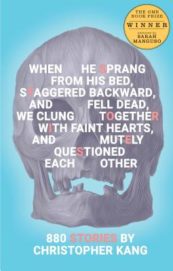 The title of Christopher Kang's collection of 880 micro-stories, When He Sprang From His Bed, Staggered Backward, And Fell Dead, We Clung Together With Faint Hearts, And Mutely Questioned Each Other, reads like many of the stories in the collection itself: sharp, absurd, and rife with provocative, ironic description. There are no named characters, and it's difficult to find a footing in the text initially—Kang relies heavily on the momentum of language to move the first parts of the book forward. The language here is self-conscious, but there is no consistent speaker and no consistent persona to cast as painfully self-aware, caught in their own light. Gradually, however, this book begins to feel like a victory—of the sentence as an able container of meaning, of the story collection as a Hail Mary pass to the reader. The tiny stories in When He Sprang shouldn't necessarily create any coherence of meaning, but they still do. All of the book's gaps and gambles and dizzying insights dare the reader to partake in its construction, in the process of making meaning. Like the uniform human figures in the art of Keith Haring but burdened by the desire to make art themselves, the characters in Kang's work have a sublime anonymity that serves as an efficient explanation of why anyone makes anything: to bang on our own drums, with all our messy ambitions and half-conceived ideas, in the hopes of contributing something meaningful to a broader human music.