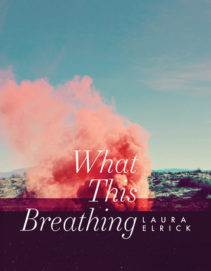 In an interview about the 1979 film Alien, director Ridley Scott stated that he understood the events of that film to be set in the same world as the urban dystopia of Blade Runner. With such classics of science fiction and apocalyptic cinema feeling especially relevant during our pandemic times, this observation regarding the convergent catastrophes of corporate cupidity in deep space and the unlivable environments left to rot down here on earth feels like a key to reading Laura Elrick’s What This Breathing. The space of the book is one of multiple overlapping disasters through which we navigate. The title itself, stripped of a verb that would animate the fragment into a sentence, might be asking “What [is] this breathing,” what is the nature of life right now? But it might also be asking, in the manner of “What, me worry?” (the tagline of Mad magazine mascot Alfred E. Neuman), “What, this breathing?”

The book’s first text, “Mouth Starts,” is titled in the table of contents but not on the page where it appears, signaling that it is intended as a sort of overture. With our mouths we breathe, speak, eat, and sometimes vomit:

is ownerless, my botanies, when it arcs it

or actual my mouth

From the start the poem stages the question of what belongs to us and what is common or taken away by degraded collectivities. The possessive pronoun “my” is obsessively repeated in the text, perhaps because the speaker perceives that it is both “ownerless” and “many-ownered.”

A similar drama attends the deployment of the first-person pronoun, which sometimes functions grammatically as though it were third-person: “I begins to dance?” or “just tell me how much I owes.” The speaker’s estrangement from a language into which we are supposed to fall without reserve (we aren’t supposed to think about whether we are “I” when we say “I”) makes the mask of even what should be the most intimate, evident. As the physical environment is polluted by industrial waste and nuclear disasters, so the linguistic environment becomes toxified by the degradations of language that are its analogues and concomitants: “to be the lie repeatedly, day after day.”

Having seen the world and the word smashed, and being ourselves smashed, it seems that the right response might be to smash back:

You say: the state, police state, patriarchy and its breaks, broken backs and the tanks, bank windows, white power networks, official and unofficial, pharmaceutical capitalists misogynists and terfs, excessive feelings of fear or vulnerability, refugee camps, excessive feelings of power and self-righteousness, museums, cartesian space linear time, putting the brakes on, no brakes and no breaks

Elrick’s voices—for these poems are speeches, as surely as Browning’s are—find the solace of “her whom I loved” even in the battery of an MRI chamber. And since poets are, as Shelley says, “mirrors of the gigantic shadows which futurity casts upon the present,” it’s no wonder that a text preoccupied with emergencies should prefigure much of the tonal center of pandemic life: anxiety, confusion, isolation and broken communication. There are even mysterious visitors “from the epidemic / Center.”

In a short poem, “Slurry Pump,” which may be the book’s ars poetica, the speaker takes a break from wading “through sludge, toward the hull of a rusting ship rent / in half” where they live, to reflect on a past whose “lessons (guppy, minnow, porpoise, shark)” (the grades in YMCA swimming classes) “could have prepared you / for this type of breathing. A poem for the future then.” It is a poem that remembers a world before the devastation and brings that memory into relationship with what breathing is now: airways choked by methane seas, respiratory contagions, and cops. “The Great Dying will nevertheless be lived through / An intersubjective space.” In the midst, the task of speaking and naming abides.