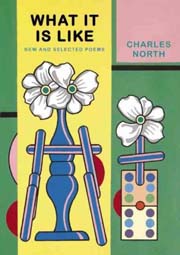 What It Is Like surveys four decades of work by one of America’s most engaging experimental poets. The word “engaging” has old-fashioned connotations that much contemporary experiment seems to repudiate, particularly in its critique of the subjectivity associated with the tradition of lyric. “Engaging” attaches to “personality” to form a cliché. North is fully aware of the modern critique of the subject, though his awareness registers not as a subscription to a program but as a restless—ironically subjective—desire. The first line in this book is: “Now that I am seeing myself as a totally different person.” In a sense, this statement echoes Rimbaud’s famous proclamation, “I am an other” (je est un autre). But whereas Rimbaud’s proclamation is inseparably bound up with his desire to be a seer, for North the act of seeing remains separate from the “I.” The result is, on the one hand, an objectivity of image and, on the other hand, a modesty of tone that, taken together, make North’s poetry so engaging.

Objectivity of image may “originate in a real // Interest in describing what is immediately before us,” but that “what” has traveled a considerable distance by the time it arrives in one of North’s poems. The book’s title is not What It Is, but What It Is Like. The distance is imposed necessarily by the medium of language, and extended in the act of writing, as illustrated in a writing assignment inserted into “Aug.-Dec. for Jimmy Schuyler,” a prose poem in the form of a series of diary entries. (“Ceci n’est pas un diary,” North warns in a later poem composed in the same form). The writing assignment begins, “Describe an object so that its dullness is its virtue,” and the distance begins to open up in the next sentence: “If you have time, describe the same object so that it is at one remove, the dullness leaking out like helium [what is it like] from the best kept balloon.”

As I read this sentence, it involves more than “one remove.” First, there is the removal from “object” to “balloon” performed by the simile. Then, underlying the simile, there is a buried metaphor of “the best kept secret,” a “dull” cliché deceptively brightened by the substitution of “balloon,” but simultaneously deflated by the “leaking” of its secret, the virtue of its dullness. Finally, or rather, initially, the seemingly banal opening of the sentence, “if you have time” —a stock phrase in the language of academic assignments—initiates a progressive extension of temporal distance throughout the remainder of the paragraph, until “all is in the past”:

Be sure to leave time before during and after you write. The sky has so much gray woven into it that blue seems a thing of the past—beyond the striking and ultimately insupportable notion that all is in the past, courtesy of our perceptual workings and all they would embrace.

The objects that North’s poetry describes are always colored by an awareness that “our perceptual workings” occur in time, “the notion that nothing outlasts our fleeting perception of it,” as North puts it in a virtuoso poem, “Shooting for Line.” Although this is a subjective condition, it is universal rather than individual, thus dispelling the air of privacy in traditional lyric. “We know what it is like” is the statement from which the title of North’s book derives. The shared nature of “our” knowledge is one of the reasons North’s work engages the reader. Another reason more specific to the experience of reading, as distinct from the experience of perceiving, is the strange life that language acquires from the death of the object, its removal into the past. North calls this effect “poignant,” which is perhaps a stronger term for what I mean by “engaging.” He defines the effect at the end of “Summer of Living Dangerously”—the “ceci n’est pas un diary” poem—amid a dangerously unpoetic excursion into the philosopher Saul Kripke’s theory of proper names as “rigid designators.” North contends, “the use of a rigid designator for something or someone who no longer exists brings with it a poignancy that can sometimes verge on the intolerable”—“intolerable” here echoing the “insupportable” awareness of time portrayed in “Aug.-Dec. for Jimmy Schuyler.” But North’s analysis of the rigid designator, as it becomes “paler,” less rigid, ultimately less referential, reveals the operation of time in language to be not only tolerable but even strangely desirable: “the non-referential aspect becoming progressively clear as well as progressively poignant over time.”

If the poignancy North describes here is obviously elegiac, the term for the bittersweet savoring of time past in traditional poetry, “the non-referential aspect” highlights the quality of North’s work that is most obviously experimental. In fact, a non-referential extreme (“vieux tub of the fort year”) is reached in poems that North calls “Elegiacal Studies,” which What It Is Like samples from three different moments in North’s career, including the section of “new poems” at the end of the volume. This is just one instance of a use of repetition that not only patterns North’s work—both individual poems and the book as a whole—in a formal sense, but also endows the formal object—poem and book—with the function of image. Repetition measures time, and North’s elegiac sense of time is imaged in the repeating patterns of traditional forms such as sestina, villanelle and pantoum. Forms of his own invention, such as the sixteen-line poems that North simply calls “sixteens,” appear in sequence in the manner of sonnets (“Building Sixteens”) and reappear on separate occasions throughout the volume. Even more striking, as an instance of formal invention, is a set of “translations” in which earlier poems are simultaneously overwritten and recovered. For instance, the first line of “Building Sixteens,” “The building is doughnut-colored light” becomes, “The windowed construction is the rusted color of a cruller.” Buildings and architecture frequently appear in North’s work as images of the poem as construction. North is a New York poet because he lives in New York City, but he is a poet of the New York School because he evokes the urban environment as “a city piled high with representations.” Representations drawn from popular culture—like the doughnuts and crullers in the lines just quoted—help to lighten the elegiac mood with a dash of humor—(and frequently much more than a dash). Although they are not represented in What It Is Like, North is often identified with his “lineups,” arranging virtually anything that can appear in a list—from British poets to body parts—according to baseball batting order and field position.

Humor helps to make North’s poetry engaging because it warns us not to take the poet too seriously while allowing us to take the poetry very seriously indeed. North stands back from the poem out of modesty, but somehow that modesty becomes a necessary condition for the reader’s engagement in the poem, which promotes an awareness that might otherwise prove “intolerable,” “insupportable.” In past poetry, North finds this condition met in “the level motion of the feeling tone” in William Cowper—a rather surprising choice at first encounter, until we recognize that “minor” poets, so-called, are especially likely to exemplify the quality of modesty that inspires North. John Clare is another example he cites repeatedly, as is his New York School predecessor James Schuyler, whom he has described as both “modest” and “minor,” in a sense not at all meant to be disparaging (interview in Pataphysics, spring 2005). In the same sense, these terms apply to North.

Since “comparison to the other arts seems / all but inevitable,” as North notes, it is not surprising that the level tone he seeks in poetry is expressed also in “a certain calm” associated with “Elizabethan & Nova Scotian Music,” the title of North’s first collection (1974). Trained as a musician himself, North is on guard against the “Clarinetist’s Fallacy, coaxing excessive / feeling out of what is essentially a cold instrument,” whether that be a musical instrument or the poet’s instrument of language. In his wife’s art, painting, North shows a predilection for “still lifes as ‘absent-mind,’” though he is quick to acknowledge that impression as an illusion of art. More accurately, painting is an objectification of an inward gaze, an emblem of poetry’s objectivity of image. The title poem of North’s volume comes from a series entitled, with a wry glance at William Carlos Williams, “Pictures from Bruegel.” In this case the particular picture in question shows two monkeys chained to a window sill (1562, Gemäldegalerie, Berlin). “We know what it is like,” North writes, “for them to have given up hope and to look only inward, while appearing to stare at the ring imprisoning them and the space just below the window in front, between it and us.” That is the space, between it and us, in which North engages his reader.

Editor's Note: A version of this review with a formatting error was published in our Print Edition.We are pleased to provide the correct version as the author intended here.