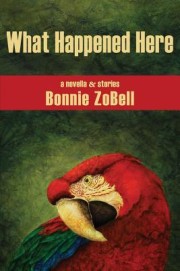 A follow up to her fine chapbook The Whack-Job Girls (Monkey Puzzle, 2013), Bonnie ZoBell’s What Happened Here centers around a thirtieth anniversary party for a 1978 plane crash in a San Diego neighborhood, a real-world event that killed 137 people on board the aircraft and seven others in residences. Each story in the collection attempts to portray a different individual in the neighborhood, giving life to the community and their conflicts as a whole.

The visceral impact of ZoBell’s previous work has fallen to sentimentality in places here. The title novella, about Lenora and her husband John, recounts the latter’s struggle with mental illness, but ends with the couple spreading sage around their backyard to ward off demons and ghosts from the plane crash—a cheap trick for a narrative so invested in deeper issues. In “The Black Sea,” Alexa and Eduardo’s deteriorating marriage is reinvigorated through an encounter on a dirt road with dogs that have had the blood sucked from their carcasses. Rather than delving into the complexities of their relationship, ZoBell relies on the myth of the chupacabra to bring the couple together again: “Eventually, nestled far underneath the covers, listening to the lapping waves, they held each other, slept on and off, fitfully in the heat.”

Although there are a number of shortfalls such as these, two standout stories are “This Time of Night” and “Rocks.” The former recounts Annie and Willy buying a trailer to go camping together, but their vacation to a historic California beach near a nuclear power plant turns into a disaster. Willy’s anger grows in spite of Annie’s optimism, all shadowed by his fight with AIDS and his probable death within three years. The malady acts as a fitting anchor for sentimentality, much better than mentions of a mythical creature or ritual.

“Rocks” does something similar with Lolly, a tour guide in Sedona, Arizona who ran away from her physically abusive husband Roy. The setting seems to reflect Lolly’s desire for anonymity and fear of her husband: “Giant rock formations inflame the town, russet pebbles live naturally by the side of the road, maroon homes made of adobe seem carved out of the pinnacles instead of built new.” Here, spiritual ritual and sentimentality meet in a visceral moment and sentences breathe out the violent yet beautiful nature of human relationships.

What Happened Here attempts to create portraits of people living in the aftermath of a deadly plane crash. ZoBell attempts something Faulkner did so brilliantly in his portraits of men and woman from the south. If it doesn’t always succeed, the text at least shows how difficult it is to write excellent short fiction—and what’s at stake in trying to do so.