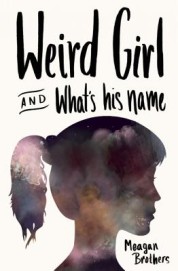 In Weird Girl and What’s His Name, Meagan Brothers’s crisp, compassionate novel for young adults, all of these questions are explored from various character perspectives, not least those of the two protagonists. Lula and Rory are high school juniors in a midsize town in the southern U.S. They are passionate fans of the X-Files, among other sci-fi mythspaces, and so inseparable that they are frequently mistaken as a romantic couple, even by their families. But their relationship doesn’t exactly fit into that sort of box; Rory is gay, and although he is out to Lula, she secretly nurses the notion that eventually he will take their obvious love into a more physical and socially legible realm.

Things become unstable when Lula discovers some things Rory has been keeping from her. These are vital plot points, which I won’t expose here, but the discovery of these communicative omissions on Rory’s part tips Lula into panic, as they emerge in the context of some struggles of her own. Lula and Rory’s failure to communicate catalyzes the young woman’s cross-country flight, at the end of which she hopes to find her mother. She succeeds, eventually, but the experience is not what she wanted it to be. No one waves a magic wand, validates her existence and lovability, and fixes her. Like the rest of us, she must learn how to do that for herself.

Communication failures and blocks figure heavily in the overall story, manifesting in plausible and varied ways within several character relationships. Yet there’s a great validating force at work in this book. One amazingly well handled area is the portrayal of Lula’s mom, an actor who chose not to raise her daughter herself. Lula’s experience of this choice is honored; she feels it as a rejection, and thinks of her mother as selfish in that regard. But it does not feel as though the author herself agrees with her character, which is refreshing. Brothers’ treatment of all her characters seems similarly fair-minded, giving them depth and complexity—even Rory’s mother, an alcoholic whose homophobic rage results in Rory’s expulsion from his home. Her behavior is not excusable, but will certainly be recognizable to many readers, and her own suffering is obvious.

Through her journey Lula comes to understand that her own desire is fluid (or at least is not entirely dependent on physical attributes or gender), but she can’t quite believe she’s good enough for anyone else:

“Deep down, I want . . . I want somebody who sees me. I mean, really sees me. Sees everything I am, even all the horrible things I am. My dirty mouth and my stupid X-Files action figures and my total failure at graduating from high school and my messed-up mom and my crazy grandparents. I just want somebody who sees all that but . . . loves me anyway.”

This desire and this insecurity are so strong, so basic to everyday human self-doubt, that their direct portrayal is vital here. Similar compassion and accuracy is present in the way sexual identity is folded into the overall calibration of selfhood that is so very important to young people. Rory and Lula aren’t who they are because they are gay, questioning, queer or whatever. The things that happen to them, and the choices they make, are not reduced to some artificial causal relationship that casts sexual identity as a personality determinant rather than one element of self. These kids are complex people: vulnerable and brave, stubborn and giving. Indeed, the complexity of personality, identity and desire is a very present theme here, and the characters themselves often engage it. Here’s a great example, as Lula and a friend, Seth, discuss the mysterious allure of various fandoms:

Seth paused, kneeling on his carpet. He shook his head. ‘Why do we love this stuff?”
“What, music?”
“Anything! Why do we love anything?”

Lula’s rich answer is a bit later in the conversation:

We need to love as much as we need to be loved. No matter who we are, we seek the experience of joy, and the inexplicable resonance or validation of whatever gives us joy, whether it’s Star Trek, Indian food, stock car racing, or water ballet. That’s why mockery or dismissal of these touchstones can feel so threatening.

This is not a “gay book for teens.” It’s a book inclusive of teen readers—yes, queer teens and geeky teens—many of whom will recognize themselves and their challenges in its pages. Adult readers will certainly recognize themselves in this book as well, from many different angles and in many different phases of life. We can all gain some insight from Sam Lidell, English teacher extraordinaire:

“ . . . if you haven’t figured it out by now, then let me assure you, Lula—nobody’s normal. And pretty much everybody you meet in life is trying to figure out how to be a so-called ‘normal person.’ As if it’s some fixed point that you reach, like zero degrees Celsius. But everybody’s just who they are. Weird, flawed, good at some things, bad at others. There’s no one single person who’s doing everything right all the time. Trust me on that. There is no such thing as normal.”

This is part of the compassionate work of Weird Girl and What’s His Name. It’s a story in which nobody really “gets it right”—except, paradoxically, by blundering along and living anyway, in spite of all that so-called failure.