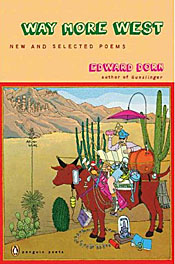 With the publication of Edward Dorn’s Way More West, it’s now possible within the context of a single volume to gauge the wide range and scope of the career of one of the most significant and controversial poets included under the rubric of the New American Poetry. Constantly ahead of his time, much of Dorn’s work in Way More Westseems more timely and appropriate now than when it was originally written. And although closely affiliated with the postmodernism partially ushered in by his teacher at Black Mountain College, Charles Olson, Dorn’s connection and allegiance to the American West, along with his blue collar roots, made him something of a throwback, a consummate American poet with the sort of self-made, autodidactic pedigree most MFA students could only dream of. But Dorn was also an iconoclast and a rattler of cages, unafraid to mix politics with poetry, which made him suspect to many of his peers, and the subject of much criticism, including a recent harsh blog-lashing from Ron Silliman.

Edited by Michael Rothenberg and with an introduction by Dale Smith, Way More West contains generous selections from Dorn’s entire career—published and unpublished—including the completeRecollections of Gran Apachería, as well as the first book of Gunslinger, the comic-epic masterpiece first published by Black Sparrow Press in 1968 that established Dorn’s reputation as a serious contender. From the early Frost-like elegiac poems such as “The Rick of Green Wood,” originally included in Don Allen’sThe New American Poetry, all the way up to the thoroughly postmodern Languedoc Variorum: A Defense of Heresy and Heretics, and the final, harrowing Chemo Sábe, written literally on Dorn’s deathbed in the haze of chemotherapy, we see the constant unfolding of a poetry of total engagement—be it with the places and persona of the American West, his ongoing criticism of “The Age of Affluence” and its corrupt politics, or simply the enlightening and tempering solace experienced in observing a rose from the window of his hospital room just prior to his death from pancreatic cancer in 1999 at the age of 70.

The jagged trajectory of Dorn’s peripatetic life (first as an itinerant worker in the American West, later as a teacher across America and Europe) is mirrored in the continuous stylistic metamorphoses of his writing, which become all the more apparent when followed chronologically in this collection. Dorn has been taken to task by some critics for allegedly abandoning the lyrical/poetical for the satirical/political, which became the focal point of much of his post-Gunslinger work, culminating in collections of terse epigrammatic pieces such as Hello, La Jolla, Yellow Lola and Abhorrences, and addressed again inLanguedoc Variorum, where he took on the Cathars, the Reformation, Columbus, Stalin, the Balkan war, AIDS, McDonald’s, and digital communication. But seen in the context of his entire oeuvre, Dorn’s concerns here merely confirm the workings of his acutely intelligent and critical mind, as well as his disregard for convention, or what would eventually become known as “political correctness.” He was also obviously still cleaving to what he learned at Black Mountain by way of Robert Creeley and Charles Olson—that “Form is never more than an extension of content.” Despite the many variances in approach to his subject matter, Dorn was ultimately a poet of consistence and integrity; he wrote about what moved him, not about what he thought might move others. And therein lays Dorn’s legacy, which could well serve as an aesthetic template for all future poets.

Contrary to what Ron Silliman or August Kleinzahler have said in their reviews of Way More West—that Dorn’s politics undermined or undercut his later poetry—seen as a part of the greater whole, these later poems further expand the Dorn oeuvre into something much larger than other poets of his generation were ever able to achieve. As Smith says in his introduction, “no poet of the postwar era addressed the conflicting public interests of American democracy with the same rhetorical force as Edward Dorn. Whether he wrote with passionate lyricism or scathing satire, he always argued for the principles of locality against the self-interests often embedded in social and political abstractions.” Despite the obvious alliances and associations, Dorn was a no-school, coterie-eschewing lone wolf whose wily grace and critical intelligence still shine today, continuing to polarize and galvanize from beyond the grave.

Dorn engaged in some substance abuse in later years, along with some questionable and alienating behavior, but he remained a true poet to the very end. That he was both fully engaged and coherent up until the end is made painfully evident in “The Garden of the White Rose,” the final poem in Way More West and apparently one of the last poems he wrote:

Lord, your mercy is stretched so thin
to accommodate the trembling earth—
How can I solicit even
a particle of it
for the relief of my singularity
the single White Rose
across the garden will
return next year
identical to your faith—
the White Rose, whose
house is light against the
threatening darkness.

Way More West is the latest in the Penguin Poets series of one-volume collections of postwar American poets from the western part of the country (previous volumes, all edited by Michael Rothenberg, include books by Philip Whalen, Joanne Kyger and David Meltzer). Considering how much of Dorn’s work is out of print and unavailable, the book is a terrific boon to all those interested in becoming familiar—or reconnecting—with a unique, contentious, and very American poet.