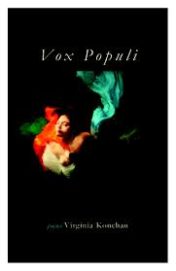 Virginia Konchan's chapbook Vox Populi is a long poem divided into sections, each a distinct celebration of a letter of the alphabet. From the moment the reader embarks upon this voyage with the letter A (“A is for amoeba, autocorrect of the leitmotif, / asset price bubbles, aristocracy and architecture . . .”) it becomes clear that this poem is a celebration of the various.

This poem is as much a subversion of hierarchy (showing its biomorphism rather than its vertical linearity) as it is a volley aimed at the increasingly fashionable world of prosaic poetry. Pulled into its gravitational field, the reader feels herself willfully suspending all else to become awash in its wallop:

D is for dynasty, enlightened despots in fluted collars
waving white kerchiefs from a balcony, sacrificial
ablutions performed by Alyosha Karamazov,
sainthood and its double, demonology,
inscribed in Dostoevskian tomes.

and later in the same poem:

Vox Populi takes risks and covers vast distances in world history, illustrating its depth of knowledge, yet retains its simple love of the mellifluousness of the right words in right places. It celebrates the electric current of language, becoming most alive when it revels in the miracle of language with use of assonance, consonance, alliteration, and onomatopoeia.

The speaker, if there is a traditional speaker in this poem, is a disembodied singer, listing our more recent woes (“F is for failure of fiduciary funds”) and also those ancient (“Abraham's inexorable hand/severed the head of the lamb”). This is not so much a speech-based poetics but more of an elevated and sophisticated gesture that gathers momentum and stands as a monumental compendium of the vernacular. Its joys may not be readily apparent, as the nuances and crevices in this type of writing reveal themselves only gradually as each steep cliff face is scaled. Here is one of the sections in its entirety:

K is for Tennyson's Kraken:
cretin emerging, without fins,
from watery climes. Klimt's fame
sealed with his 1908 painting
The Kiss, housed in Vienna at the
Österreichische Galerie Belvedere.
K: the only letter to keep a straight
back with its two remaining limbs
squall, rooting for a truce between
hyla ("from the forest": paper, fuel)
and squid ink of Apollonic altitude.
The sun's dimmer switch, Jupiter,
kvetches: beta-god self-berating
as it keens toward oblivion (air).

To imagine the letter K as a spectral figure in a battle of writing between paper and ink leads me to believe this is a poet for whom language serves as more than just a scaffold for what one has to "say." Thank god! The beautiful truths in this chapbook involve human priorities and a struggle for equilibrium in a world that is in flux.

Despite its abecedarian structure, Vox Populi is refreshingly free of gimmicks. The poet relies on the brilliance inherent in the language to illustrate salient points and doesn't shock for the mere sake of doing so. This is, indeed, a poetry of restraint, but it imparts a mystique that could be described as wanton and wild, although still cerebral. Polish Hasidim believed that a "pneuma" (spirit breath) lived in the pages of the most sacred texts; the pages of this witty 26-part poem exhale the breezes of the natural world when all the pages of history are being blown away before our eyes.