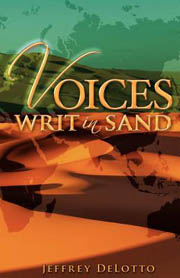 History and nature in tooth and claw haunt Voices Writ in Sand, Jeffrey DeLotto’s collection of poems and dramatic monologues representing more than two decades of writing. DeLotto’s landscape is primarily the American South, especially the Gulf Coast before it became a tourist mecca, although the poems also make forays into Bulgaria, Jordan, England, Wyoming, and Tanzania—places DeLotto has lived or visited.

Many people forget that before the advent of air conditioning, the Gulf Coast from Texas to Florida was a frontier, with an unforgiving climate, an abundance of wild animals, and a mixture of races, including a large Native American population. In poems such as “Geronimo,” “A Karankawa,” and “Two Hawks Kindles a Morning Fire,” DeLotto makes that past live again in powerful narratives of war, cannibalism, and suicide.

In “A Karankawa,” DeLotto describes this Texan tribe’s ritual cannibalism of their captives, in the belief that eating the captive's flesh would transfer the captive's power and strength to those who consumed him.

. . . That last slice I took,
From your lower back, just a hand’s length piece,
The width and depth of the middle finger I lost
To the snapping jaws of that wild pig four seasons
Past, you faced it like a man, until you saw it spit
And crackle over the fire, until my first slow bite.

The poem’s themes twist on themselves, as the Karankawa speaker looks ahead to a time when his people will have become extinct:

But I look at this bleeding man and
Have to wonder what drove him here, and will I feel
That pull, and how many more will we share into our
Bodies until our spirits become theirs?

For DeLotto, Florida also represents his youthful Eden, where he wandered free and experienced a fall from grace, memorably recalled in poems such as “An Unfortunate Encounter with a Lady,” “As a Boy,” “Smelling salt in an on-shore breeze,” “A Memory Among the Islands,” and “Islamorada.” In many of these poems, fishing serves as a touchstone, introducing the youthful protagonist to the inexhaustible subjects of death and suffering. The “lady” in the first poem is a soft-shelled turtle that he caught on his hook, landed on the dock, and inexpertly tried to free:

blood smearing a jaw and face wrenched awry
In brute force, her eye all the while impassive to a world
Where suffering is commonplace.

Animals are a frequent subject of DeLotto’s poetry. Like the poems of Ted Hughes, DeLotto’s animal poems closely examine the connection and dissociation between animals and ourselves without sentimentality. In his observations, the poet finds moral lessons. Three of my favorites are “A Cardinal’s War,” “A Box of Crabs,” and “On Finding a Grey Fox.” In “A Cardinal’s War,” the poet identifies a cardinal’s attack on its reflection in plate glass with his own futile battles with himself:

In “On Finding a Grey Fox,” the twelve-year-old protagonist rescues a sick fox and nurses him back to health, mistakenly thinking his loving treatment will tame the animal; years will pass before he can accept that his failure was inevitable.

Mother said to me he’s not yours and he
Will never be. He’s wild and belongs only
To himself—and to the woods, she added.
You’ll have to let him go, she said,
And so we did, out into the Everglades,
Then only the wildness left, and I felt
Loss and waste, and understood not a thing.

The title, Voices Writ in Sand, contains a reference to Keats’ famous epigraph on his tombstone: “Here lies one whose name was writ in water.” Voices Writ in Sand is DeLotto’s evocation of those who might otherwise be forgotten. Some poems evoke troubling voices whom we might like to forget: not only the cannibal, but the murderer rapist of “Route 35,” who threatens his victim:

You want to do it alive or dead? Believe me,
Darlin’, I can make it happen either way, and
If your heart isn’t in it, I’ll just pop-pop and make
Up the sounds myself.

Other poems feature a daughter appropriating her mother’s assets with complete self-justification in “More Papers,” a Confederate soldier experiencing the death of a comrade in “The Wilderness,” a Jordan refugee camp’s hopelessness in “Al-Husn,” and British soldiers who fell in the Salonika campaign in the first World War in “St. Archangel Cemetery.” DeLotto’s supple, long poetic line, often loose iambic pentameter, accommodates his ambitious range of characters and subjects. His descriptions are particular and beautiful, as in this one of rising floodwaters in “A Trinity Flood:”

. . . like milk welling
Out of a bottle filled by a distracted hand, like milk
Washing out almost oily onto a table, spreading past
Trees, around houses, over streets, picking up the
Dust and straw and forgotten tins and sacks, rising
Heavy like spilled milk . . .

The harmony with nature and family affection joyfully experienced in poems such as “A Morning Start” and “On the Point” counterbalance DeLotto’s more somber themes:

Narratives of the dangerous and the endangered, the poems in Voices Writ in Sand comprise a complex and fruitful collection, at times terrifying, astonishing, meditative, and loving, that continue to reward on successive readings.