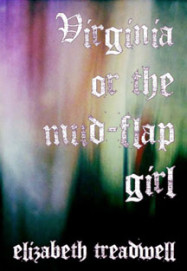 You can easily read Elizabeth Treadwell’s Virginia or the mud-flap girl on a single descent from altitude if you like: the book’s ninety-some pages are sparely printed with brief, short-lined poems whose syntax isn’t so much compressed, in the manner of the Metaphysicals, as eroded, seemingly beyond recovery. Repeats, refrains, a minimum of apparatus, and Treadwell’s habit of cutting her lines mostly at natural breaks all contribute to a speedy reading. Moreover, nothing of great emotional moment will slow you down if you don’t want it to: Treadwell doesn’t present a self in need of empathy, and lines like “the death of culture as a fragmentary state” exist themselves only in a fragmentary state, as if scurf flaking from an old scar.

The canny reader will not get this far without suspecting a reversal, though—and sure enough, a second reading of this book can feel as different from the first as the situation on the ground from the aerial view. On this closer view, Treadwell shows as a next-generation, California-addled Susan Howe, mashing Mae West, John Rolfe, Vine Deloria Jr., and others into a new history of America, one in which the current USA—Hollywood, politics, avant-garde poetry, “all the handsome signifiers / in the village heap” —is the scab and 1492’s contact the fresh wound we still feel. Treadwell’s version of that contact is original, physical, your-virus-meets-my-virus, but also linguistic and ideological: your culture virus meets my culture virus, Indian mound as investment bank/Metropolitan Museum, or as she puts it:

oh so soonly shall we toil
our awesome landfills

all the pick-magic some forlorn
source faces

Admittedly, Treadwell’s syntax makes any statement of her aim an overstatement. Agent and event are rarely clear; instead, her writing is miasmatic. A pungent scent of old blood and tidal swamp rises from her sharded and mulched wordstuff—and you’ll smell its reek more clearly if you supplement her book with some research into early America. Take the poem “P. vivax”:

a little god comes in & protests
will as extensity holler
in all your original flapping sins,
your 17th century arcade
beating down staunchest river
some summer slag-heap
in theory butler
bitten, plow
some jailed hintback
in the doctorlight

If the opening presents an attempt to master wilderness, the last few lines trade grammatical coherence for obscure suggestion. But what is it about? P. vivax is the parasite that causes malaria. Some say malaria killed Pocahontas; malaria certainly decimated Native Americans along the East Coast, and was a leading reason for planters to import African slaves, who were often already immune to the parasite. Treadwell points readers to the research (and perhaps to Judith Butler as well) as she breaks up English like a prisoner fashioning a shiv from a toothbrush.

This pointed desperation sets her writing apart from the “avant-garde” she amusingly lampoons throughout Virginia—for example, in the single couplet of “spot”:

Of course, this is a straw man: there is no unified avant-garde. But Treadwell uses it to critique certain elements of contemporary poetry: its “fake relevance” and “crap manliness,” its “lite toxicity” and “unhinged sanctimony.” Her poetry may look avant-garde, with its erratic punctuation and capricious capitals, but innovation for its own sake is alien to her. Instead, she deranges language to express dream changes and ecological emotion, much in the line of feminist theorists who seek a sentence without phallocentric subjectivity.

Unfortunately, sentences without subjects often frustrate readers; poems without clear syntactical connections may come across as mere descriptive clouds; and poetry that can be ignored probably will be. Clearly, this is a risk Treadwell is willing to take—or maybe must take if she wants to get the reader to imagine something really different. This different vista is nothing less than a new Eden: a wild America whose fertility does not demand rape and control. Dimly, Treadwell discloses hints of this dirty Paradise—as in the title poem: