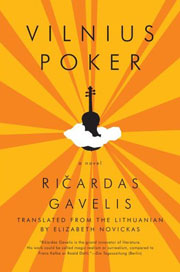 As Vilnius Poker begins, the main character, Vytautus Vargalys, has to go to work just like any other citizen in 1970s Lithuania—no matter that he is plagued by sustained paranoia, psychotic visions and flashbacks from nine years spent in a Soviet labor camp. Vargalys gets in a trolley car and rides through the hellish husk of a city that is Soviet-occupied Vilnius. He arrives at the library (where he directs a project that the Moscow higher-ups have told him he must not complete) and sits at his desk with his phone unplugged and his head in his hands. At ten o’clock, one of his assistants pops her head into his office: it’s time for a coffee break. If this seems like a bland beginning to a novel, it’s not. Vargalys’s visions infuse these mundane events with the following: he is almost murdered by a limousine; he becomes terrified because of some supposedly disappearing-and-reappearing pigeons; he shrinks from the seductive glare of a real-life Circe; and he discusses the existence of Them, the evil entities against whom he is fighting. And this is just in the first eight pages.

The author of Vilnius Poker, Ričardas Gavelis, was considered Lithuania’s greatest novelist before his death in 2002. This novel, written from 1979 to 1987, captures the psychology of a protagonist tortured by his history and unable to explain his present-day life. The character, Vargalys, grew up in a small Lithuanian village fighting the Poles only to be caught by the Russians at age nineteen and sent to a gulag, where he endured unspeakable torture. After nine years he was released and sent to Vilnius. He forthwith became a drunk on skid row. After several years, a woman took a liking to him and pulled him from the gutter. He married her, became happy and sober for a brief time, only to realize that his wife was slowly becoming one of Them—so he divorced her. The Vargalys of the novel is a long-time bachelor trying to reconcile his current life as penurious, ineffectual bureaucrat with the struggle and pain he’d endured in his previous life; he’d fought for a sovereign Lithuania, for a more compassionate humanity. What he got was a hopeless job, a ruined country and the indignity of seeing his torturers walking around the streets of Vilnius, happier and more prosperous than he. So it’s no wonder that the intelligent and once-vital Vargalys obsesses over ideas like these:

A hundred times I tried to logically refute Their existence. But I reached the opposite goal—I unarguably proved that They really exist. The simplest proof—an argument ad absurdum. Let’s sayThey don’t exist. There is no such subspecies of live creatures whose sole purpose is to kanuk people, to take away their intellectual and spiritual powers; that kingdom of sullen flat faces doesn’t exist. Let’s say none of that exists.
Then how can you explain humanity’s structure, all the world’s societies, all human communities, their aspirations and modes of existence? How can you explain that always and everywhere, as far as you can see, one idiot rules a thousand intelligent people, and they quietly obey? Whence comes the silent gray majority in every society? Would a person who wasn’t kanuked think of vegetating in a soulless condition and say that’s the way everything should be? Why is it always enough to arrest a thousand for the just cause of a million to be doomed? Who raises and sets all governments on the throne, who hands the scepter to Satan’s servants—to all sorts of Stalins, Hitlers or Pol Pots? How do thousands, even millions of people disappear in the presence of all, and the others supposedly don’t even notice?

While the reader never finds out exactly who They are, nor exactly what They want (which only serves to further prove Their existence), Gavelis does an excellent job of providing glimpses of the very real, very quotidian horrors of Communist rule. So much so that when the narrator changes to the fallen educational theorist, Martynas Poska, we bitterly laugh along with him when he explains: “Colon cancer was on the verge of consuming [Vargalys’s grandfather]; they kicked him out of the hospital the last few weeks. The usual thing: so he wouldn’t up and die on them and ruin the hospital’s mortality statistics. It just so happened that the clinics were fighting to lower their mortality rating at the time.”

Despite the Gavelis’s impressive dry humor and psychological insight, Vilnius Poker suffers from being overwrought; when Gavelis strays from concrete descriptions or specific philosophical theories, his characters expound hopelessly recursive, self-involved national solipsism for pages upon pages. Perhaps most indicative of this is the characters’ tendency to anthropomorphize Vilnius itself, saying things like, “I don’t know what Vilnius is. Maybe Vilnius knows what I am?” and “In my human life I had a purpose: to run as far as possible from here, as far as possible from the soullessness of Vilnius, from that moribund city’s despair.” The end result is that Gavelis’s argument loses some force—he protests too much, too simplistically, and too repetitively. A novel 200 pages slimmer might better bring home the point that Vilnius, Lithuania, was the “Ass of the Universe” in the 1970s. Regardless, readers who are fascinated by Eastern Bloc literature, by the psychology of occupation and by the absurd Catch-22s of bureaucracy will enjoy Vilnius Poker. There’s a lot here: passion, madmen, crushed hope, a stinking city and the stench of human rubble. All of which makes it worth the extra pages.