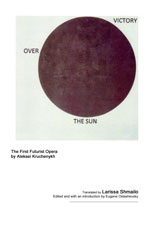 The confrontational Victory Over the Sun debuted in 1913 to the same jeers that “provided the ordinary soundtrack to avant-garde art” at the time (fellow Russian Igor Stravinsky’s famously divisive Rite of Spring premiered the same year). Eschewing representation in favor of a “millenarian” deconstruction of logic and meaning, Futurism’s core themes are all here: a blustering masculinist posture that doesn’t quite ring true; a flippant heroization of violence (so poignant and stupid on the eve of total war); and a ceaseless enthusiasm for an “extraordinary” present sans past, “dangerous but without penitence and memories . . . like a clean mirror.” This aggressive agenda of total deconstruction feels intoxicating and disconsolate—the liberation of words from meaning and now from then is both exhilarating and “pretty damn scary.” As Eugene Ostashevsky notes in his introduction, Futurist “victories” represent desperate, nonsensical losses: “The sun of alogism is a black sun.” Yet Kruchenykh’s nonsense is aphoristic, funny, and even sentimental; it can have as much meaning as the reader is able to imbue. Even those uninterested in the avant-garde may find something worthwhile in Victory Over the Sun—the work proves that there’s value in being provoked and (to paraphrase another great Futurist), a certain pleasure in being jeered and in being defied to jeer. Or, to put it more succinctly: “Can’t stand it? Follow that.”