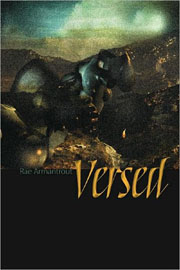 This is the age of hyperbole: fragments of pop culture quarrel for our attentions as conflicting messages land like rain. Amid the contradictions and noisy exaggerations, our suspicions become necessary agencies of preservation. In this commercial world with so little one can trust, reservation is more than a safeguard against pretense and deceit; it can be an approach which both channels and renews our hope.

Rae Armantrout’s recent collection of poems, Versed, suspects much. Preoccupied with modes of communication and intentions, Versed is the poetry of this and that; its poems do not waver in their determination to sort out what goes with what. The work searches out and underlines duplicity wherever it is encountered, and challenges insincerity with a clinical precision. Armantrout’s spare, almost skeletal poems render illustrations that are immediately recognizable, yet shocking nevertheless. Icons once considered innocent and meaningless are exposed. In “Outer,” Armantrout challenges childhood playthings: “Dolls as celebrities (Barbie); / celebrities as dolls,” and the influence of these symbols regarding self-identity: “To see yourself as if from the outside—though not as / others see you.”

Armantrout’s poems paraphrase every unsaid thought regarding the addictions of free enterprise—those scrawling, freeway billboards and piercing tabloid headlines which apportion worth, or the countless reality television programs which appear more genuine than our everyday lives. These processes of messaging, Versed argues, repeat themselves and imprint their reflections in our dead stares until we record the world as slogans and campaigns, rather than as things truly are. Poems like “Dilation” distrust motive and intent, and suggest we do the same:

on the “It Girl’s”
production

A surface
composed of flicker
and twinge

Those who obediently swallow the images and incentives which popular culture so readily presents, Armantrout cautions, become commodities; they are the social capital our industries chain to the floor in order to sustain positions of power and authority. Filtered through Armantrout’s intense skepticism, one grasps that there is little, if anything, in which to trust. Each message and its surface “flicker” deserve our scrutiny. She reiterates this position in the opening section to “Results”:

Click here to vote
on who’s ripe
for a makeover

in this series pilot.

Votes are registered
at the server
and sent back

Are we participants, Armantrout wonders, or just the expression of an intrusive relationship imposed by consumerism and enterprise? Are we contestants, or results?

Armantrout’s poetry implies many answers, and yet it intentionally sidesteps declaring any absolutes. For this poet, the issues at stake are those viewpoints each reader carries with them, and not so much the questions any single poem or sequence may pose. With no clear solutions to the difficulties of misinformation, Armantrout leaves the interpretation of a poem’s possible connotations with her audience. Her work believes any situation cradles a distinct reading in either fist—its “this and that” attributes. What her poetry argues for, above all else, is that awareness should inform any decision regarding culture and its persuasive messages. “Pleasure,” discloses the importance of recognizing these distinctions:

This sense of
my senses

being mine
is what passes

How to distinguish one
light from the next?

Only distinctions can
matter.

Doubt the honesty of one’s own senses and don’t relax your guard for a moment, unless you can discriminate between each possibility. The light—any situation’s meaning—is indeterminate until differences are established and defined. Recognition, the understanding of multiple outcomes, is what matters most.

There is pleasure in the moment of sifting “this” from “that.” With “Name Calling,” Armantrout suggests that commodities are impractical and lonesome—“Objects are silly”—but “the resilience / of open-ended / questions,” through which we interrogate slogans and propaganda, is buoyant and durable. Such questions challenge inferences, and are particularly useful when exercised in deconstructive ways. Use your suspicion, Armantrout reasons, to “pinch off” phallocentric assumptions and the yield is “What comes to / be called pleasure.”

Language is the razor Rae Armantrout twists throughout Versed. Each poem stands alone as an observation, or an opportunity to investigate paradox. Language used dishonestly disguises, but whenever Armantrout speaks, readers recognize what language, wielded advantageously, can achieve. Her poetry’s outcomes suggest there are second possibilities to choose from, as the concluding lines to “Scumble” imply:

What if “of” were such a hot button?

What if there were a hidden pleasure
in calling one thing
by another’s name?

Armantrout takes satisfaction from dividing popular culture’s misinformation and half-truths, and revealing their more baleful intent. Give one thing another name, she asks, and make what is concealed clear. An awareness of the art of messaging and the possibility of multiple readings redirects the pendulum of authority in our favor.

Armantrout’s poems may seem bleak, but they are not without hope. Her work petitions for awareness. Whenever we are mindful, or “versed,” we no longer accept the first interpretation presented, but choose instead from whichever options best fit, as she clearly states with “Fact”:

Each material
fact
is a pose,

an answer
waiting to be chosen.

In poem after poem, what astounds most are the ways Armantrout’s spare lines tease up an understanding of the ways we overlook the deceptions our system and its values promote. Worth is assigned in fame and price tags. We are told what to believe. Rae Armantrout, with concision, simplicity, black humor, and unexpected gentleness, points these things out and nudges us to consider carefully the messages we receive.

While Armantrout’s poetry is minimal, and its diction isn’t difficult, her arrangements may, at times, seem ambiguous and discouraging. This said, the topics Versed confronts are tricky and uncertain themselves. If a lack of resolution frustrates some readers, those who pay careful attention will find profound lessons delivered with a wry and deadpan wit. Her work contains universal warnings regarding the influence of popular culture, and exhorts us to think deeply and strive for something more fulfilling than the images we receive. As she implies in “Birth Order,” the favorable prospects that watchfulness and a careful attention can tender aren’t so difficult to achieve:

Anyone
could write this.