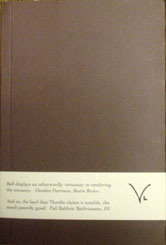 And out went Vera and Linus with a large knife and a bag, for hunting children's hands.

There is probably no better place to begin a brief comment on this strangely sexy, agreeably scary collaborative compendium than with the above image of its two protagonists gaily heading out to do a little hand collecting, for these two mysterious beings, carved straight out of the space of fairy tale—Hansel and Gretel all grown up with a shed full of axes to grind—never tire of the simple pleasures of killing, collecting, burning, maiming and holding captive. Nor do they limit their murderous attentions to those outside of their heinous, happy twosome:

He took her and plunged her head in water.

—Have a little death, he said. For I am to bake a pie tonight and there must be death in the house.

Vera, of course, pops right back up to star in more than her share of subsequent episodes, just as Linus's hand quickly heals from the gouge Vera cuts in it, which makes good sense, because the territory Ball and Björnsdottir chart here is one in which death definitely has no dominion (even the protruding hand of a child they have buried alive during one of their jags remains warm months later); rather, a kind of low-stakes, light-hearted cruelty does. Indeed, over and over again the distant, twisted Neverneverland of quiet childhoods is called to mind as one reads, that space where one might lay siege to an ant colony with a magnifying glass, pretend to kill a couple hundred bad guys with a dream Uzi, lock a favorite doll up in the closet, then cackle about it all with a friend over a glass of chocolate milk. Childhood has never looked better and worse: Proust's lost paradise re-envisioned as a kind of tender hell.

For all its pleasures, Vera & Linus could have stood a bit of pruning, in particular in some of its longer pieces. Still, on the whole this handsome, pocket-sized, illustrated and indexed cross between the Brothers Grimm, Marquis de Sade, Peter Pan and Georges Perec is a great success.