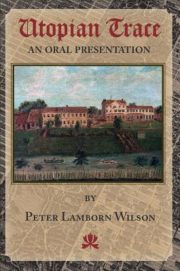 Peter Lamborn Wilson first entered my mind a quarter-century ago when he broadcast two-hour monologues on various subjects weekly over the local Pacifica radio station. What caught my attention was not only his verbal facility and impressive learning, but the depth and originality of his anarchism. As he synthesized the classical curriculum of Manhattan’s Columbia College (before he dropped out) with certain exotic interests and experience, he thought like no other American intellectual. Thanks to a modest inheritance from maiden aunts, PLW, as he is known, became one of those rare congenital independents who could spend all day in a library reading, remembering, and rethinking.

The publisher of Logosophia Books, a small press in Asheville, North Carolina, decided that one of these broadcasts, an appreciation of Manhattan’s Central Park, should become the subject of a thin book that regards its architect Frederick Law Olmstead (1822-1903) as “a hero of the people.” In PLW’s printed interpretation, this American practiced the thought of the French philosopher Charles Fourier (1772-1837) and influenced a New Jersey commune called the North American Phalanx.

For the epithet “utopian trace,” PLW draws upon two posthumously published (and assembled) texts by the German philosopher Walter Benjamin—not only the famed The Arcades Project, but a shorter fugitive text literally titled “Central Park” (though it’s really about something else and its author never actually visited New York). This resonance informs the text in ways that readers of Benjamin will appreciate.

While PLW finds a mellow anarchy (and libertarian heaven) in his subject matter, in focusing upon New York City’s magnificent parks, he fails to appreciate that NYC is also a great beach city, on the same rank as Rio de Janiero, Berlin, or Tel-Aviv—all of which have several public beaches that are easily accessible by cheap public transport. I’m speaking not only of Coney Island, which has been a proletarian playground since the 19th century, and Orchard Beach in the Bronx, both situated on protected bays, but the Rockaways, which offers several miles of sand along an Atlantic Ocean that can often be unruly.

While Utopian Trace is well and good, it scarcely represents the breadth of PLW’s interests, which have included Sufi traditions, Islamic art, pirates, peaceful secession, angels, American anarchism, and much else. Under the pseudonym Hakim Bey he published T.A.Z.: The Temporary Autonomous Zone (Autonomedia, 1991), his single most influential text; the work is a paean to chaos that has had surprising influences, as the strongest books do as they make their way in the world. Influence notwithstanding, nearly all PLW books have come not from profit-minded commercial publishers but from smaller presses whose governing editorial principle is not profit but love.