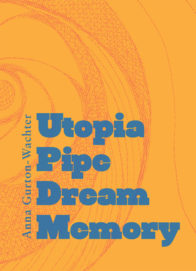 Utopia springs from our mammal form, from the conversation happening across distances, but also in proximity with whom we share a mode of being, a mood. Anna Gurton-Wachter’s debut poetry collection, Utopia Pipe Dream Memory, is a feminist affirmation of the multivocality of writing, the force of artistic communities, and the visionary as aesthetic principle. The poet converses intimately with artists past and present, whose bubbling impulses arrive in workshops and books, and the art beckoning in embodied spells, such as La Monte Young and Marian Zazaeela’s permanent sound installation Dream House. These poems suggest that communities are laboratories of the mind, where reveries seize bodies busy clearing space for different kinds of living. How can one resist the metrics of capitalist appropriation and control? Intensely aware of what subdues people into robotic routines of survival, Gurton-Wachter offers defiance: “I was worried about the authority one needs in order to smash an image and see if it holds another image inside,” she writes.

Bernadette Mayer’s writing crucially informs this work. Mayer often examines the strain of inequality and lack as it pertains to creative quests, showing how the desiring space of a writer’s psyche rubs against communal life. In a similar way, Gurton-Wachter intimates the importance of dreams, writing prompts, and networks of people. Tapping into the heart of a struggle to think freely and live differently, the legacy of women artists nourishes this writer. “Every word is a nipple to me,” she affirms. The collection opens with a hypnotic spell—a short poem dedicated to filmmaker Peggy Ahwesh—followed by four long prose poems separated by interludes. This structure underlines suspension; as the interlude presupposes an intermission (a break), so does the book function as an appendage to a larger public context. The second poem of the collection, for instance, draws its title (“Mother of All”) from the Trump administration’s dropping of the GBU-43/B Massive Ordnance Air Blast Bomb in Afghanistan, and the executive of “A Development Proposal for the Center of the Earth” grimly announces how a state of perpetual war renders war invisible.

These poems release caged ideas from temporal bondage into the slack lucidity of the imaginary, where “a dream is a dilation in conversation.” Human and nonhuman worlds come near enough to feel each other’s breaths, as the poet describes sinking “into the ground and thrust like a diver into the form of a worm.” Yet, this transformation emerges from women’s work:

I am ready to receive the news through Hannah Wiener’s nipple.
I listen for the thread.

Hannah Wiener’s tit is in my mouth

Gurton-Wachter’s stunning lines ring as elastic rhythms, building compressed prose paragraphs that serve well the conceptual core of this book: a message urging each of us to heed collective dreaming and collaborative thinking. This unforgettable collection achieves a recursive complexity that invites multiple, ever more layered readings.