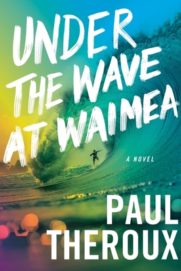 For readers seeking merely a tropical island paradise ripe with Aloha spirit, renowned novelist and travel writer Paul Theroux presents much more than they might expect, bringing to light what many haoles might prefer never to know, witness, or experience. Following up two recent collections of essays, Fresh Air Fiend and Figures in a Landscape, Theroux brings a different set of writing powers to bear in Under the Wave at Waimea, a fictional examination of his part-time home of Hawaii.

Echoes of Theroux’s essays, which serve as ports of both arrival and departure, offering a local’s direct experience of Hawaii and the Pacific, appear in his new novel. In Fresh Air Fiend, for example, Theroux mentions “a pueo, a Hawaiian owl, which is a subspecies of the short-eared owl”; in Under the Wave at Waimea the same owl reappears as a sign of “good luck.” In both his essays and his fiction, Theroux deftly clarifies the various microclimates of Oahu and elucidates that the Hawaii locals inhabit remains apart from the one experienced by most tourists. It’s thus a pleasure to have Joe Sharkey, Theroux’s surfer protagonist, visit many of the same locales and often express the same points of view that readers have seen in the essays.

Theroux describes Sharkey, a now-retired competitive big-wave surfer, in a thorough backstory where he, like Theroux, remains a bit of an outsider in Hawaii. Sharkey is a survivor under adverse circumstances, remarkably thriving like the flora and fauna of Christmas Island, Hawaii’s nearest island neighbor in the Pacific, which has survived over twenty-five hydrogen bomb tests. In both his fiction and nonfiction Theroux observes the detritus of the U.S. military and comments on the destructive actions of the British and American empires. Decaying World War II equipment abandoned by the U.S. military litters the island, and both Theroux and Sharkey comment on the environmental damage and criticize the empire builders.

In this book readers may also learn much about contemporary Hawaiian culture, which includes remnants of the Indigenous Polynesian culture alongside the myriad groups which have followed: British and Anglo-American missionaries and capitalists, Japanese, Chinese, and Portuguese emigrants, and the American military, all of which have left their footprints on the Hawaiian archipelago. At times, Sharkey expresses exasperation with the contemporary changes to his island home, bemoaning how Hawaii’s native culture has become overwhelmed and subsumed by 20th- and 21st-century tourism and consumer culture. Fortunately, Theroux’s prose in Under the Wave at Waimea eschews the tone of the essayist demonstrating erudition, and instead tells a story—one that may seem simple, but that remains a complicated tale of both age and fate.

Under the Wave at Waimea begins with an unfortunate accident which results in the death of an unknown, houseless man, a man riding the wrong way on a dark road in a rainstorm while under the influence. Sharkey, too, though less obviously, is under the influence when the accident occurs, but with his fame he sidesteps the negative legal repercussions from the accident. After the accident, however, his life begins to spiral downward into a serious funk—he suffers under a “curse,” it appears, and begins losing vitality and youthfulness. Olive, Sharkey’s girlfriend, challenges him with a sort of face-the-music temperament, which grates at times. But Olive also serves as a spur, and her voice seems not unlike Theroux’s hectoring voice in some of his travel essays. She, as an English nurse, remains an outsider too, like both Sharkey and Theroux. The author presents her well, though he delineates Joe Sharkey more fully.

Shortly after this opening, Theroux moves to the long journey through Sharkey’s backstory, beginning with his early years as the son of a U.S. military hero. Sharkey is kicked out of the prestigious Punahou School for partaking in the ubiquitous pakololo, landing in the public Roosevelt High School where his outsider status helps fuel unrelenting taunts. The descriptions of Sharkey’s youth reveal one of the strengths of Under the Wave at Waimea: a vividly rendered cast of minor characters, including Sharkey’s high school tormentors. These characters, who hold resentments toward haoles, also inspire young Sharkey, as an adolescent, to find solace on the waves. Theroux’s novel is rife with Hawaiian language and slang, successfully fleshing out the characters and society; Theroux, with his linguistic gifts, never sounds false or gratuitous.

As Sharkey’s backstory nears completeness, he remains the heart of the novel, and his journey elucidates not only the culture of Hawaii and of surfing, but also the dichotomy between Polynesian and Anglo-American cultures. Theroux presents criticism of American culture in extended glimpses, while the novel also brings to light a bitter view of the displaced and the left behind, as Olive and Sharkey search for the identity of the man who died. “Kapu,” a community of people without housing, paint on a sign at the entrance to their camp: “Go away!”

Sharkey may appear immature to some readers, and Olive even calls him a “misanthrope” as he continues to reject American culture and values. When Hunter S. Thompson makes an extended cameo in the book, however, he appears even more immature than Sharkey; he acts childish and needy and is addled by health and drug issues, though he holds to his penchant for firearms. He serves as a friend to Sharkey, an admirer of his surfing prowess whose books Sharkey has never read. Like Thompson, Sharkey expresses apprehension with the society within which he resides yet remains apart from, and for both Theroux and for Sharkey, it appears American culture has gone awry.

Theroux, in his eighth decade, remains most eloquent and most subtle in those small moments when he describes the bewitching natural beauty of his adopted home:

The rain had stopped; the land had swelled with sunlight, alive now, limpid, dripping in the soft, late-afternoon glow, a fattening rainbow arched in the cloudless sky over Hale’iwa, its luminous stripes textured like tissue, or threadbare cloth spun across the town. Olive was at the wheel, Sharkey fixed in one of his silences, as they drove along the soaked and blackened bypass road, the big trees sparkling, their boughs still wet, the tall grass sodden, glistening from the purification of the downpour, the day washed clean.

Yet it appears to some that Theroux pulls off the overall journey of Under the Wave at Waimea as well, just as a surfer might emerge from a tube into clear daylight on the shore. Slipping out from under the wave brings a moment of clarity, exhilaration, and triumph for the surfer, perhaps even relief and awe to the observer too. Though some might find the conclusion too neatly wrapped up, the character growth too perfectly tied in, this emergence melds with Sharkey’s character, as the story’s surfer hero finds a modicum of healing near the close. Sharkey's greatest rides are unobserved, but not all readers will accept or be convinced by Theroux's late turns. Nevertheless, the ride is surely remarkable.