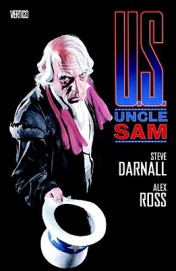 American politics, that cynical funhouse hall of mirrors, finds twin reflections in two recent comics works: Steve Darnell and Alex Ross's Uncle Sam and Scott McCloud's The New Adventures of Abraham Lincoln. These two works explore the intersection between reality and symbol, history and hero-worship—fitting subjects for a medium whose frequent subject is the secret identity split between ordinary life and the larger-than-life. Darnell and Ross take us on a journey of historical self-discovery, while McCloud tours the roots of our national forgetfulness. A side-by-side reading of the two shows how different creators can approach the same themes, even employ similar turns of plot, yet arrive at entirely different (though not incompatible) conclusions.

Darnell and Ross's main character is a tall, white-haired, goateed man, dressed in a tattered but still recognizable red, white, and blue outfit. Sam has lost his memory and perhaps his mind. Through the course of Uncle Sam, he wanders a modern American city, slipping into memories of other times and places—from the death of Black Hawk in 1832 Illinois to a Prisoner of War camp in Civil War Georgia to the Great Plains dust bowl of the 1930s. He mutters disjointed phrases ("It's a respectable Republican cloth coat"; "Have you no sense of decency, sir, at long last?"; "This generation has a rendezvous with destiny"), sound-bites culled from the history of the United States. He falls deeper into madness, further into memory, rediscovering much of his (and our) lost history, recovering many suppressed memories. Alex Ross's richly detailed art brings a sense of clarity to even the wildest of the story's events and steadies even the most jarring juxtapositions of Darnell's text. Ross captures a character in every expression and evokes a sense of place in nearly every panel.

Even though its main character is a walking symbol, Uncle Sam is at its most effective when retrieving bits of lost history or considering the contemporary political scene. When Uncle Sam is confronted by several other national symbols, however, the comic loses steam. The advice that figures such as Britannia and the Russian Bear offer is less substantial and far less gripping than the historically grounded figures Sam meets.

In the end, he stands up to a doppelganger Uncle Sam, a slick, self-satisfied version of himself, and succeeds in reclaiming a sense of purpose as well as a sense of his past. But the real crux of the graphic novel comes somewhat earlier: Sam relives Shay's rebellion, remembering how he and other Massachusetts militiamen fired on a crowd of Revolutionary War veterans and farmers protesting high taxes and severe treatment of debtors. "This was the real shot heard round the world," he thinks. This 1786 episode isn't much remembered anymore, but Darnell and Ross's whole point is to look beyond the easy, familiar answers for more telling, if disconcerting, truths. 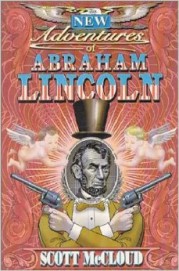 Darnell and Ross aren't the only comic creators to plumb the national psyche with a story about an American icon paired off against his own double; Scott McCloud is up to something quite similar in The New Adventures of Abraham Lincoln. In McCloud's story, school-age Byron Johnson meets an ersatz Lincoln who spouts historical inaccuracies like: "Where would we be if the pilgrims didn't care about American history?" and "'To err is human . . . to forgive divine,' as President Benjamin Franklin said." While this Lincoln heads to Washington to resume the presidency, another, more historically accurate Lincoln appears in Byron's living room.

The story that unfolds from there is straightforward enough, with a few twists at the end, but in The New Adventures, direct does not necessarily mean simple. McCloud, after all, wrote the book on comics theory and technique, literally: his landmark Understanding Comics analyzes the inner workings of comics, looking at things like timing, emotion, abstraction, color, panel-to-panel transitions. He shows an assured and subtle mastery of all this in The New Adventures, his first book since. The storytelling flows smoothly, aided by a sure sense of character blocking, well-composed panel juxtapositions and transitions, and dynamic page layout. McCloud also ventures into areas he did not cover in Understanding Comics, extensively incorporating computers to his artistic technique. There are moments when the computer-produced images seem a little too smooth, too clean-edged to mesh with the hand-drawn rendering style of the characters, but these moments are few. Generally, McCloud succeeds in fusing the cartoony abstraction of his characters with the slightly-too-perfect-to-be-real abstraction of the props and backgrounds. In the end, abstraction is at the heart of McCloud's message. As his more authentic Lincoln puts it:

Symbols, America, can be useful tools. But beware of those who would have you used by them! Some of their symbols are pictures, some are familiar phrases, some mere gestures. They are all designed to steal your hearts, America, but care little for your minds. It is your duty to assign both organs to attend them!

Cartoonists are in a unique position to analyze and advise us on the way we have used and misused our national symbols. This has always been the home turf for comics, as the nineteenth century Thomas Nast cartoons on the endpapers of Uncle Sam remind us. Darnell, Ross and McCloud all uphold that tradition, examining the icons our national subconscious creates, unriddling the language of the dream we call history.