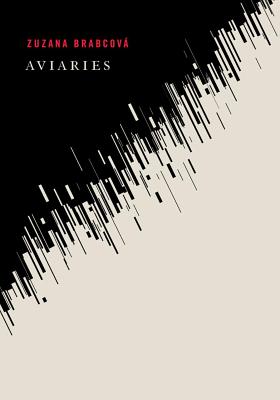 Composed like a twenty-first century flashback to Nikolai Gogol’s “Diary of a Madman,” Zuzana Brabcová’s excellent, final novel Aviaries is a surrealist collage of memories, anxieties, and fantasies. Loosely episodic, Aviaries follows the daily journals of a mother fading into obscurity: although full of unconditional love for both her daughter and aged mother, she feels too far removed from both generational poles to be an effective feminine force. She drifts through her past and through cut-up histories (both contemporary and long forgotten) in search of some kind of resonance amidst all the meaninglessness around her.

Brabcová’s prose rests comfortably, strangely, in between, caught somewhere in the middle of past and present, fantasy and reality, literature and poetry. Lines from psalms by Czech poet Ivan Diviš are scattered throughout the book, seamlessly integrated between blurry dream sequences. Aviaries repeatedly spirals out in madcap surreality, all while humming with a real-life relatable humility. In one scene, the narrator visits her psychiatrist, Dr. Gnuj (“Jung” in reverse), and while it’s easy to get unglued amidst the novel’s trippy waiting-room antics featuring talking masks and a lounge piano, the fantasies melt away as the narrator learns she could collect disability benefits on account of her being unfit to work.

Seemingly non-sequitur vignettes are riddled throughout Aviaries; as jarring as they are memorable, they expand the book’s themes of interstitiality. In one, Brabcová recounts a “fatal printing error” in which “Gennady Musatov’s illustrations to Dostoevsky’s The Brothers Karamazov went astray and ended up in the Czech edition of In Search of Lost Time.” In a later diary entry, the narrator explains “while the contours of some memories were preserved and stayed intact, others collapsed and blended together.” In a digression about Rorschach tests, “even memory is just a play of colors and shapes behind eyelids shut in a desire for non-existence.” These moments transform the novel into something larger than simply an experimental work about memory and surrealism; Brabcová circles around a metaphysical, inescapable transition, when a person’s presence and influence dissipates into another’s remembrance.

The relationship between the narrator and her daughter, a dumpster-diving punk named Alice, provides some clues. In another drifting memory, “this was an image of you, Alice,” she recalls. “You’re already dissolving, receding, changing, thinning, waning into the distance, and yet it’s as if someone has burned the image into the back of my brain.” By the end of the novel, she finds a way to untangle Jung: Brabcová includes a passage directly from the psychoanalyst, which details his understanding of the female archetype and her spirit (which he calls the “Kore”):

The psyche pre-existent to consciousness (e.g., in a child) participates in the maternal pysche on the one hand, while on the other it reaches across to the daughter psyche. We could therefore say that every mother contains her daughter in herself and every daughter her mother, and that every woman extends backwards into her mother and forwards into her daughter.

The fractured, psychologically prismatic Aviaries could be considered a diagram of a mother’s brain. Despite its nightmarish hallucinations, talking animals, hidden traumas, and journal entries with dates like “the Fifty-first of Marchember, 2851,” Aviaries, above all, is about motherhood in flux. Brabcová hides a devastating layer at the novel’s core about mothers continuing to live through the lives of their daughters, and shows the struggle of one mother coming to realize the increasing importance of her memories and the woman she was, and how these past moments may overshadow any further potential left in her life.

Aviaries begins in the days after the death in 2011 of the political dissident, playwright, and first post-communist Czech President Václav Havel. Soon after Havel’s passing, the novel’s narrator Běta, opens up a comments stream under an online article about him and finds the post, “Hope he’s rotting in hell.” She reflects, “In the murk of scum, in the silent and holy night, revulsion stirred.”

Havel’s loss sets the stage for this bewildering book. If Havel represents the triumph of good over evil, hope for a better future, and humanism winning out against totalitarianism, his death symbolizes the vanishing belief in the promise of a euphoric post-totalitarian era. More than that, Havel’s death seems to have awoken powerful social forces made up of people who never believed in the causes he represented. In Aviaries, the crashing down of this grandest of national myths splinters into a fragmentary narrative amid a surreal and bleak urban landscape—one that feels horrifying true. Post-Havel Prague, in Brabcová’s vivid imagination, is a world of fetishistic materialism, neoliberal social disaster, sickness, and death. An uneasy refrain echoes through the book’s pages, setting the novel’s mood: “Something is happening. Something’s in the air. Something isn’t right.”

Aviaries is structured as a collection of textual fragments written or curated by Běta, a woman in her mid-fifties. Běta has been out of work for over a year when the novel opens. Her daughter Alice has left Prague for the south of Spain, where she has embraced an anti-materialist lifestyle and the practice of dumpster diving. In addition to being poor, Běta also suffers from mental illness, and parts of the narrative flow through her visits to the psychiatrist Doctor Gnuj. Together, the breakdowns of her family structure and health push Běta to the social margins, isolating her socially and economically. This alienation sharpens her ability to observe the details of everyday life among other specters of the metropolitan periphery—the poor, the homeless, the addicts, the chronically insane. The process of untethering from the “normal” opens up Běta to a kind of truer vision of the world, despite the vision’s temporally chaotic, fantastical quality. This irony—the imaginative and surreal as truer than the real—is reflected in an interaction between Běta and Doctor Gnuj, when the psychiatrist tells her: “Your inner world is like that basement lair of yours. Kick down the doors, file through the bars! Do you even notice the world around you?” Běta responds, “I do. Don’t you worry. I know well enough what the world around me lives for: the season of wine tastings and exhibitions of corpses.”

Two relationship triads provide a modicum of structure to the book. The first and most significant triad is that between Běta, her aged mother, and her errant daughter Alice. More than any other element, this generational dynamic creates a temporal rhythm in Aviaries, blending past and present, gesturing toward the future: “One minute Alice is bouncing around in the blueberries, she’s two years old, the next she’s barely hobbling along, an old woman she is yet to become.” Or this startling line, after Běta witnesses a girl wearing a Microsoft T-shirt, a junkie, “writhing and undulating” against the “piss-soaked wall” of a bus stop, “long past due for the morgue.” Běta tells her daughter, “In another time and place this was an image of you, Alice. You’re already dissolving, receding, changing, thinning, waning into the distance.” Brabcová deploys the figure of the snake, with its Jungian overtones of both creativity/fertility and destruction/death/danger, to hold this triad in a quivering relational field:

I’m coming back home, down the hallway by the basement stalls. . . . Above my head, the lights turn on automatically, one by one. I suddenly spot a snake edging toward me across the concrete floor. It goes still. I go still. It raises its head, flat and speckled. We watch each other warily, a barely audible hiss from the light bulbs.

The second relational triad connects Běta with the homeless lunatic Melda and to the girl in the Microsoft T-shirt, who eventually comes to squat in the “ruin” across the street from her apartment. Melda seems to be Běta’s playful double. With Melda, Běta slips into a parallel mode of existence in which mundane scenes of poverty and degradation transform into a realm unbound by the straightjacket of realism. A trip to the supermarket, for example, ends with the following: “But the Harpies at the checkout counters, half-women and half-bird, those goddesses of storm winds, let us pass through without a fuss, as though we were two transparent fly wings passing them, the crackling wing-cases of nothingness.” If the symbol of the generational triad is the snake, that of the lunatic triad is the caged bird; after Melda’s disappearance from the basement, Běta runs into him while in IKEA with her sister, and finds him “completely plastered with black feathers like a raven puppet.” She asks where he lives now:

He stayed silent for an unusually long time. . . .
“It’s a secret, but I’ll tell you . . . Every day I wait here till nine when IKEA closes. Then I hide in one of the storage spaces in the bedroom department, and I come out when the coast is clear and it’s all empty and quiet. At night I wander around a quiet IKEA that belongs to me alone.”

The bleaker version of Melda’s absurd capitalistic aviary is the cage of the girl with the Microsoft T-shirt. She has come to occupy the dilapidated building across the street, and appears in the space just as Melda vanishes—Melda’s creative lunacy morphing into a dismal, hopeless, self-destructive madness. Běta describes the scene when she offers the girl a bread roll: “She snatched it out of my hand and bit into it greedily. I looked around: no guts, no lungs, no liver—just a layer of plaster on a cement floor, just boarded-up windows, just a layer of plaster on the girl’s sores, just her eyes boarded up.”

Aviaries is an unsettling, provocative novel that gets richer with each successive reading—and it demands and inspires multiple readings. Tereza Novická’s translation sparkles, moving fluidly across Brabcová’s intricate assemblage, and the novel’s haunting refrain seems perfect, a mantra for our age: “Something is happening. Something’s in the air. Something isn’t right.”