Founded in 1982 in Kolkata (Calcutta), India, Seagull Books publishes work in English by authors from around the world, specializing in African, French, German, Swiss, and Italian writers in particular. They also offer a rich selection of writings from Middle Eastern authors in diaspora who have emigrated to Europe, usually under threat of imprisonment or worse. While senior editorial credits go to the Seagull staff in India, the books themselves are translated by exceptional scholars from around the world, then are printed and bound in the United States. The enchanting artwork of the dust jackets, often created by students at the Seagull School of Publishing in India, makes their books even more distinctive. While the dust jackets of the two books covered in this review are perhaps less riveting than most, their muted and quiet design lend themselves perfectly to the direct and unadorned poems of the respective poets within.

Michael Kruger and Rainer Brambach are both German-speaking poets, and though born a generation apart, and in temperament and upbringing utterly dissimilar, they still share a sensibility toward their craft that is remarkably concise, unadorned, and bitingly candid. Several of their poems are so similar in tone and brevity, were they to quietly get legs and take a seat in the other’s book, most English-speaking readers would never notice the sleight. 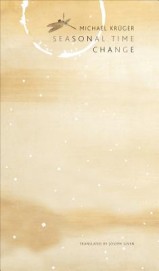 Kruger, born in Wittgendorf, Saxony during World War II of middle-class parents, grew up in Berlin—first under allied bombing, then during partition as post-war Germany split in two. Kruger has been a regular on the German literary and publishing scene in Munich since the 1960s. Now retired, his distinguished career as chief literary scion at Carl Hanser Verlag and as editor of the literary magazine Akzente place him at the heart of modern German letters. He has written extensively, and been interviewed often, on a topic dear to him: the prospects of publishing in the digital age. He is vociferous in championing German publishing in all formats.

Seasonal Time Change: Selected Poems, Kruger’s latest book to be translated and published in English, presents almost exclusively short poems in which the beauty and iniquities of nature often mirror the unvarnished ironies of human endeavor, and is an accessible, excellent introduction to Kruger’s poetry for an American readership. Most poems in Seasonal Time Change are well under a page, precise in image, deft, witty, and wryly jaundiced in their view of the poet’s world caught between a desultory urban idyll and nature’s unsentimental image. Take these lines from the opening poem “My Desk in Allmanshausen”:

In the house beside mine, just up the hill,
lived Mussolini’s foreign minister
before he was captured and taken to Italy and
hanged.
And further on was Hilter’s favourite poet,
Hanns Johst, whose words were obviously
inspired here.
I look at cows, squirrels and horses;
at the open window I hear the distant Autobahn.
No one’s forcing anyone
To accuse humanity of doing good.

We can only marvel at Kruger’s sly inversion of the trope of humanity’s goodness with the shadow of Hitler and Mussolini up the road as mnemonics to humanity’s horror. As if in response to his own quiet reflections of such a past, Kruger echoes the theme in his poem “Twilight:” “Farewell lurks in every footprint. / You have to get in line, / into the queue of pebbles at the lakeside, / for the sake of a higher justice.” 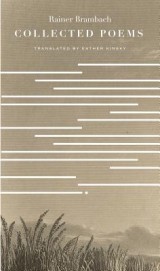 By contrast, Brambach, born of a poor piano tuner and a mother who took in washing, lived most of his life as a recluse, working as a gardener and day laborer. He had little to no formal schooling and though he actively shunned literary recognition throughout his career, he was still well read and invariably curious about the literary trends of the day. Born in 1917 in greater Basel on the German side of the Upper Rhine, he was horrified as a teenager in the 1930s by the rise of Nazism. Barely a month after his conscription into the Wehrmacht in 1939, he fled Germany, crossing the Rhine by footbridge to surrender himself as a prisoner of conscience. He spent the war in internment and when released at war’s end, Brambach made Switzerland his adopted home, living outside Basel until his death in 1983.

Brambach’s published output is modest; only two bound volumes of poetry in his native tongue are in the library catalog. Timely then that this Collected Poems comes to us as the first volume in translation to fully present this worthy poet to an English-speaking audience. While largely forgotten on the international scene today, in Switzerland Brambach remains an important literary figure much admired for his often melancholic, always insightful little poems that present the bucolic landscapes of his adopted country in disquieting light. Concise they may be, but they leave room on the page for the mind to linger in contemplation. Here is “Dog Days” in its entirety:

Slowly the wells are running dry
The stray dogs are looking for water
The spice seller is nodding off in his shop vault
Nobody is buying pepper
Outside the knife grinder’s leisurely turning his wheel
He chases the dogs away without a sound
He observes the seller
He waits
This is the time of sharpened blades.

Brambach’s keen eye for the simple image, as here, often betrays an unease with the world that can seem at times to perch motionless like a bird of prey on the still point of his poems, only to fall with talons upon the unwary reader. Here it is, a lazy late summer day, a knife grinder at leisure, stone wheel turning . . . still he waits in this disturbing “time of sharpened blades.” We might ask the obvious: Waits for what? In “Caution Should Be Called For” Brambach posits another profound question: “What pushes you to write poetry? . . . the ravens will come back—black preachers / without oil in their voices.” One gets immediately the uneasy melancholia of his life’s work.

Both poets, it could be argued, share a recognition that each in his separate birth year came into a world at war; a realization, too, that their homeland putatively and literally started both conflagrations. Throughout, it is as if each in his inimitable way deals with this dark heritage by coming to his poetry with guilt by association, attempting to make amends in their small poems for a world gone astray. “Unfaithful letters,” says Kruger in the poem “Nights on the Terrace:” “cannot distinguish / between Heaven and Earth. / You can still hear the world / above the closed books.” These tomes may well be those of Germany’s own garrulous history weighing heavily, such that he, like Brambach, seems determined to write a new world into existence above the closed sheaves of the past. Perhaps in agreement, Brambach’s last untitled poem of the collection states: “Never put to paper and yet unforgotten . . . our childhood years, they won’t come back.”

Much of the praise for these fine books in English must go to Brambach’s translator Esther Kinsky and Kruger’s translator Joseph Given; they have captured in a foreign tongue the native German with poise and precision. Seagull Books, too, is to be commended for its fine command of book-making, design, and for its perspicacity in publishing worthy world authors to a largely new English-speaking audience.