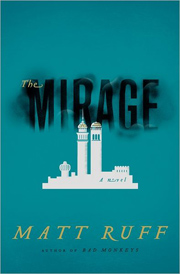 November 9, 2001. Sunrise in Baghdad is at 6:25, and as the first rays strike the Tigris and Euphrates twin towers, an old man stands in the main dining room of the Windows on the World restaurant, gazing out at the city.

And so, with the aplomb of a diving 767, Matt Ruff introduces the premise of his new novel, The Mirage. In this politically charged alternate history, the United Arab States are locked into a global war against radical Christian terrorism. Nine years after the November 9th attacks, an Arab occupation of the Eastern seaboard has become a quagmire, with mounting casualties and no end in sight.

To explore this topsy-turvy world, the novel takes the mode of an espionage thriller. It moves as quickly as anything by Tom Clancy, shoving its team of Arab Homeland Security agents into a violent hostage situation from the starting gun. There’s Mustafa, the dutiful protagonist haunted by the death of his wife on 11/9, sardonic and secretive partner Amir, and feminist rookie agent Amal. If you’ve ever read a book you bought off an airport rack, then you can guess how this will go—each cop carries a dark, compromising secret that will come to light at a critical moment. Yet there’s far more fun to be had here in exploring the book’s looking-glass world.

The agents are brought in to investigate strange chatter in the ranks of the terrorist “Crusaders”: rumors of another world, one in which America is the real superpower and the Arab countries nothing but petro-dictatorships. The Christian terrorists believe that, if they kill enough Muslims with their suicide bombs, the veil that conceals this true world will be lifted and the righteous will ascend.

The novel’s satiric elements range from right on target to patently surreal. For instance, it’s surprising how familiar the names of Iraqi cities and Baghdad neighborhoods are to the average, news-reading American. It takes time for the sick joke to sink in, to remember exactly why we know names like Fallujah and Sadr City by heart.

But for every cutting jab, like the way Mustafa and Samir always confuse the dizzying variety of warring American Christian sects (Baptists, Pentecostals, Mormons, Episcopalians . . .), there’s a gratuitous clunker, like the fact that all the American militants sport Revolutionary era tri-cornered hats (something familiar, like baseball caps, would have been more appropriate and unsettling).

The greatest feeling of whizz-bang invention comes when, as the novel plummets through plot, we meet twisted versions of famous figures: Senator Osama bin Laden, Governor Muammar al Gaddafi, and—the book’s MVP—a charmingly roguish Saddam Hussein, who enlivens the proceedings immensely as a Gotti-esque mobster, bringing unpredictable charm to every scene he’s in. Meanwhile bin Laden is a drag as the antagonist—a bummer in any dimension.

The alternate history genre typically explores what-ifs, worlds in which Lee won at Gettysburg or Caesar Augustus discovered gunpowder. The parallel world of The Mirage has no such turning point, which is keen on Ruff’s part. It highlights the way that so many of the things we take as givens—like enmity between Jews and Muslims, or the primacy of the USA—are not fixed, but nor are they historical accidents. Ruff argues that the choices and efforts of individuals, working to reshapethe world in their own image, can raise up empires as great as the Chaldeans under Nebuchadnezzar and can grind nations down until they are as marginalized and desolate as the Iraq that American troops are now leaving behind.

Subtlety isn’t one of this book’s strengths, but it doesn’t need to be. There is a huge hole in American letters that hangs over Mesopotamia. We desperately need novels that dare to broach the subject of our collective guilt over the invasion and occupation of Iraq, the horrific loss of Iraqi and American life. And this is exactly what Ruff, in his unconventional way, is doing here. The novel may verge on absurdistsatire, but it holds a beating heart. Mustafa and Samir may watch CSI: Damascus and use a Wikipedia-like website called “The Library of Alexandria,” but they also struggle to reconcile their Muslim faith with modernity and mourn the human costs of continual war.

Frequently throughout the novel, Mustafa is gripped by a growing sense of unease, the thought that his world is not right, that he is living in a collective delusion. The feeling grows stronger when the team reaches America, where he intuits the people’s longing for a greater destiny. But he must ignore the feeling, and do his best to struggle through another day. Just as this novel is a satirical thought piece unsteadily piled on top of intensely readable thriller, Mustafa’s world isa crumbling tangle of delusion and illusion. And there is no escaping the indictment that we are doing something similar. We live our lives trying not to think about how our lifestyles impact the side of the world that we’d really rather ignore. The Mirage asserts that the aspirations of the Islamic world and those of the West will always collide. As one character muses, late in the novel, “Arabia in a state of nature, untouched by the dreams of the West. Now thatwould be an alternate reality . . .” 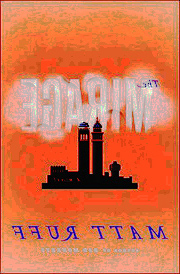 Matt Ruff may or may not be a science fiction writer. His 2003 novel Set This House in Orderwon the James Tiptree award, which honors gender-bending science fiction and fantasy, but the book is categorized variously as science fiction, mystery, and general fiction, depending who is doing the categorization. Ruff’s new novel,  The Mirage, is an alternate history of sorts, a reimagining of the world we currently live in, different enough from reality to count as science fiction but politically aware enough that it could equally be considered satire.

The Mirage is set in a country called the United Arab States, which stretches from Persia from Iraq to Libya. The UAS is at war with the Christian States of America, in consequence of a Christian attack on Baghdad that occurred on 11/9/2001. The novel explores this flipped world through three UAS Homeland Security agents who are busy tracking down Christian terrorists when they encounter a story about another world, one where America is the superpower. Some of the Christians believe that that is the real world, and the world around them is only a “mirage”—and this belief has attracted the interest of some influential people, including a UAS senator named Osama bin Laden and the union head/mob boss Saddam Hussein.

There is a lot of world-building to be done in a novel like this, and a great deal of information that needs to be conveyed to the reader. Ruff for the most part handles this challenge deftly, interspersing the chapters of his narrative with entries from the “Library of Alexandria,” his fictional world’s answer to Wikipedia. The Arabia he has created is pointedly parallel to the United States in its superpower swagger, its large-country divisiveness, and its layers of self-protective bureaucracy, but it’s also distinctly Arabian. Divisions between Sunni and Shia are still important, as are Egyptian and Iraqi and Persian cultural differences, and the characters have complex relationships to their culture’s attitudes toward homosexuality, polygamy, and temporary marriages. Some of the women characters keep their hair casually covered, while others scrupulously cover everything but their face and hands at all times.

Ruff seems to have the most fun when he’s playing Arabian culture and real-world American phenomena off of one another, as in one scene that takes place in a music store:

Mustafa found himself in an open aisle between two entertainment mediums and two warring sociopolitical viewpoints. To his left, in the DVD section, a bank of flat-screens showed the governor of Lebanon, in his previous career as an action-movie superstar, maneuvering a jump jet between the skyscrapers of Beirut and using the plane’s nose-cannon to annihilate an army of terrorists. . . . To his right, in pop music, a wall of speakers and subwoofers blasted out the punk band Green Desert’s anti-war, anti-Saud anthem, “Arabian Idiot.”

The book’s premise is also perfect for some sly social commentary, which Ruff accomplishes with remarkably little need for invention. In one scene, a character is watching an anti-Christian propaganda film that features a Sunday school class singing real hymns. When his Christian roommate walks in, he awkwardly explains that “he hadn’t been making fun of all Christians, just the fanatical, Jew-hating, American variety.”

With a scenario this engaging, the book could easily be made of exposition alone. There is a great deal of that, but there’s also a compelling plot that deepens as the characters’ stories are fleshed out. Over the course of the novel, the reader becomes as curious as the characters are to learn the truth about the “mirage,” and what started out as a CSI-style procedural becomes an investigation into political power—and just what it might mean for that power to change hands.