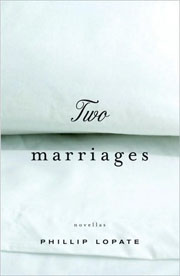 It’s typically a sign of desperation when writers, even critics, begin littering their work with deferential references to their influences. Susan Sontag dismissed this tendency—an occasional indulgence in her early pieces—as inflated didacticism. “My pedagogical impulse got in the way of my prose. All those lists, recommendations!” Nevertheless, the essayist’s relationship to the reader has a far more instructive flavor than, say, that of the novelist. Indeed, to assume this posture in fiction is to risk lecturing a story rather than telling it.

Phillip Lopate, a master of the contemporary essay, may be one exception. In his two novels, and now two subsequent novellas, the most genuine moments often involve some deft name-dropping: a tenuous lover’s rendezvous over Kenji Mizoguchi’s films, or a devastating dispute over the classical conductor Zubin Mehta and composer Pierre Boulez. The effect is calmly centrifugal; Lopate is the rickety but charming interborough bus leading us from the seed of his idea to the fruits of his cultural exploration, rather than vice versa.

One is tempted to link this distinctive style not only to Lopate’s day job as an editor and writing professor, but to his long bachelorhood. Alienated admiration, of women just as often as of film or literature, is his most fecund subject; he finds eloquence between passion and detachment. Since marrying in the ’90s, however, he has been on his best behavior, mostly publishing anthologies that emphasize his curiosity for cultural bridges rather than sexual ones. But the novellas in Two Marriages show that the “inescapable ego” of the essayist makes eternal islands (bachelors) of us all. There’s a dashing intellectual promiscuity in Lopate’s best work that he has not surrendered entirely to matrimony.

It is fitting, then, that both novellas in Two Marriages concern a spontaneous overflow of betrayal, recollected—and confessed—in tranquility. Lopate uses perfidy as an excuse to explore the “universal hetero-male problem”: viewing our lovers from across the sex crevasse, we become infatuated with the distance rather than the destination. This central theme is also readily understood as a surreptitious conversation about criticism. Just as we create, and become obsessed with, methods and systems for organizing film genres or schools of poetics, we impose upon unthinkable events and deeds the same ultimately futile theoretical structures. And why not? Human behavior can be just as prone to dusty archetype as a Dreyer film.

Of course, it’s one thing to comment on a movie as a spectator (a role we have no option but to assume) and quite another to withdraw analytically from one’s own romantic meltdown. And, granted, the “Woman as Other” theme is no innovative twist. To exacerbate matters, both of the couples in Two Marriages teeter on the precipice of stereotype: jaundiced, domineering husbands with wives who furtively exercise the seductive, cognitive strength of puissance that by now seems the birthright of fictional femininity. But Lopate eschews the pedestrian by setting his stories after the heat of the moment, in the flaccid rationalizations that follow cuckolding and in the slow return to the drudgery of household discourse.

These scenarios are spun for humor in “The Stoic’s Marriage,” the first of the two novellas. This work is a bolder mirror image of Lopate’s first novel, Confessions of Summer: both are sustained first-person monologues of disaster, both are moody and esoteric, and both deteriorate in a fugue of an anticlimax. Gordon, the narrator and titular stoic, is nearly a hyperbolic version of Lopate’s on-page persona: a wealthy, bookish, middle-aged sesquipedalian lacking modern social skills. He catalogs via Moleskin diary the story of his hasty marriage to a seemingly nubile Filipino woman named Rita, whom he meets as she cares for his dear mother on her deathbed. This is domestic mismatch as Rabelaisian satire; it’s not enough that man can never “know” woman, but Lopate presents us with characters that quite literally do not know each other (a third-world trophy bride and an overgrown, under-sexed, perpetual graduate student). The narrator attempts to justify his rashness in love with poetic sophisms, hilariously dissecting his wife’s body, or at least attempting to, in page after page. “She lifts her head like a doe, and as you approach her, you see one eye, not both. I am speaking metaphorically, of course . . . . I don’t know how to explain it any better, forgive me.”

Gordon’s determination to follow the philosopher Epictetus’s example molds him into a sublime foil for the bubble of activity he is thrust into. Rita’s betrayal, which is a convoluted series of unfortunate circumstances rather than a single cataclysmic event, forms a stoic fantasy; the more ludicrously brutal the situation becomes, the more opportunities the protagonist has to react calmly and recite Seneca. When faced with the annoyance of celibacy, the desire for sex is marginalized with logical subterfuge: “It is not that sex is overrated, but that its pleasures are inherently the same thing over and over . . . . It is not even necessary to masturbate.” This is a funnier interpretation of the thinking man’s sexual sour grapes than even White and Thurber’s.

Through Gordon we also see Lopate in rare form, participating in clear Jewish comic traditions. Although Gordon himself is not Jewish (he makes vague boasts of his Spanish heritage), his situation recalls the story of Job—a story that, when viewed aerially, is one of the most hilariously acerbic Jewish satires ever written, and quite possibly the prototype for all humor of the pathetic. Gordon is an even better clown than Job because he phrases all of his lamentations as failed stoic aphorisms laced with melodramatic pathos (a choice example: “I realize that Rita probably doesn’t love me as much as I love her, but it doesn’t matter . . . The fact that I love her more than she does me is justified, because I’m not as lovable as she is.”). And because Gordon is the victim of Woman rather than God, we find his plight both identifiable and deserved (the nimble gift of the best clowns). Gordon, like Job, admits defeat before a higher authority—performing a graceful vaudevillian tumble while he’s at it.

The second marriage/novella, “Eleanor,” changes pace to the free-indirect discourse style of The Rug Merchant (the two marriages are thus neatly “buddied” with Lopate’s prior fictive output). A single weekend in the upper-class lives of middle-aged Frank and his second wife, Eleanor, is recounted through multiple and occasionally colorful points of view. We’re fed a series of lively if somewhat perfunctory vignettes around the household: people answer phones, visit zoos, become jealous, escape to bedrooms to make sexual advances, chide one another, make love, and seem pleasantly ignorant of their decadent insularity. The highlight of this slight farce is a dinner party featuring a locally famous actor and several old friends; Lopate keeps his omniscient narration at a Renoirian wide angle throughout while various voices and scenes bleed through it. But perhaps because of the broadening of vocal diversity and the simultaneous whittling of temporal scope (not to mention the sharp departure from the “Stoic’s” clownishness), the second marriage feels less successful.

Lopate also grapples here with the universal male problem he means to hunt down: standing on the divide’s other end, he fails to penetrate (or perhaps penetrates too much) the minds of his female characters in a manner that transcends typical gender projections. But then again, it’s this same bias that makes the confused-male-fantasia aspect of the marriage so credible. We delve headfirst into Frank’s (mis)understanding of his wife’s body: “he felt that peculiar secretion of hers, like an acid bath, gripping him gently, which always excited him.” Gender confusion is rooted in the genitals; the mystery of the female otherness, the yonic symbol, becomes corrosive. We eavesdrop on these fumbling interactions as Frank’s id pitifully misinterprets his lover’s signals: “It was hard to tell at this stage in their marriage where her appetites left off and his began.” It’s too soon after courtship for Eleanor to risk bruising Frank’s ego, so she allows herself to become a mirror for her husband’s lust.

This leads to the inevitable set piece of Eleanor’s admission of betrayal, and the loudest female cliché in Lopate’s oeuvre. “Sometimes I would sleep with a man and get the feeling that underneath he loathed me. Loathed my body, because it was a woman’s body.” Must all sexual misconceptions be rooted in misogyny, equated with male assault? We suspect in such passages that, underneath it all, our essayist is hopelessly glib; the problems of these husbands can be clumsily tagged as love vs. lust, selfishness vs. compassion, tribalism vs. modernity.

But with Lopate the accomplishment is not always in the structures he builds; it’s on the bridges that depart from them. Through allusive girders and beams in the text we glimpse the overspilling blueprints and roadmaps of the author’s own cultural-sexual obsessions. Roughly two-thirds into “Eleanor,” Frank plays his guests a 16 mm copy of City Lights through an old projector, and we’re treated to a laconic narration of the film’s final reel, climaxing with “the most heartbreaking close-up in film history.” As the scene fades, Frank mistily observes that the ending “gets” everyone who watches it, quite unaware of what he might learn from Chaplin. This recalls an anecdotal tangent in one of Lopate’s personal/film essays in which he describes watching Dreyer’s Ordet with a Catholic girlfriend; she scolds him for the double standard of refusing religion but allowing himself to be moved to tears by Judeo-Christian imagery on the screen. “You can take it in art, but you can’t take it in life!” she reprimands.

Lopate’s characters are like us; they want—they need—to solve problems by talking them out. But City Lights presents a perplexing alternative: when the female lead “sees” the chivalric Tramp for the first time, and he peers back into her, their interlocking visual epiphanies leap the chasm of gender confusion. This humanistic recognition from island to island is delectably ironic in Two Marriages, but it nearly sinks Lopate’s entire city at the same time. It’s never an endless intellectual exchange that soothes sexual alienation: it’s always the hackneyed melodrama of romantic tenderness. Which might be, in the end, the real problem. We can take it in art, but we can’t take it in life.