"I want to, but it's not certain I am writing this book. It is aleatory."
—Marguerite Duras

What happens to the unpublished work of a writer when she dies? Who is in control? Marguerite Duras died March 4, 1996, after publishing more than a hundred novels, stories, plays, and film scripts. Yet death has not stopped Duras from publishing. Writing, a collection of five late pieces only now translated into English, is not exactly a delineated treatise on the subject of writing, but it seems to be as close as Duras will ever come. In the initial piece, "Writing," Duras discusses the necessity for solitude and ties her writing to specific places where she was able to carve out the space she needed:

I had already discovered that what I had to do was write. I'd already gotten confirmation of this from Raymond Queneau. The only judgment Raymond Queneau ever pronounced was this sentence: "Don't do anything but write."

Duras followed this advice to the letter. In another piece, "The Death of the Young British Pilot," Duras recounts an incident that stayed with her throughout her life. W. J. Cliffe, a 20-year-old orphan, is shot down on the very last day of World War II. Unable at first to free him from the wreckage of his plane, the townspeople of Vauville stand vigil beneath the tree where the wreckage is trapped. When the body is finally freed, he is buried.

That is the beginning of the story.

Duras's brother, Paulo, is killed in Japan and tossed into a mass grave. He does not have a village to mourn him. He is the person Duras loved most in her life, and he lies in an unmarked grave. Brother and pilot are fused in her mind.

I cannot write about him anymore. And I'm writing, as you see, I'm writing none the less. It's because I'm writing that I don't know if it can be written about.

Duras ponders whether or not the collapse of the world might have begun on the day the small plane was shot from the sky over Vauville.

And then one day, there will be nothing left to write . . . 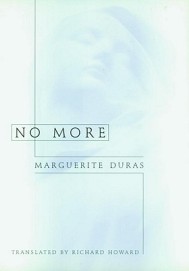 For Duras, nothing left to write is death. No More, also posthumously published, is Duras's last book—not so much a book as a last gasp of a writing life. As a reader who has admired Duras for years, I was intrigued at the thought of reading her last words and thoughts. But as the translator Richard Howard points out, "Who makes the book here—isn't there always someone else, someone not entirely to be trusted who will have to collect the disjecta verba, to straighten things out—." Wehave come to this book through the intercession of Duras's longtime companion, Yann Andréa Steiner. The book appears to be a diary of the last two years of Duras's life, but I knew, before Duras so freely admitted the fact, that I could not be certain she was writing this book. Often a particular day will consist of several observations which are broken by the insertion of time passages such as "later," "later still," "silence and then," as in this excerpt:

Find something more to write.

The effect of such interventions is like being forced to read to a metronome. Yet reading the scant entries, fierce and defiant and moving, I had no doubt that Duras was in there. No More is not a book of Duras's rage against the dying of the light, but rather of her spitting in its face. I wanted more. More of Duras, sans interlocuteur. This short book contains not only Duras's words, not only a note from her translator, but a foreword by the editor who first published excerpts of No More and an afterward that was merely a dissertation on the book. Between the translator reminding me that there were outside forces involved in the editing, and the editor assuring me that Duras had seen at least part of the manuscript in print, and the academic telling me what I had just read, I was queasy. If you are a fan of Duras, read Duras, re-read Duras. Read the rest later.

The last entry in No More, dated February 29, 1996, just days before she would die, reads:

I love you. Au revoir.

In Writing, Duras tells us, "Writing is trying to know beforehand what one would write if one wrote, which one never knows until afterward." I think of Duras at that moment when she wrote "au revoir" and laid down her pen for the last time. If one believes what Duras wrote, then, perhaps in the afterwards that followed the writing of "au revoir," Duras knew. Marguerite Duras was a writer and without the written word, she was, indeed, no more.

Click here to purchase Writing at your local independent bookstore

Click here to purchase No More at your local independent bookstore