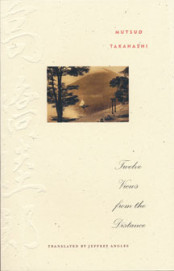 Just what is the nature of memory? It is at once tenuous and concrete, easily grasped yet often fleeting. Mutsuo Takahashi believes there are three different kinds of memories: those that are pure recollection, those that originate from the stories of others, and those that are a combination of the two. Throughout Twelve Views from the Distance, Takahashi explores his childhood and young adulthood by following the threads that connect his memories together. The twelve views are like twelve lenses—or, as Takahashi says, mirrors—each with a unique vantage referenced in the chapter title. One view is of snow, another the sea; still others are sexuality, his grandmother’s home, and his imagined father. Each of these views reveals facets of his lifetime and the lifetimes of his mother, father, grandmother, and grandfather. Facet by facet, the reader is immersed within the rich environs of southern Japan during World War II and the years thereafter.

Mutsuo Takahashi, a preeminent Japanese poet, grew up in rural Kyūshū, Japan’s southern island. He was born in 1937, just a few years before World War II commenced. Takahashi’s father, a steel worker, died of acute pneumonia when the author was an infant, and his mother was pressured into putting her infant son and young daughter into the care of her deceased husband’s relatives. Takahashi’s sister was raised in a different town by his aunt, and the boy’s childhood was spent partly in the care of his grandparents.

Each view in the novel is illuminated by numerous events plucked from the author’s memories with little regard for chronology. The exact timeline of what happened when in Takahashi’s life isn’t exactly clear—but it doesn’t need to be. More important are the events, large and small, and how they impact the lives of Takahashi, his relations, and their community. Japan’s war with China and subsequent involvement in World War II as portrayed through Takahashi’s childhood memories is felt not only in the loss of lives (his uncle’s included), but also in the presence of more barley than rice in the family’s evening meals. Rationed foods, the rise of nationalism, explosives in the harbor, and many other signifiers testify to the presence of governmental conflict in the lives of small-town Japanese citizens, and youthful Takahashi meanders through his life, passed from family member to family member, buffeted here and there by events beyond his control.

Twelve Views from the Distance does not hesitate to present uncomfortable subjects (violence, lust, death, adultery, greed) with as much honesty as moments of beauty, love, and charity. It is an elegant novel; the overarching imagery floats gently on the surface of Takahashi’s words, carried smoothly from memory to memory, shading the events of the author’s life and presenting avenues into the world of his childhood. Captured in his memories are the songs of schoolchildren, his grandmother’s versions of folktales, the quiet countryside of Kyūshū, and many other details of the time. For instance, shortly after comparing his mother to the sea that separated them for over a year, Takahashi writes, “the sea continued to rock beneath me, even after we reached Grandmother’s house. It was underneath the veranda where I sometimes walked and looked at picture books. It was under the path I took when I put on Mother’s clogs and went down to the general store to buy ramune. Even now, more than twenty years later, that sea continues to rock beneath the futon where I sleep and dream.”

Also of note, and not to be taken lightly, is Jeffrey Angles’s translation from the Japanese—every bit as elegant as Takahashi’s text. As he reveals in both his introduction and acknowledgement, this was a labor of love for Angles. He first met Takahashi in 1996, and began translating Views in 2006. Work on the translation was supported by grants from both the National Endowment for the Arts and the PEN American Center, which illustrates how critical grants of this kind are. As Angles points out succinctly: “Translation has the power to introduce new ideas, expressions, and concepts into a language or culture; it has the potential to reshape power and knowledge, thus changing the ways the world is understood.” In regards to conflict between nations, it is critical to build as many bridges as possible to facilitate greater understanding, even (or particularly) as many years after the fact as 2013 is from 1945.

Takahashi’s memoir presents not only the difficulties faced by citizens living through a war, but also the challenges of growing up in poverty, of being raised by a single mother who is forced to make ends meet in creative ways, and of exploring an alternative sexuality, among others. The novel presents twelve reflections on the time and place it depicts; some of the details are very specific, and many are universal. Throughout, Twelve Views from the Distance is unflinching, compassionate, and beautiful.