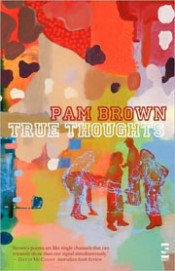 In Pam Brown’s latest release, True Thoughts, the role of daily life and the poet’s response to everyday movements are traced from poem to poem. While Brown finds herself confronted by all manner of gentle distraction, her wavering verse is an anti-agenda, a labyrinth of notes, thought collages, and passing statements, as exemplified in “No action”:

but there’s also
a vicarious
nothingness-is-commerce
in that soft-focus slickery
in the Hensons.
Calvin Klein ads
are overtly
to-be-expected—
gym & anorexia combo

On their own, such selections of Brown’s work form little more than a literary puzzle box, waiting to be tinkered with, and waiting for scratched chins. But through the injection of subtle exposés that splice and contract the murals of each poem, Brown’s work translates beyond the sheer crypticism of the ultra-personal journal.

These statements of poetics, life, and art move True Thoughts to cohesion. In an early poem of the book, “Death by droning,” Brown ironically writes: “droning on is not / my way, / mine’s more a kind of / devolution / or maybe, / simply, to make art / through spaces, / without notes to myself— / none—myself to myself).” Her notes often appear to be personal reassurances, affirmations that may have helped her create the poems, and that will help soothe the reader into understanding her means for connection.

At other times, Brown’s interjections form the basis for the arguments of her poems, as in the closing stanza of “Ultradian rhythm,” a poem that is a mixture of Objectivist word-play, fallings through the moralist rabbit-hole, and a poet’s nonchalance: “seems like Brisbane / summer grey / and I’ve come so very far / to make this small comparison.” Perhaps instances of dense philosophical insight and the demoralization of self-loathing are the only arguable shortfalls of Brown’s book; the attempt to break free from her own mind, though usually filled with soft humor, often contradicts the powerful imagery and sonic vorticism she can so easily call forth.

Regardless, Brown’s incandescent journalism succeeds in going universal, resulting in a well-rounded book about the conflict of philosophical ideas, the tickling of humorous experiences, the blunt acceptance of punk bands and the equally blunt rejection of political authority. The comfort of various interactions with writing is an idea that we can read repeatedly and enjoy profusely. As she writes in “In Europe”: