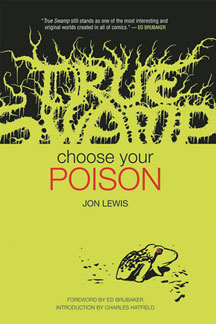 “I dreamed of a swamp the way the Romantics dreamed of ‘the East,’” writes Jon Lewis in an autobiographical afterword to this sturdy, beautifully designed volume that collects the first four issues of his cult classic mid-1990s indie comic True Swamp. Raised in St. Paul, Minnesota, Lewis fantasized about a microcosmic terrarium where “little things [go] about their serious business amid weeds and bushes”—in other words, a place where the troubles of our own human lives can be reduced to a comprehensible, even laughable, scale and reframed amid the humid glamour of nature at its most liminal, a hiding place both liquid and solid.

True Swamp follows the adventures of Lenny the Frog, a good-hearted but prickly slacker of a type familiar from many ’90s pop-culture products. Lenny moves through a world of alligators, herons, moles, marmots and, most disconcertingly, tiny humanoid fairies. This picaresque’s plot, such as it is, begins when Lenny kills a human researcher who mistakes his anti-predator camouflage for the skin markings of a rare species. Racked with guilt for this defensive murder, Lenny encounters a serial-killing reptile and his fungoid roommate, a collective of ants arrayed as a giant human body, and a sensitive mole-author composing tales in his labyrinthine burrow. Along the way, Lenny debates a number of interlocutors about the ethics of predation, the propriety of inter-species sex, and the merits of the intellectual life.

In True Swamp’s world, animals trade the names of cities like money; the names then provide their hearers with visions of other places, like young Jon Lewis’s own romantic dream of wetlands. Furthermore, instead of reading books, the swamp animals become them, researching and memorizing bodies of knowledge that make them walking texts. These intelligent tropes allow Lewis’s text to create an allegory of its own attempt at otherness, its status as dream-city and creature-book. Lenny, though, is what in our non-swamp speciesist vocabulary would be called a budding “humanist”—i.e., someone who doubts that all the cruelty of our lives is truly necessary. This leads him to voice skepticism about making art out of the brute realities of eat-or-be-eaten: “I think I’ve way over-romanticized books . . . being one seems to mean replacing good and evil with ‘boring’ and ‘interesting.’”

Lewis keeps our eye on moral rather than aesthetic categories by drawing his comic in a deliberately rebarbative anti-style. The possibilities of the comics form go systematically un-exploited as Lewis casually violates the traditional artistic rules of graphic narrative on every page. Panels are filled with multiple word balloons that erode the illusion of a single moment’s capture in one frame; shot-to-shot continuity falls by the wayside as angles are reversed or directional lines mislead the eye; a marker or brush line heavily delineates every surface in a way that makes figure and ground sometimes impossible to distinguish; and, most impressively, the animal characters are barely anthropomorphized, which gives the reader, alert for human faces and figures, little purchase on pages dense with black lines and swampy scenery.

Given all this, reading True Swamp does sometimes feel like wading through a marsh. While one can appreciate that these punk stylings resonate with Lewis’s moral concerns, they at times make this comic unpleasantly difficult to read. Nevertheless, True Swamp is well worth the effort for its bracing mix of sentiment and cynicism and its DIY aesthetic that seems so refreshingly out-of-place in the overproduced atmosphere of contemporary pop culture. Lewis, like one of his foul-mouthed characters, is obviously “tryin’ t’ come up with an idea fer some goddamn thing t’make people’s lives a little less fuckin’ brutal.”