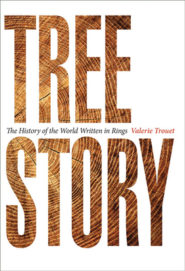 Many of us were introduced to the science of dendrochronology at a young age, during a family camping trip or a field trip to a park. "If you count the rings on this log, Junior, you can tell how old the tree was. One ring per year." While a hundred-year-old tree can be a source of passing awe, that's about as far as things usually went.

In Tree Story, Valerie Trouet introduces us to the much wider range of information that tree rings often contain, and especially their relevance to the study of climate change. Belgian by birth, Trouet began her career as an environmental engineer, and was drawn to the study of tree-rings almost fortuitously. She took a research position at the Forest, Snow, and Landscape Lab in Zurich, and later accepted a professorship at the Laboratory of Tree-Ring Research at the University of Arizona, where dendrochronology was invented. During a sabbatical in 2017 she decided to set aside the seemingly endless battles she was fighting in defense of environmental awareness and, as she puts it, "write stories of the excitement of scien¬tific discovery, about our long and complex human history, and how it has been intertwined with our natural environment and ingrained in the stories of trees."

Although the subtitle, "the history of the world written in rings," is an exaggeration, most of Tree Story is devoted not to trees themselves, but to what the study of their rings can tell us about other things. In the opening chapters we learn how tree rings can validate the authenticity of a Stradivarius violin or establish which Hans Memling painting is authentic and which is a later copy. A tree ring not only marks the passing of a year, it also offers reliable clues as to what kind of a year it was: warm, cold, wet, dry? When you accumulate data from a variety of trees, years, and locations, a sophisticated chronology begins to take shape, and the picture it presents is more detailed, in many ways, than anything to be found in written records.

Consider the case of the tsunami that ravaged Japan in late January of 1700. There are numerous records in Japan, both bureaucratic and commercial, of the cataclysmic event and the shipwrecks and floods it caused, but not a single reference anywhere to the earthquake that might have caused the tsunami. Recent tree-ring studies of several "ghost forests" in the Pacific Northwest—trees buried by layers of silt and sand—have revealed that in 1700 that region was shaken by an earthquake. Presuming that it was the cause of the tsunami, it would have to have been a category nine quake—much larger and more destructive than anything in the written record. Trouet writes: "Thanks to ghost-forest dendrochronology and the discovery of the 1700 earthquake, public-safety efforts, including tsunami warnings and seismic hazard maps, are now in place that will aid in making the impact of the next event less destructive."

But such discoveries are mere window dressing compared to the broader array of climate data derived from trees that can pin-point events and also establish more extensive timelines of stability and change extending back far into prehistory. Notwithstanding the imaginative names these timelines have been given— The Hockey Stick, The Spaghetti Plate, and The Noodle—they have bolstered the claims of those who suggest that since the Industrial Revolution human activity has been raising the earth's temperature to dangerous levels.

Trouet refers to such issues more than a few times, but large sections of the book are also reserved for examining more localized, though usually long-term and often hemispheric, phenomena such as the North Atlantic Oscillation (NAO), the Maunder Minimum, and the Terminal Classic Mayan Decline. The NAO is a well-known climatological concept that was established without the help of dendrochronology. But our understanding of it was expanded immensely when Trouet and some of her colleagues did a study combining data from tree-ring analysis of thousand-year-old cedar trees growing in the Atlas Mountains of Morocco with data from a study covering the same period of time of the rings that have developed on a stalmite growing in a cave in Northern Scotland. An inverse correlation held steady between the two databases throughout the span of time involved, though for long periods one force predominated over the other.

"What we had found,” Trouet writes,

was the driving mechanism behind medieval warmth in Europe: a predominantly positive NAO phase that kept the North Atlantic wind wheel working at full speed and sent warm Atlantic air to central Europe, resulting in the mild winters that allowed Europe’s agriculture, culture, and population to flourish. The wheel slowed down and became more erratic after 1450, at which point the cool climate and related hardships of the Little Ice Age started kicking in.

A few sections of the book are wonkish, but they're easy to recognize—and skip. It's clear that Trouet loves her field of research and wants to keep the narrative interesting so her readers can share the pleasure. To this end, she includes anecdotes about her tribulations doing field work in Tanzania as a novice dendrochronologist and, much later in her career, accompanying nine colleagues—all of them men—to study tree-rings in the wilds of Yakutsk, a region she had previous been familiar with only as a place-name in the board game Risk. Her narrative also offers us a few glimpses into the world of academic publishing, as she and colleagues repeatedly submit papers to prestigious journals such as Science and Nature, then cross their fingers.

In the course of this overview we take a look at the world's oldest trees, in the White Mountains of California, and learn about the man who cut down the oldest of them all—to count the rings. We ponder the end of Roman Climate Optimum (after which Rome itself fell), and reflect on what effect twenty years of excellent rainfall—a rare stretch, according to the dendrochronological record—likely had on the extraordinary success of Genghis Khan.

Readers of a certain age might even enjoy Trouet's scattered references to the pop music she sometimes listened to on field trips and in the lab, which include "It's the End of the World as We Know It" by R.E.M., "Wind of Change" by the Scorpions, and "Fake Plastic Trees" by Radiohead. In any case, such breezy stuff helps to maintain that geeky enthusiasm that makes the entire book such a pleasure to read.