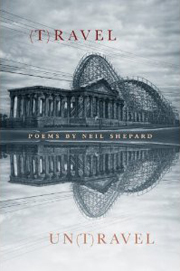 The title’s the tip-off: this is no ordinary adventure. In Neil Shepard’s fourth book of poems, we’re snatched up as if by the fabled Roc and dropped into one far-off locale after another, subject to travel’s transformative power not only to delight and excite the senses, but also to overwhelm and disorient. Shepard thereby challenges our very sense of self, jolting us into new ways of seeing.

Shepard has traveled worldwide and has spent considerable time among the Marquesans in the South Pacific and the Han of urban and rural China. The resulting poems immerse us in richly sensate environments. Travel, they show, offers astonishments and continual challenges, “unravelings,” as Shepard would have it. Physical and mental rigors, lack of a common language, illness, and sometimes repulsive assaults on the senses can reduce the traveler to what Shepard terms “a nub of personality,” but are also a catalyst for the “journey out of our common senses and into the world of alert witness.”

Epigraphs from Whitman and Williams prepare us for the first section, in which the poet records some of his own initiation experiences. They begin on Monkey Forest Road, Bali, where the traveler awakens under mosquito netting next to his wife, the cacophony of the market’s harsh sounds and acrid smells. He can either burrow deeper into his wife’s flesh or go out to meet “the toothless woman / who drapes her stained sarong around [his] waist / and hisses sixty rupiah.” Or he could “descend the steps to Gulung Kawi / where secret burial chambers of the monks / have been laid bare.” He worries, “How will I arrive there unscathed and prepared?” The answer is he won’t, but he has consented to be here and, not without anxiety, he goes “Out the door, down into the streets with you— // lost in the funeral dance on Monkey Forest Road.”

With a display of exuberant alliterative imagery and syncopated rhythms, the poet shifts to Paris in spring, where “mouths yawn open for air, taking it even from other mouths, other lungs.” Then, we’re in Corfu. The poet and his partner return from a tour of the island’s interior and feel “a certain nakedness remembering / the backfire of our mopeds on the mountain / road,” how they “blew black smoke in siesta-sun / until the children pegged pebbles,” how huddled beggar widows “caught us / in the cross hairs of their eyeless stares.” Here, as elsewhere, Shepard is acutely aware of the traveler’s propensity to despoil, to take without giving.

The poems of Part Two center on themes of conflict and empire, ranging from China’s Great Wall to post-colonial Marquesas; from Hadrian’s Wall in Northern England to the walls of San Gusme, Italy; from Cornwall, England, at the beginning of the Iraq war to a tiny suburb near Paris where the poet meets Holocaust-deniers and others who supported the Vichy government in France. In “Following in the Footsteps of Melville,” whose novel Typee is set in the Marquesas, the poet implicates “artist rovers,” called by the natives “white liars”: “Those who steal // a song, a story from the heart / of things, who leave little in return. / And I’m another. . .”

Part Three involves constructs of the mind: philosophy, the arts, the trappings of ethnicity and gender. In “North Wales, Snowdon Philosophy,” dedicated to Wallace Stevens, the poet makes an arduous surreal mountain climb through mists and clouds, himself an object passing objects, “all bearing themselves / out of clouds on Mount Snowdon.” The experience leads to a powerful and ambiguous affirmation:

. . .one must wake
(mustn’t one) and believe
something up there exists
as certain as the end of earth

Locales such as Versailles, Stratford on Avon, Giverny, and St. Remy flavor Part Four, which considers the aging artist as subject: in “Aubade West of Paris,” the poet urges himself to “Get dressed, and get to your mumbly place, / your mantic writing table.” With age, the artist must dig “to make sparks fly, then dig deeper until the cut / trickles with something wet and warm, and deeper still / until we’re into the guts of the thing down where it lives.” The poem “Biographers” contrasts the youthful and older artist: “Old men should be biographers— / when they’ve arrived at the borders / of world-class winds, and words / fray against the indifferent distances.”

The ravels of travel—its demands and confusions—are viewed within a larger perspective in the book’s final section, which reveals Shepard’s transcendental roots. “Travel,” the poet tells us “is the Voice / in the Void, the I’s passport to Thou.” At times we find the poet exhausted by the voyeurism of travel and cut off from a vital sense of self: “even as the eyes graze a painting or monkish cell, we require another place, / solitary, inside us, that just might be bricked up for good.” The rich imagistic poems of the final section, however, fully persuade us that travel’s unravelings—its anxieties, tedium, physical discomforts, sensory overload—are integral to its enrichment of personality.

Shepard is an adventurous traveler and a truth-teller; by refusing to resolve their ambiguities, these poems provide the reader with complex and haunting experiences. In “Ghost Talk,” the poet describes how he was and wasn’t altered by his travels:

I was the one
with his eyes blanched
from staring out to sea. It took a while
to believe I would escape this place
and finally come home to you

Shepard has come home, and he has brought these poems as gifts.