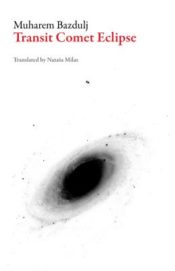 In Transit Comet Eclipse, we are asked to consider the movement of celestial bodies—Venus as it transits the sun, the dance between sun and moon as they block and shadow each other’s light, the flare of a comet. These astronomical wonders are not probed in depth in the novel, but they create a thematic atmosphere to follow the more mundane movement of characters as they cross borders and travel through frontier lands—as they flame with life and fade into oblivion. The book is short but powerful: It challenges its reader to understand territorial divisions as complex historical phenomena with economic, political and cultural dimensions, and it shows that these divisions matter—a lot. In fact, these divisions and the identities they help create and reinforce could be understood as something like fate, a fate as predictable as the next transit of Venus or total eclipse of the sun.

Transit Comet Eclipse is made up of three parts. The first section, “Transit,” tells the story of a priest from Dubrovnik who is traveling with an English diplomat’s family from Istanbul to St. Petersburg in the middle of the 18th century. The priest is Ruđer Bošković, a real historical figure who straddled the line between Jesuit Catholicism and the culture of the European Enlightenment and the Scientific Revolution. As a good Enlightenment empiricist, Bošković seeks out information in order to understand the world around him; the novel opens, for example, with the priest grilling a man at the marketplace about how many Turks, Christians, and Jews live in town.

The central action in this part of the novel has to do with the travelers crossing the territory of Moldova. Bošković is shocked by Moldova's otherness, by how close to “known” Europe it is and at the same time how incredibly foreign it appears to him. “From Moldova,” Bošković reflects in his journal, “I carry images of beauty, wasteland, fear, and dream.” With this, Bazdulj gives the reader a taste of the rich tradition of Balkan and European historical fabulists, circling back to the writer of the section’s epigraph, Ivo Andrić.

The “Comet” section abruptly shifts gears to tell the story of Maria Alexandra, a girl from Moldova. Maria is smart, sweet, and incredibly attached to her father. The characterization of her beauty and precocity trigger a nervous anticipation; things will only get worse, one assumes, for this poor girl. She is poor, of course, as is nearly everyone in Moldova. Her father dies. She moves in with her grandmother to finish high school. She starts to smoke, to drink. At a local bar, she meets a man who says his name is Boško (as in Bošković) and that he is in Moldova from Croatia to work as an assistant on a sociological research project. She falls in love with him, and he convinces her to run away with him to Croatia, where she immediately falls into the clutches of the sex trade. To prevent the violence and degradation that await her, she brutally takes her own life.

“Comet” is a gut punch, a window into the absolute worst of humanity. The horror goes well beyond the violence of the sex trade, beyond even Boško’s villainous deceit; it strikes at the micro and macro structures that create the conditions of poverty and desperation and the mechanisms that exploit these conditions. Life on the exploited periphery, the novel implies, is partly a reflection of the “civilized” core.

“Eclipse,” the novel’s third and final section, presents a short bildungsroman of the presumed writer of the novel’s first two parts. It is the story of a would-be author finding his voice and perspective: The Writer searches for a subject to write about, and after a lengthy period of ennui, he finds two topics that captivate him—the life of Ruđer Bošković and the story of a woman caught in the Bosnian sex trade, which he encounters as he accompanies a fellow journalist to a nightclub called the Queen in Bosnia’s Lašva Valley. The relationship between the stories seems at times forced, as when the writer reflects on a sex slave named Olga that he and his colleague encounter at the Queen: “She said she was from St. Petersburg, the Writer remembered, the same Petersburg to which Bošković was headed from Istanbul, the same Petersburg that Bošković never reached, the same Petersburg to which Olga wanted to return, but he was afraid she wouldn’t.” At other moments, however, Bazdulj and translator Nataša Milas achieve a striking beauty, such as their rendering of the Writer’s feverish thoughts while laid up in a French hotel:

During the fever his thoughts were confused as if in a recollection of dreams. The features of Sandi Thom and Kate Melua synced into one—the face of Maria Alexandra. The darkness of the Queen nightclub turned into the darkness of the eclipse. The light of a cigarette thrown from the window was a comet. Everything merged: the Charles and Mystic Rivers with the waters of the Lašva, the mysterious river of his childhood; the transit of trafficked women and the transit of Venus over the Sun; Dubrovnik’s view of the sea of his birth and the image of the sea he sees out his window.

Such moments of creative, disordered epiphany inspire the Writer to begin his story, and he begins precisely as Transit Comet Eclipse comes to an end.

For all of its playfulness, there is a haunting core at the heart of this novel, expressed most poignantly in one entry of the Writer’s journal: “Maria’s problem, however, was not that she was born too late, but too far to the East. Her problem was not that the world was indifferent, but that it was evil.” The novel might be able to merge landscapes and move across frontiers, but divisions and their accompanying hierarchies and exploitations remain firmly fixed on the world’s map as well as in its collective consciousness—with tragic consequences.