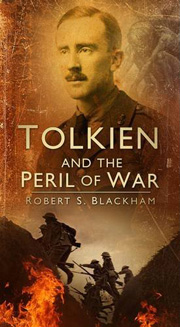 The English era of World War I comes alive in this photographic and biographical tale of icon J. R. R. Tolkien's experience of youth, war, injury, and marriage. There are plenty of pictures and maps in this account by Robert S. Blackham, who connects the reader to a history that had a profound effect on Tolkien, the immediate literary fruits of which were not published until after the author’s death.

Before he became a professor and wrote his classic novels of Middle Earth, Tolkien was a loyal soldier. He was removed from the conflict because he caught Trench Fever and the flu, but the war remained with him, as evident in The Lord of the Rings. Like fellow Inkling C. S. Lewis, Tolkien sought to explain war to younger people, even though he attests to being uninterested in writing an allegory. Tolkien did seek to create a "new" myth for England, and The Lord of the Rings was later championed by a counterculture that enjoyed the pipe weed, idealism, and post-nuclear sagacity of the epic’s heroes.

Tolkien and the Peril of War does a good job of showing some of the connections Tolkien made from the English land to his classics; the highlighted Battle of Somme, for instance, left many places in England without an entire generation. Though Tolkien was one of the survivors, he had lost many of his friends, leading to a profound sense of sadness he expressed in his Miltonesque work The Silmarillion, which he was not able to get published during his lifetime. The book ends on a more hopeful note, with Tolkien off to marriage, scholarly success, and the literary stardom that makes his work as popular today as ever.