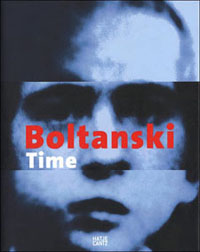 After World War II, as thousands of children were displaced from their families, lost and homeless, the Red Cross publicly distributed posters in an attempt to find family members who might recognize their faces. Looking like a page from a school yearbook, the black-and-white posters contained photographs of the children’s faces and basic identifying information, along with an explanation of the situation and a call for help. Fifty years later, in the artists book Diese Kinder Suchen Ihre Eltern (Children in Search of Their Parents) (1994), French artist Christian Boltanski reprinted some of these post-war photographs. Citing one child per page, and rendered even more visually degraded by re-photography and the enlarged scale, in Boltanski’s hands the images resemble FBI “Most Wanted” ads. But in this case the children are wanting, an inhumane crime done against them. An opening note states that the artist wonders what has happened to these children, “Has fate brought them happy or unhappy lives, made them rich or poor?” He suggests that their lives are similar to his, and to ours. “We, too, are in search of our parents.” At the end of the book, a closing appeal asks, “If you recognize yourself or if you know who these children are, please write to Christian Boltanski.”

Writing about the various aspects of memory and forgetting in Boltanski’s work—one of several essays collected in the catalogue published for the exhibition titled Christian Boltanksi, Time—literature professor Aleida Assmann points out that family memory as marked by old photographs is destined to disappoint. As those who remember the pictured individuals die off, generation after generation moves farther away from being able to identify whom the photos represent. At some point in every photograph’s lifespan, those who can give real reference to the image fade away, and along with them, any definitive tie the image has to the past. However, although the specific family memory may disappear, photographs can still manifest a cultural memory, albeit one that is necessarily abstracted and generalized from particular individuals. Unless a person enters the history books as someone famous, the specifics of their life are ultimately forgotten, despite being ontologically concretized in a photograph. As an archive of memory, then, and against the clichéd understanding of how they function, photographs eventually fail, even if someone’s image continues to represent a trope or category.

August Sander, photographing in Germany before the war, understood well this particular photographic limit. His ambitious yet unfinished project, Menschen des 20. Jahrhunderts (People of the 20th Century), attempted to create a comprehensive anthropological catalogue of the German people, classified into various social “types.” His documentary-style portraits are titled by a person’s profession or class, rather than by their name: Pastry cook. Young Farmer. Anarchist. Circus Artiste. Despite the obvious idiosyncrasies of each person’s face and body, it is assumed that the unique individual at the center of the photograph will be forgotten, remembered only by what we can discern from his or her dress and surrounding context in the most generalized way. Evidenced by Sander’s categorical titles, the One is taken to represent the Many from the start.

Boltanski exploits this lost photographic reference and its inability to sustain family memory repeatedly in his work. Where the Red Cross poster relied on the temporal proximity of its publication to the events that transpired—its effectiveness depended on people being able to recognize the real person in the photos—for most of us in Boltanski’s version, Gerhard Gronau, Anita Swiantel, Werner Klaar, Ruth Scharfe and the other named and unnamed children can only be seen culturally as lost children in search of their parents. The loss of their specificity mirrors the original loss created by the war. Nostalgia for any single individual is cut short, replaced by the recognition of the more general human condition at stake. Bébés négatifs (2002), two black-and-white enlarged appropriated negatives lit as to appear positive, reworks a tradition of one Warsaw newspaper that prints full pages of photographs of newborns, taken on the day of their birth. Given the broader collection of Boltanski’s work, the images that in normal settings celebrate a child’s new life here commemorate his or her eventual, impending death. To borrow a phrase from the philosopher Martin Heidegger, Boltanski reminds us that we are beings-toward-death at the very moment of our birth. Taking the void at the heart of photography to a logical extreme, Mes morts (My Dead Ones) (2002) eliminates the personal photograph altogether, representing several dead relatives and friends each by a large white metal panel that simply states their birth and death dates in black letters. Here the failure of the personal photographic memento as an aid to memory is acknowledged completely. One feels the lack of something more personal: an object, a photo, a story. There are in fact only the beginning and end points on a timeline.

This tie of photography to death, and to the relentless passing of time and its concomitant forgetting, works against the grain of the medium’s organic and material dependence on real, physically present subjects. In other words, photographic portraits rely on the living persons of both the photographer and the photographic subject. It also works against the idea of the photograph as a relatively reliable historical document. In “Deathwatch on the Southside,” one of several literary excerpts included in the Christian Boltanski, Time catalogue, Jorge Luis Borges names death as “a mystery whose empty name I know and whose reality is beyond us.” We so easily speak of death, but it is experienced only as it occurs to someone else. The mention of death as an empty concept foregrounds the eventual lack of reference that confounds photography. Like death, each photograph becomes an empty concept, something for which we know a name but not a reality.

Coming full circle in his contribution to the catalogue, scholar Gabriel Ramin Schor, citing Günter Metken, points out that death deprives photos of their referent, this lost reference being a hallmark of Saussurean structuralism. But paradoxically enough, Boltanski’s images don’t operate as “pure signifiers,” utterly devoid of original reference. He simultaneously reminds us of their historical tie while embracing the abstraction from their historical moment. In the catalogue interview, the artist stresses that he is not a 21st-century, post-humanist artist; because of the accident of his birth date, he is concerned in a “fairly old-fashioned” way with 20th-century ideas. That he is able to take the loss of reference, a potential harbinger of radical cultural relativism and post-humanism, and make it palpable in its nothingness—to bring us back to death—attests to the 21st-century need to confront a world increasingly devoid of enduring reality.