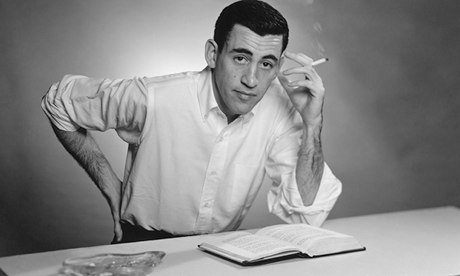 Last November, a pirated publication of three uncollected stories by J. D. Salinger, entitled Three Stories, appeared on torrent and file-sharing sites. The origins of the edition are murky—assembled and printed by someone in 1999, sold sometime later to someone else on eBay—but it appears to be the genuine thing, offering three stories that will be brand new to most readers: “The Ocean Full of Bowling Balls,” “Birthday Boy,” and “Paula.” While Three Stories has been expunged from much of the Internet (one can only assume by Salinger's literary trust), and the PDF is now more difficult to obtain, this pirated collection offers a fascinating look into the much-discussed, little-seen fiction work that sustained Salinger financially before the runaway success of The Catcher in the Rye crashed into his life.

The real story of interest here is “The Ocean Full of Bowling Balls,” which is vintage Salinger. It describes the last day of young Kenneth Caulfield’s life, a day in which he travels around his home in Cape Cod, touching the lives of those around him with his preternatural wisdom. Narrated by the eldest Caulfield, Vincent, the story throws us into a world that is unmistakably Salinger’s, where wise, young siblings try to save our souls as a quirky voice pulls us breathlessly through the pages. But Kenneth is the centerpiece of this story. A lover of baseball who copies lines from his favorite poems on his catcher’s mitt (famously evoked in The Catcher in the Rye), Kenneth is an almost mystically pure-hearted boy who dispenses sage advice to his older brother Vincent. Vincent is a writer, or at least trying to be one, and comes up with a rather mean-spirited story about a man whose wife only allows him to go bowling once a week. After he dies, she discovers another woman leaving flowers on his grave, and the story ends with her throwing the bowling ball through a window. Kenneth says:

Vincent notes: “He looked at me with his eyes shining—yes, shining. The boy’s eyes could shine.” One can’t help but be reminded of another sage young character of Salinger’s: Seymour Glass, the voice of “Hapworth 16, 1924,” whose mystical rhapsodizing was attacked after the story’s publication as a form of self-indulgent, literary waywardness on the part of the author. We think too of young Teddy, the other Vedanta-inspired Glass brother, whose precocious enlightenment extends even to a knowledge of his past reincarnations—paralleling Kenneth’s confident promise that he will “stick around a while” when he dies.

“The Ocean Full of Bowling Balls” finds Salinger’s prose spare, lean, and engaging, allowing his larger ideas about youth and morality to shine unimpeded. A review by Jay Parini in The Guardian says the story “would not have seemed out of place next to ‘A Perfect Day for Bananafish’ or ‘Teddy’,” and that is no exaggeration. A thoroughly enjoyable read for long-time fans and non-initiates alike, “The Ocean Full of Bowling Balls” also provides one of the keener assessments of Holden Caulfield in print, coming from Wise Kenneth: “He’s just a little old kid and he can’t make any compromises.”

It is certainly strange to think that now—four years after Salinger’s death in 2010 and five decades since the publication of his last book—is perhaps the most exciting time to be a fan of the author. Most of his uncollected stories, printed in the literary magazines of his day, are easily found nowadays on such labor-of-love resources as Dead Caulfields. And the recent book/documentary film Salinger promises that five new books are forthcoming, further expanding the Glass and Caulfield family sagas, as well as shedding light on Salinger’s experiences with war and the Upanishads.

The other two stories in the collection—“Birthday Boy” and “Paula”—are more like drafts, underwhelming at times yet offering fascinating insights into Salinger’s writing and editing process. But should they have been made public against his wishes? The pirated collection does give readers access to these stories, locked away as they are at the Princeton University Library and Harry Ransom Center—and, in the case of “The Ocean Full of Bowling Balls,” not legally available for publication until 2060. But here’s another perspective: these stories show a formidable writer learning his craft, exploring new narrative angles, making mistakes, failing. Perhaps Salinger did not want them out in the world because a finished piece of fiction is something like a magic trick—the more effortless it appears, and the less we know about the long work that went into creating it, the more we appreciate its effects. With these “new” stories from Salinger, as well as all the promised forthcoming material, the problem we are faced with is how to remain fans without ruining the magic.