A Hagiography of Heaven and Vicinity
Michael Joyce
Broadstone Books 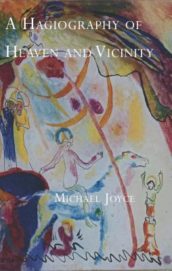 Michael Joyce is often referred to as the father or grandfather of hyper-fiction, and is an important figure in the world of hypertext. Writers such as Umberto Eco and Robert Coover have touted his genius for years. A Hagiography of Heaven and Vicinity is Michael Joyce at his most linear and intellectual. In this collection of prose poems and poetry, he is at times as intellectually rigorous and theologically inquisitive as T. S. Eliot, and yet his work reads as contemporary as anyone writing now.

Like Joyce the progenitor, Michael Joyce can be as staunch and brilliant as any Jesuit. Hagiography comes in a binary form, part one being “Lives of the Saints,” and part two being “Desert Dialogues.” The poems and prose reference figures such as the saints Paul and Thomas, but also Karl Wallenda, the high-wire artist. They are philosophical, impersonal, allusive, reflective, brilliant, erudite, and yet very much of our time. One could easily replace a book of daily reflections with this Joycean book.

From nothing but the dawn
was once a pencil of uncertain light
viewed by the desert fathers perched
like buzzards on makeshift shelves
hovering above a cloud of nothingness
Wile E. Coyote speeding by in silence
running laps in the dim lavender dawn.
(from “Ab nihilo) 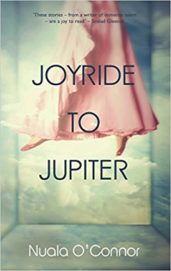 Nuala O’Connor’s prose in Joyride to Jupiter is by turns luminous and full of sly wit, and her range of storytelling is imaginative and broadly compassed, including elderly couples facing dementia and even a highly oneiric narrative of the poet Elizabeth Bishop living in the jungles of Brazil with her female lover. That last story, so full of twists and turns and surprises, is really about a young Brazilian boy, though, someone who works briefly for the North American writer.

In “Napoli, Abu,” an incongruous pair of women, one young and hip, the other older and dour, have decided to take a holiday together in Naples. Their conversations about love and life are hilarious.

I sipped my Falanghina and glanced at her: the helmet hair, the miniscule lips, the dour set to her face. Poor shite—what man would even look at her?
“My boyfriend is married too,” she said.
“You have a fella?” I sat up and leaned towards her. “Seriously? A married man? Well, get you, the capaillin dubh.”
“I’m no dark horse, Tara. You expect people to be a certain way, that’s all. Because of the way they look.”

Of course, this being Irish writing, there is always tragedy lurking in every corner of every story here. Occasionally the darker notes obtain, such as in “Girlgrief,” a story about an Irish couple coming to Sweden for their son’s funeral and then interacting with their four-year-old granddaughter, who asks: “Is God made out of sand?” Kelly, that young girl, asks her grandmother if Kelly’s own husband will die when she gets married. Her grandmother says that no, he won’t. “’Actually, he will,’ Kelly says.” 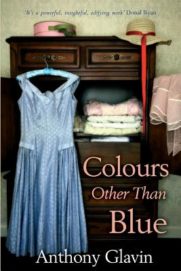 The Cambridge-raised, Harvard-educated Anthony Glavin moved to Ireland in 1974 and has, more or less, been a resident there ever since. An editor at New Island Books, he has written short story collections and one other novel, Nighthawk Alley, before embarking on this new ambitious novel. Some writers draw from life, others from the imagination, while the best use experience and fancy equally. There is then a special kind of book in which a writer combines both what they know and what they imagine with their sense of compassion, insight, and wonder about the human condition. Colours Other Than Blue is just such a novel.

In Colours, Maeve Maguire grows up in Boston as the child of two Irish immigrants. She and her brother live across from the Boston Common, as their father is the superintendent of the building, while their mother drifts in and out of bouts with mental illness. Maeve becomes a nurse, gets pregnant but does not marry, and moves as a single parent to Ireland, where she eventually takes a job at a nursing home, and then becomes the head or matron. The novel is a diary that Maeve keeps of her comings and goings in Dublin, along with her reflections of life in Boston with her immigrant parents, both of whom, now deceased, Maeve strives to understand and come to terms with. Improbably Maeve has sought the counsel of a nun who is a therapist and who encourages Maeve to keep this journal.

This is a quiet, psychological novel, all of it told from the point-of-view of a woman in her late thirties who is coming to terms with her own mortality and life ambitions, not to mention the ghosts of her parents, one of whom she loved (her father), the other whom she endured (her mother). This is contrasted with Maeve’s day job as the matron at the nursing home in Dublin, stories about which she tells in her journal with great sympathy and humor. Wonderful little jokes are sprinkled throughout the text, and Maeve’s detailed observations about the quotidian, to borrow a word from the Irish, are “priceless”:

“Why did the Buddha never vacuum?” Declan asks last night. “Is the dust that obvious?” I wince, but Declan just points at Siddhartha on the coffee table. “Because he hadn’t any attachments, Maeve.” 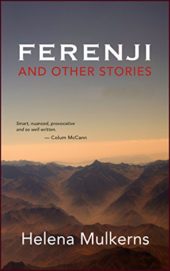 No country has produced writers whose lyrical impulses seem so effortless, but the lyrical is a mixed blessing for Irish writers, just because it is so easy for them to respond to the world in that register. Helena Mulkerns’s Ferenji and Other Stories, by contrast, is a book in which the lyrical is replaced by the observant eye and real experiences. Mulkerns worked for the United Nations peacekeeping operations in Central America, Africa, and Afghanistan. Her stories concern real people working, often idealists, whose principles, beliefs, and sense of social justice are challenged every second by the randomness of war’s violence and its crushing indifference to children and families. Against such backdrops, Ferenji documents intimate encounters by a string of jaded Western observers and do-gooders whose moral indignation has been rubbed smooth by the exigencies of survival in some of the most brutal places on earth.

Take the first story in the collection, “A Child Called Peace,” in which Selam, a small child, notices that one of her family’s goats has strayed off into a rocky terrain. Rather than incur the wrath of her family for losing the goat, she goes off to retrieve it, only to be blown to pieces by a landmine. This is immediately contrasted with two West European idealists from Ireland, Brid and Thomas:

She felt uncomfortable, even overwhelmed patrolling through ruined villages or holding camps, yet Tom seemed to just treat it all like a good pensionable job, counted the days to his home leave and listened to the Irish radio station broadcast at the Base, one foot at home and one in a war zone. Maybe that was the best way to be.

The disparate worlds of NGOs (nongovernmental organizations) and the indigenous people they supposedly are there to help converge in the makeshift hospital, when the full impact of the landmine event becomes apparent. Mulkerns writes a prose of deceptive unadornment set against elemental landscapes and has an almost antipoetic voice; this starkness makes for incredibly dramatic effects. Ferenji is a read not to be missed.