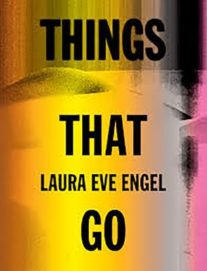 The first book of poetry by Laura Eve Engel, Things That Go, is on its surface framed around the biblical tale of Lot’s Wife, who infamously was turned into a pillar of salt as she looked back upon the city of Sodom. The story is both adapted and used as a thematic frame by Engel at various points throughout the collection, though some poems relate more directly than others to the inspiring story.

It takes the book a while to get there, but after a handful of “Lot’s Wife” poems (sharing the same title and interspersed from the beginning of the book to its end), “Lot’s Wife Speaks” brings the metaphor and framing to its greatest elevation: “what is sitting too long at a desk / in the world without moving / what is a burden // to move and keep moving // to be taken / by the blast / by a stillness // by our looking” it reads, sending the poet’s musing out to the reader as a call, a revelation, and a beautiful epiphany. The poem continues to its close with: “is it a burden, god // how / we may become changed.”

The metaphoric use of Lot’s Wife is a subtle experiment concerned with the greater meaning behind that story. Things That Go is further concerned with human movement through time and the tension we humans have when seeking to understand growth, loss, and gain. Movement, as well as the surrounding moments of rest and reflection, can best be understood through Engel’s focus on several connected images, most importantly the desert. Often the deserts of Engel’s visionary world are those within New Mexico (in the book’s “Notes” section, she admits to being inspired by Tony Hillerman’s The Spell of New Mexico and other writings about the place). In a poem arising from Engel’s attraction to the piece of landscape art “The Lightning Field,” she writes “Light makes the desert look like the known desert.” Clarification is what Engel seeks when she talks about moving from place to place, from moment to moment; it is what we do with that movement, how we know, that pushes the book and its focus on Lot’s Wife even further.

In the poem “White Sands,” she writes again of this observation and its importance: “the shifting marked in slowness / or too speedy to be looked directly at // if I were to follow the sun directly / if I were to whirl like what’s left behind.” Moments like these offer a geographical and tangible center to the motion of humanity. Engel utilizes her space and effort for the ever-present poetic “witness,” which in this case is holistic awareness over morality, judgment, and the simplistic allegory of the biblical influences.

In Things That Go, the entirety of the world is moving, and our understanding along with it is moving too—often to our surprise and overwhelmingly beyond full comprehension. At times, the moment itself is enough to think about: “it’s not a bad place to be / out of my own hands // in the dry season / or a love that knows no next move // beyond repeating dunes sections / break apart // the horizon steady” The desert, in other words, is still there, and though out of control, it provides for us, and provides us with itself.

Aside from desert poems, Things That Go features poems about buildings and the built environment, about navigating adulthood and trying to find a belief in the complexity of relationships. The subject matter is enjoyably collected and collectivist: the poet moves through the world and finds value in it. The here and there. The then and the now.

While most of the poems feel accessible in language and tone, some are more prosaic, scrawls for the notebook: “In a Museum, I Am Moved to Contemplate Pack Animals” opens “Lately I’ve been looking at things that hurt me. / Caring, as I do, not at all for art.” There is also occasional abstraction indicative of the poet’s lyrical leanings, as seen in the middle of “Burden of Belonging”: “to whom do some of us / not belong / who hurt some of us so // but here they come again / this history of men.” And then there are poems that flutter across the page with endearing catharsis. In “First Things,” one stanza reads: “on a day like today / with weather / I have you-thoughts”; moments like this charge the book with a holistic human feeling.

A dense and lengthy collection, Things That Go makes a valiant effort at a contemporary reinterpretion of Lot’s Wife, and its strands of imagery, including that robust Southwestern landscape, offer the book an impressive cohesion, providing balance and focus to an excessive range of topics. It is exciting to think about Engel’s next work, which hopefully will continue to provide the reader with exquisite opportunities for their own reflection and sense of wonder.