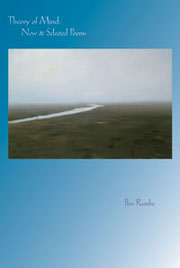 In a cosmopolitan society, “home” can be a difficult concept. For many of us, our day-to-day lives take place far from our communities of origin. We move for educational opportunities, for jobs, for more conducive political or economic climates. We move from the country to the city, or from one country to another. We carry our homes in U-Haul trucks, in suitcases; we carry them in our memories and in our speech. In her recent chapbook, Bibliography, New Orleans native Tonya Foster exemplifies this last tendency: she creates a linguistic New Orleans through a concentration of vernacular phrases, place names, and people’s names. In the book’s alphabetical litany, Foster moves the reader from “alcohol, Algiers, / alligator, Amazing Grace, / Amelia, Angola, Atchafalaya,” through “Zataran’s, Zulu, zydeco.” The litany is accompanied by the statement, “Only after taking in her mother / landscape— // —only after, is speech / possible.” For Foster, we speak out of a place; informed by geography, we find a vocabulary that ties us not only to our homes (real or imagined as they may be), but also to the function of speech: our interface with the world “outside.”

In the new poems that open Bin Ramke’s Theory of Mind: New & Selected Poems, we see Ramke writing toward the same altered and distant home; elsewhere in the book, he revisits his career with the idea of “home” in mind. Ramke has long been a poet concerned with origins: etymology, the classical, and personal mythology are all continuing tropes in his poems, which have charted, throughout his career, the active engagement of a curious mind. Like Foster, Ramke is a native of the Gulf Coast; like her, his displacement preceded the damage done by hurricanes Katrina and Rita. Still, these hurricanes, and the fundamental changes they have made to his native region, seem to function in Theory of Mind as a lens through which to view Ramke’s thirty-plus year poetic career. Of course, the business of a Selected Poems is always a looking-back; in Theory of Mind, however, Ramke accompanies his career retrospective with a fresh set of poems that allow the changed state of a former home to stand-in for the shiftiness of consciousness required by the act of looking back—or simply the act of looking. Nostalgia here calls up a set of emotions that revise themselves as soon as they are felt: “not nostalgia, / just home; not home but humility, / the humiliation of symmetry plain and / periodic agony not agony but a ghostly monotony.”

Structurally, Theory of Mind is framed by two sections that repeatedly return, in their imagery and concerns, to the hurricanes and their aftermath. The book begins with “Anomalies of Water,” a nearly book-length collection of new poems which investigate, among other subjects, what Ramke calls “the cloudy nuance of home.” In “Custody of the Eyes,” he demarcates both the place and the time of the “home” that functions as an inspiration to so many of these recent poems:

Where they paint porch ceilings a shade
of blue you see on good days as if
through to sky two years after the storms
a land is streaked with blue, plastic under
which roof and rafter remain erased.

Similarly, Ramke ends Theory of Mind with sections from the long poem “Tendril,” the title poem of his most recent book (Omnidawn, 2007), and the only poem from that book to mention the effect of the storms on his childhood home:

(no, see—I saw this, the house standing
but the walls by the storm away        taken
a kind of neatness to it, unkindness)

Ramke’s engagement with the idea and geography of his damaged home leads to some of the most compelling poems in Theory of Mind, as, in his recent work, the idea of home arises, submerges, and recurs. Elegy is an energizing and illuminating source in Ramke’s poetry, which is at its strongest when able to provide an emotional resonance to the accumulations of textual fragments, equations, marginalia, and digressions that make up his signature style. Because he is not content to mine pathos or nostalgia for their own sake, they occur in his poems as startling kernels of interiority. In “Lustrous Demonstration,” for example, a discussion of the Latin and Japanese plant names yields a reference to the sweet potato, “commonly called yam in some united states,” followed by the surprising parenthetical “(I lived there and do no longer it was / called Home; called home is a name for death).” This gentle pun, in which the Southern vernacular phrase emerges, ghost-like, from beneath the merely nostalgic surface, asserts the linguistic dimensions of geographical transience. Erupting with a submerged personal past, the regional vernacular interrupts the distant speaker, brings him back to himself.

Ramke’s particular gift, as shown by both the new and older poems in Theory of Mind, is a poetics spacious enough to accommodate a range of vernaculars (scientific, mathematical, regional, therapeutic, etc.) with an often-uncanny ear for connotation and slippage between discourses. “I was able / to make sounds and to live among sounds,” writes Ramke, and his work suggests that it is actually among those sounds that our lives take shape and meaning. The making of sounds may be a game we play with ourselves:

Or it might be a way to create meaning, as in the phrase “Ignis gnosis, to ignore is to ignite,” where the sonic relation of the words suggests a para-etymology. Ramke returns often to etymology as both an explanatory device (“how odd that anguish has nothing to do with angle—to bend, as a / fishhook...the words I mean”) and a means of insisting on the materiality of language, which carries a history, and may also be functional, a tool:

. . . a metallic scent which was a hint
a word related to hunt but not exactly a search an opportunity
Do you know the invention of tools, how to?
You, Human, you made them yourself. It is how
you became immortal, making things.

Because, for Ramke, words function like light, as both particles and waves (things-in-themselves and things that carry meaning), his poems enact a tension between language as opaque and as transparent. This tension is sometimes expressed in puns, like: “let us observe a moment of silence. What color is it?” But more often it is expressed through disparate texts or textual modes set side-by-side, allowed to resist or shade into one another, as when Ramke interrupts a narrative moment to deliver a brief treatise on the chemical composition of tears:

playing a flute to rescue him so she wept
and they wept water with and various salts
besides lysozyme,

the antimicrobial properties of tears have been explained
by their high concentration of lactoferrin, betalysin, and

The disjunction between the language of narrative and that of science is here the point: both folk-tale and chemistry are language-centered enterprises that aim to explain ourselves to ourselves. Neither system is more “explanatory” than the other—nor, Ramke might suggest, is either one more fitting than the other for poetry. In fact, both systems offer, at best, only a partial system for understanding ourselves, and we choose to neglect one of them at our own peril.

It is this radical inclusiveness, coupled with a fundamentally lyric impulse, which makes Ramke’s writing so important. Unlike many poets whose work shares a postmodern impulse toward collage, Ramke is ultimately interested not in de-investing language of narrative content, but in making the self intelligible to itself—and to the reader. Looking over his career to date, as Theory of Mind allows us to do, we see a poet whose work has grown not only in scope and range, but one that has also, over the course of three decades, become more personal, accumulating a biographical narrative at the same time that his writing accumulated density and complexity.

One recurring trope this book highlights is the relationship of father and son. In his earlier poems, this relationship appears obliquely, as in “The Magician”: “From up my own sleeve I came / and chose my father, / a volunteer from the audience.” This father-figure is lovingly rendered, but mythic:

In the hat we slept together
dreaming each our games
of solitaire.
We awoke old;
forgetting everything
we bowed goodbye.
I last saw him walking away
trying to wipe his eyes
with a white handkerchief
that kept becoming a pigeon.

Contrast this father with depictions later in Ramke’s career, which add (and often repeat) narratives from Ramke’s childhood experiences which paint his father as a specific individual:

He took me to his work inspecting the boilers
at the hospital, caves he guided me through he knew

The personal nature of this image—and many others in Theory of Mind—allows us a sense of Ramke as a poet of surprising wholeness, for whom the life of the mind and the personal life (its places and relationships) are interdependent and of equal importance. This wholeness is Ramke’s gift and challenge to his reader, who must read the work as it is written: with a whole intelligence born of curious engagement with embodied experience. “I used to live in a body. I now am that body, / not inhabitant,” Ramke writes. Written from the body and the intelligence, this is poetry that asks the reader to rise to its level.