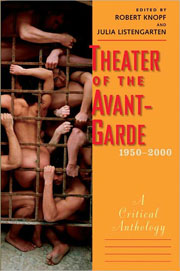 This anthology offers a rare combination of breadth and depth, without becoming a brick-heavy tome of plays. While such a collection seems destined for the hands of undergraduates, it’s a useful text for anyone wanting greater entrée into the world of the theatrically avant-garde. A much-needed amalgam of theatrical theory and practice, it provides works within their aesthetic context and theories reinforced by scripts; more importantly, it takes on the great question of innovative performance: what was that? Anyone who has ever left a theater enjoying that fabulous question will find the beginnings of the answer in this collection. While the anthology is unfortunately typo-ridden, its otherwise strong content is further strengthened by a thorough index and solid bibliography, giving readers the opportunity to move further into the unexpected.

Like much avant-garde work itself, Robert Knopf and Julia Listengarten’s anthology assemblage coheres around a collection of loosely structured yet fundamentally valuable concepts. Adhering to a narrative convention that flows chronologically would be a disservice to the collection’s content. The aesthetics being explored do not flow steadily one work to the next, one decade after another, but instead manifest various artistic methodologies, all happening simultaneously after World War II. Consequently, the structure lets Knopf and Listengarten focus on six performative paradigms: “Language and Silence,” “The Ritualistic,” “Disruption,” “Camp,” “Landscape,” and “Terror.” This structure gives the editors expanded room to comment and contextualize—to enliven the unexpected—while simultaneously avoiding the fettering bulk that characterizes many Norton Anthology-like doorstops.

“Language and Silence” explores one of the most arresting and poetic facets of the avant-garde: These plays don’t sound like what we expect. Often, they don’t sound like something we can even understand. The impossibility of non-narrative comprehension is, of course, a falsehood generated by the dominant representational paradigm; after all, our language represents ourselves, and we are acculturated to see ourselves in the representational. This anthology is one path away from that limiting perspective. “Language and Silence” provides three of the most innovative language-users in Western theatre: Beckett’s silent “Act Without Words I,” Richard Foreman’s free-association Rhoda in Potatoland: (Her Fall-Starts), and Mac Wellman’s found-text amalgamation Terminal Hip. Like all the plays in the anthology, these are presented organically within a context that enriches the unexpected. Here, a mainstay interview with Wellman supports the plays with his excellent observation that “most bad language describes a spiritual condition which is not grammatical, but it is real.”

Wellman’s linguistic position that performance is spiritually charged inspires the second section, “The Ritualistic.” The use and role of ritual in modern society manifests in Kenneth H. Brown’sThe Brig, Naomi Iizuka’s Body Beautiful, and Suzan-Lori Parks’s The Death of The Last Black Man in the Whole Entire World. Each of these plays takes repetition and the physicality of the stage in powerful, divergent directions. When the plays are contextualized with an excerpt from Sartre’s Saint Genet and an interview with Jerzy Grotowski, then their layers of ritual are illuminated anew, both directly and vicariously.

The unity created by ritualized activity stands in important contrast to the third section, “Disruption.” Here, we get some of the most unsettling (and evocative) manifestations of post-war performance. These are not works designed to disrupt a comfortable convention or idealized abstraction, but to leave an audience member physically shaken. Most notable here is an excerpt from Karen Finley’s We Keep Our Victims Ready, whose work was at the core of the NEA controversy in 1990. Finley uses “the ‘art of offending’ to question sexual politics and disrupt norms of gender subjugation,” and her work is some of the most visceral and powerful in the collection. Given that avant-garde work—on the page at least—can be a cerebral or emotionally cool experience, this section reminds us that on the stage these plays roil with passion.

The fourth section, “Camp,” offers a completely different take on passion and ideology. While the editors acknowledge that “camp has always been on the margins of the avant-garde,” the section is an unexpected and valuable addition to the anthology. The editors summarize their position with the artist Cleto, who defines camp as a “‘crisis of identity, of depth, and of gravity. Not a stable code, but rather a discourse produced by the friction with and among other discourses.’” Such contrarian discourse is at the heart of the avant-garde. In Charles Ludlam and Bill Vehr’s Turds in Hell, the instability of code is juggled like a mad circus performer: scary, awful, and amazing. Furthermore, Susan Sontag’s classic essay “Notes on ‘Camp’” is juxtaposed with Charles Ludlam’s essay “Camp,” which directly argues against her. In their disagreement, the position of Cleto (and the editors by default) is reaffirmed.

The most visual facet of avant-garde performance appears in “Landscape,” the fifth section. Drawing the term “landscape” from one of Gertrude Stein’s lectures, the editors are able to illustrate the plasticity of space, for both the physical and psycho-emotional performance arenas: “allowing audience members to experience the totality of the theatrical event, rather than to follow a plot through time.” Such a broad categorization is, handily, the largest section of the anthology, incorporating long works including Hélène Cixous’s Portrait of Dora, Tadeusz Kantor’s The Dead Class, and Charles L. Mee’s Vienna: Lusthaus. Of the multiple prose documents to re-inform and contextualize these plays, Heiner Müller’s essay “Dove and Samurai” best articulates the poetic heart of the section. Müller says that “Robert Wilson comes from the space Ambrose Bierce disappeared into after he had seen the horrors of civil war.” Suddenly Robert Wilson, the most sculptural of 20th-century theater artists, rises like an obelisk and defines this artistic landscape by standing ninety degrees against it.

The anthology culminates in “Terror,” which showcases innovative artists who understand the darkest facets of Western society and unknowingly presage the cultural fallout of 9/11. Caryl Churchill’s Far Away offers the unexpected experience of encountering individuals in the process of being removed from society, while Griselda Gambaro’s Stripped has an Argentinian sense of disappearance that “emphasizes the conspicuous presence of political and social content in her plays, setting them apart from the works of Eugène Ionesco and Samuel Beckett and bringing them closer to the political theater of Brecht.” Such dark waters get contextualized by Charles Marowitz’s essay “Notes on the Theatre of Cruelty” and Anne Boggart’s “Terror, Disorientation, and Difficulty.” Boggart sums up the experience for potential fans of the anthology: “Most of the truly remarkable experiences I’ve had in the theatre have filled me with uncertainty and disorientation.”