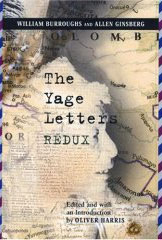 After three years of self-imposed exile in Mexico City, culminating in the accidental shooting of his wife in the notorious “William Tell” incident, William Burroughs—strung out on junk and at the end of a long streak of bad luck—skipped bail and left the country. With brief stopovers in Palm Beach, Florida, and Panama City, Burroughs arrived in Bogotá, Colombia, in January of 1953, ostensibly in search of yagé, a strong hallucinatory drug used by the Indians. During the course of the next seven months, Burroughs documented his quest for “the final fix” in a series of letters to Allen Ginsberg, as well as journal entries and photographs. From this material Burroughs eventually began to put together a longer narrative of his adventures, in the form of letters, articles, “routines,” and cut-ups, which first appeared piecemeal in various literary magazines. Ten years later, after extensive reworking and editing along with Ginsberg, The Yage Letters was published by City Lights Books. In addition to narrating Burroughs' adventures, the book also contained letters by Ginsberg and other additional texts. Two revised editions were published in 1975 and 1988, and now, in conjunction with the 50th anniversary of City Lights, we have The Yage Letters Redux, expanded with much previously unpublished material and with an in-depth introduction by Oliver Harris.

Despite Burroughs’s “qualifications” (graduate studies in anthropology at Harvard in 1938, and, later, at Columbia and Mexico City College), he was in no way prepared for a true scientific or botanical expedition when he arrived in South America. His quest was more of a romantic one in nature, a search for a kind of visionary grail, the “derangement of the senses” referred to by Rimbaud, which might enable Burroughs to transcend to new levels of perception and creativity, or, as he said in a letter to Ginsberg, to “change fact.” Junky, his only published book at that point, ended with its hero setting off for Colombia in search of yagé: “Maybe I will find in yage what I was looking for in junk and weed and coke. Yage may be the final fix.”

An occurrence of typical Burroughsian synchronicity resulted in a chance meeting in Bogotá with Richard Evans Schultes, a fellow Harvard graduate and a world authority on hallucinogenic plants. Schultes gave Burroughs much of the background information he needed concerning yagé and directed him south to the Putumayo River, where allegedly the medicine men were still actively using yagé. For the next seven months Burroughs followed a peripatetic itinerary through the remote villages and jungles of Colombia, Ecuador, and Peru, meeting various shamen and medicine men, some more legitimate than others, and ingested a diverse variety of concoctions and infusions of yagé combined with other hallucinogenic plants, commonly referred to as ayahuasca. The identification of Palicourea Sp. Rubiaceae as one of the key ingredients of ayahuasca, “essential for full hallucinating effect,” would have been Burroughs’s one claim to botanical fame, had this fact not been subsequently omitted from the original “Yage” manuscript. As it was, Burroughs returned to New York City in August of 1953 with little more than his dwindling funds, battered health, and jumbled notes, correspondence, and photos.

Together with Ginsberg, Burroughs began putting the material into shape, and by the time he left for Tangier in December, the manuscript had taken on its epistolary form. During the next ten years, sections of the work appeared in literary magazines such as Big Table, Kulchur, Black Mountain Review, Floating Bear, and City Lights Journal, and gradually more material was added to the manuscript. Meanwhile Ginsberg acted as an agent on behalf of Burroughs in an attempt to get the book published as a whole, applying what he referred to as “golden pressure” on Lawrence Ferlinghetti in particular. The original manuscript was lost in 1956, eventually pieced together again, and finally, in 1963, four years after the appearance of Naked Lunch, the time seemed right for publication. City Lights had just published Miserable Miracle, the translation of Henri Michaux’s mescaline experiences; Timothy Leary and Richard Alpert had been booted from Harvard for their LSD experiments; Aldous Huxley had just died. Six months later Ken Kesey and his Merry Pranksters would set off across America, opening up the way for all things psychedelic and consciousness-expanding.

The impact of The Yage Letters was minor at best, receiving little critical attention and gradually becoming cloaked in a sort of minor cult status, doomed to languish on the shelves among other obscure literary psychedelia of the early '60s. So why the need for an expanded Redux edition some 43 years later? While not contributing significantly to the greater canon of scientific or botanical knowledge, The Yage Letters documents important stations of development in the careers of both Burroughs and Ginsberg. Preceding Hunter S. Thompson’s “Gonzo Journalism” as well as Terry Southern’s earlier “Subjective Journalism,” The Yage Letters is a unique hybrid of the comic picaresque tradition, travel writing, the ethnobotanical field report, political satire, psychedelic literature, and epistolary narrative. Burroughs was obviously deeply affected by his yagé experiences, which profoundly affected his thinking:

I must give up the attempt to explain, to seek any answer in terms of cause and effect and prediction, leave behind the entire structure of pragmatic, result seeking, use seeking, question asking Western thought. I must change my whole method of conceiving fact.

The third edition of The Yage Letters added “Roosevelt after Inauguration,” which is allegedly the first of Burroughs’s “routines,” a form he went on to develop which eventually became the basis of Naked Lunch. Also included is one of Burroughs’s first cut-up texts “I am Dying, Meester?” which carries over Rimbaud’s “derangement of the senses” from the visionary to the literary. Both of these forms became the sort of “space-time travel writing” out of which Burroughs developed the mainstay of his unique oeuvre.

Ginsberg’s letters, though notably fewer, are of equal importance, vividly portraying how deeply affected he was by his subsequent trip to South America and experiences with yagé some seven years later. Ginsberg’s understanding of the far-reaching implications of the psychedelic experience are both astute and poetic:

I am only a busybody meddling in human affairs vainly trying to assert the Supremacy of the Soul—which can take care of itself without me & my egoistic assumption of the Divine, my presumptions that the Eternal needs my assistance to exist & preserve itself in the world. All my worry’s as much of a Joke as the equal worry of the police. We are all trapped in the Divine Honey, like flies, struggling in different ways to accommodate ourselves.

The Yage Letters shows Burroughs and Ginsberg at critical junctures in their lives, making clear their determination and the degree of their commitment to breaching the confining norms of Western thought and culture. Traveling in post-colonial, mid-’50s South America was fraught with political overtones as well, as Che Guevara noted in his Motorcycle Diaries just one year earlier; the Cold War and the geopolitical scramble for dominance, the U.S. Point Four aid program, the search for new rubber and oil resources, and potential revolutions in the making provided a volatile and shifting exterior for what was essentially a journey to the interior. Simultaneously the CIA had recently begun their notorious drug research program in America, MKUltra, in a desperate bid to monopolize mind-control drugs. As such, The Yage Letters is a complex text intertwining several different levels of anthropology, ethnology, biochemistry, history, politics, and “shamanic alchemy.”

Extensive appendices and notes further map out the long and complex genesis of The Yage Letters, and the wide-ranging introduction by Oliver Harris does well to place this seminal, genre-bending text in the larger context of its historical and cultural significance. A timely and fitting literary event to mark the 50th anniversary of City Lights, longtime independent publisher of the unorthodox and the alternative.