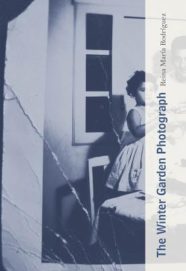 In the title poem of this intriguing book, Cuban poet Reina María Rodríguez writes, “that’s where I’d like to live . . . / in the inexact place of a missing photo / missing so it can’t replace or essay the person that I am.” Rodríguez goes on to call this place she wishes to inhabit “the landscape of desire” Though this poem comes late in the book (the third poem from the end), it confirms the dynamic that plays throughout—the author uses photographs from the UNESCO magazine Courier to spark a meditation on desire.

The importance of photography can be found in the very title of this book, a phrase used by Roland Barthes in his Camera Lucida: Reflections on Photography. In that landmark book, Barthes, after concluding that photography fails to convey truths about the world around him, encounters a picture of his mother as a girl in a winter garden. He suddenly sees the evocative power of a photograph. Like Barthes, Rodríguez also finds photos as spaces laden with desire.

In the forty-four poems (five of them prose poems) that make up this bilingual (Spanish and English) book, desire emerges as a constant theme. In “a Thracian rider,” for example, Rodríguez writes:

and the bronzed and leaden smile
leaves an ochre taste on my lips. I kissed you
on your modern photo paper
and we blurred in that instant
where I remain in you . . .

The reader witnesses not only an intimacy with the Thracian rider, but with the “modern photo paper” as well. In another poem, titled “what confusion,” the author tells a mysterious “you” that “I can’t hold you tightly enough / to merge, sweaty, into the chaos of all things”—and yet that’s what Rodriquez is able to do, over and over, in these photo-induced poems: to “merge” with the images as if stepping into them.

As well, Rodríguez’s poems show her readers that “photography / has something to do with resurrection”—at least of memory and imagination. Her poem “sinking,” for example, appears to be focused on a photo of “a small Roman boat / in the Lazaretto cove.” Soon, however, the poem resurrects the memory of another time and place:

Her use of pronouns, “he” apparently transforming into “you,” adds to the intensity and mystery of this poem. Note also that we have an unidentified photo in a poem about a photo!

The translations by Kristin Dykstra and Nancy Gates Madsen deserve credit for maintaining the complexity of Rodriquez’s work, with its shifting pronouns and long, winding lines. Their expertise can also be seen in the title of the book—rather than giving us a literal translation, “The Photograph of the Greenhouse,” they noted the author’s allusion to Barthes, and instead offer The Winter Garden Photograph.

Given the importance of photographs to this book, it’s too bad that Rodríguez, as well as the translators, didn’t provide a list of those UNESCO Courier pictures that helped inspire these poems. Such a list, enabling the interested reader to track the photos down online, would enhance the reading of these meditative poems and illustrate how the author transformed the original prompt.

Also, given the importance of photography in this book, it’s disappointing that there’s no mention of this topic in “Intense Circularities,” an interview with the author by Rosa Alcalá contained in the book; in over thirteen pages of an otherwise engaging conversation, photography never surfaces. This comment on landscape by Rodríguez might be related: “I convert all landscapes into text . . . . It is not a contemplative life, it is simply a life to steal from one place and take to another.” Perhaps Rodríguez feels she likewise “steals” from the images in the UNESCO publication for her poems?

These are minor problems, however, in a rich and complex book that shows how one art form (in this case poetry) can provide entry into another (photography). These closing lines from “the chose one,” a poem based on a photo of the Taj Mahal, sums up the way Rodríguez subsumes the light-and-shadow world of the photograph with her poetic gaze: “there’s a shadow, a falsification, / that looks like the truth.”