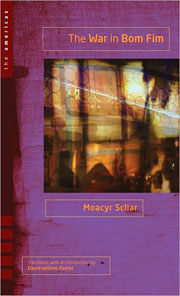 Often described as the major Jewish author of Brazil, Moacyr Scliar, who grew up in the south of the country in Porto Alegre, died this year on February 27, soon after this translation of his earliest fiction, The War in Bom Fim, appeared in English.

Originally published in 1972, the work seems, at first, to be a magical realist tale of the mostly Jewish immigrant community of Bom Fim during World War II in the 1940s. In that context, it at times resembles a mix between Sholom Aleichem and Neil Simon, as the story weaves in and out of descriptions of the poor Jewish citizens and their lives, involving two young boys, their father Samuel, his loveable and somewhat resistant mare Malke Tube, their fearless mother Shendl, and magical events that define this Yiddish-speaking society, including the omnipresence of Chagall and his “floating violinists,” whom the narrator transports to the streets of Porto Alegre along with the possibility of Kafka living nearby. On the other side of this somewhat nostalgic vision exists the games of the young brothers, Joel and Nathan, as they and their neighborhood friends imaginatively fight a war against the Nazis, who have invaded a nearby beach. With Joel as their leader, Nathan as a flying savior, and every child and beast at their side, the city of Porto Alegre is amazingly saved again and again, even when, at the end of the war, Hitler attempts to hide out in a nearby mansion.

This part of the story, which takes up a larger portion of the book, presents a wonderfully and innocently benign picture of the dying Jewish community. Unfortunately, as the boys grow up and the older parents begin to leave the neighborhood, things gradually turn grimmer, finally collapsing into a series of absolute horrors that demonstrate that despite their symbolic battles with hatred, this community is affected as well by anti-Semitism and the abandonment of social and religious values.

From the earliest pages of the book, moreover, there are clues that not everything in Bom Fim is right. The local dog, Melâmpio, hates Jews, and barks on winter nights to point the way to their house for Stukas and Messerschmitts. The author’s insistence of mentioning—every time he describes the large tree-lined Redenção Park in the middle of town—the benches of waiting pederasts seems almost homophobic; ultimately, one of the children, Alberto, is described as letting "himself be buggered." Rosa, a young girl, is raped in the park and leaves home. With the end of the war, new shops and high-rise apartments come to Bom Fim, making it more and more difficult for Samuel to sell his meager wares from his cart.

But these are only the rumblings of far more terrifying events that bring down the curtain on Scliar’s seemingly rhapsodic recollections. The younger, frailer brother, Nathan, suddenly dies. Joel’s mother goes insane and is locked away in an institution. His father, Samuel, is grotesquely trapped under his beloved mare, and must disembowel the beast to escape. Joel himself leaves Bom Fim as he becomes increasingly assimilated into a non-Jewish world, and ends up selling jewelry. One by one the poor homes of Bom Fim are torn down and replaced by newer and larger structures.

Near to where old Samuel now lives is a German bartender, who, trying to keep a low profile, endures the occasional tirades of Samuel and other Jewish customers. For his birthday, however, his two reprehensible sons capture Samuel, hoping to show him off to their father, and threatening to burn him as in the Nazi death camps. The terrified old man attempts to run off, but falls, hitting his head, and dies. To hide the crime, the sons cut up the body into pieces at the very moment that their mulatto mother returns home from a night of sexual pleasures, and, witnessing the pieces of meat before them, is insistent that they continue with what she perceives to be a barbecue. Inviting several other friends, she, her friends, and the speechless, now sickened brothers, sit down to a cannibal feast.

In another part of the city, Joel attempts to entice a wealthy young girl to have sex. Ultimately, realizing that any relationship with her will be impossible, he steals a car and, with a strong sense of nostalgia and self-pity, determines to visit his father to talk in Yiddish with him about the old times. So ends Scliar’s memorial to his Jewish past, none of which now appears to be salvageable or to represent any possible salvation. Joel’s realization that “the war is over” may also signify his inability to perceive that another war—a war to win back his heritage and meaning—has just begun.