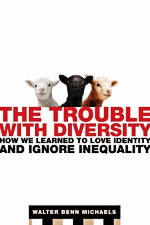 On the television “reality” series Survivor, a group of people is dropped into a tropical wilderness and left to fend for itself with minimal supplies. The contestants are sorted into tribes, sometimes randomly, sometimes by age or gender. The tribes compete against each other for rewards. Within each group, therefore, people have to cooperate while at the same time manipulating and lying to each other because only one person can become the million dollar survivor.

This season the tribes were chosen by race, or as we now say, ethnic and cultural diversity. The four tribes are white, African-American, Asian and Latino. It makes me a little queasy to watch the groups adopting, albeit ambivalently, certain stereotypes about themselves. The Asians joke uneasily about how their physical prowess, as “little people” is under-estimated by the other groups. The black guys call the women “sisters” and talk about needing to prove they can swim and handle a boat as well as they play basketball and run track. Every tribe has a vague notion of “representing our people.” They invoke “blood and heritage.”

But what do they mean? In, for example, the artificially created African-American community, what does a nursing student have in common with a jazz musician, a make-up artist, a salesman and an actress? The situation is even odder in the Asian and Latino tribes where people of Korean descent are lumped with a Vietnamese immigrant and the descendants of Filipinos, while contestants descended from Mexicans are supposed to have something essential in common with Dominicans and South Americans.

It is fascinating to watch every one of these very disparate people willing to subscribe to identity politics, in which, no matter what your background, religion, language, core beliefs, education, job or income, you consider yourself, first and foremost, a member of an ethnic community.

It is a strange period in our country’s history, as Walter Benn Michaels points out. Biologists have shown there is no such category as race, and yet we go on behaving as if it exists. The one- drop rule, once used to justify Jim Crow laws, now serves as a badge of pride. You can be “black” even if you look “white,” prefer classical music to rap, don’t know ghetto slang and live in the suburbs. There is no physical basis to racial identification, but there isn’t a cultural one either.

So what’s going on? Why, Michaels asks, do we love to talk about race, a.k.a. cultural diversity?

Americans, guilty about racial prejudice, now bend over backwards to appreciate and celebrate other “cultures.” It has reached the (to me) absurd point that deaf people, or sufferers from other physical impairments, are also now considered to have a distinct and valid “culture,” as though it were more important to respect their disabilities than try to repair them.

The elephant in the room, Michaels argues with wit and style in this vigorous polemic, isn’t race, whether the bad kind, racism, or the good kind, diversity; it’s class. Neither Republicans nor Democrats want to recognize that we have rich people and poor people and that they are growing farther apart.

The trouble with diversity, then, is not just that it won’t solve the problem of economic inequality; it’s that it makes it hard for us even to see the problem. If we’re on the right, of course, it’s not clear that there is a problem. The right tends to regard economic inequality less as a political issue than as something like a fact of nature—maybe temporary (when free markets triumph, it will go away), maybe permanent (if people make the wrong choices, they have to pay for them), and, either way, not that big a deal (today even poor people have TVs; no one had TVs a hundred years ago.) The left [Michaels calls this group “neoliberals”] insists on giving poor people identities; it turns them into black people or Latinos or women and treats them as victims of discrimination, as if in a world without discrimination, inequality would disappear . . . And when people do want . . . to talk about inequality instead of identity, they are criticized by the right as too ideological [class warfare!] and by the left as insufficiently sensitive to the importance of race, sex, gender, et cetera—that is, as too ideological.

The income gap is growing, as is our national delusion that we are a class-less society. More people, mistakenly, identify themselves as middle class than actually qualify, as if belonging were a marker of status rather than income. In fact, the middle class is shrinking. Another delusion we have is the idea that there is equal opportunity—that everyone, by dint of hard work, can move up in class. Anyone, even a female, can grow up to be president! Michaels, relying on government statistics and a host of academic studies, demonstrates the falsity of American dreaming.

The surest way out of poverty is a good education that leads to decent jobs, but the diversity that every college in the nation embraces does not include the poor; they’re handicapped at the start of the climb. Segregated into poor neighborhoods with poor schools, they are the least likely of “communities” to qualify for diversity-based scholarships. The poor—black, white and every other “minority”—cannot compete. “There are very few poor people at Harvard, or… at any of the 146 colleges that count as “selective”: 3 percent of the students . . . come from the lowest socioeconomic quarter of American society; 74 percent come from the highest.”

The new historians of the working class seem to be turning it into just another separate-but- equal culture. They study its racial, sexual, cultural identifications, its taste in food and entertainment, its belief systems—everything except its work. “Where you used to just distract yourself from economic difference by focusing on cultural difference, now you can celebrate economic difference by pretending it is cultural difference.”[201] Labor Day celebrates the art of the barbecue.

Michaels is short on solutions, except for some vague gestures in the direction of socialism. At least he is not alone in his critique. There are signs that other people, from journalists to politicians, are beginning to worry about income inequality. The New York Times Magazine has published stories about the working poor and their lack of bootstraps. Barbara Ehrenreich wrote Nickeled and Dimed, Thomas Frank wondered What’s the Matter with Kansas? The “Wal-Mart movement” decries the company’s wage and benefits structure. There’s even a new moderate evangelical group, Sojourners/Call for Renewal, lead by Jim Wallis, that—having apparently re-read the New Testament—wants to move away from “moral” issues to questions of social justice.

I agree with most of Michaels’ points. His insistence that we take off our multi-colored glasses and face the black-and-white issue of opportunity vis-a-vis wealth and poverty is powerful and rational. Perhaps even too rational. Humans are tribal in the worst and best ways: us against them, yes, but also, we want to belong to a kind of family that takes pride in us.

In his zeal to focus our attention on the growing problem of a class hierarchy, Michaels minimizes the continuing problem of racism. We’re not all respecting and admiring each other’s “culture.” Immigration “reform” and border patrols are in large part coded ways of saying we’re afraid of being engulfed by Them, with their foreign language, their foreign religion, their dark complexions. African-Americans can drink from any public water fountain they want, but they face continuing forms of unequal treatment, from banks to mortgage lenders to real estate agents to landlords to cab drivers. And whether they want to or not, they are always on notice to “represent” their race/culture; whether walking down a sidewalk or moving into a white neighborhood, they face the (usually) unspoken demand to prove themselves as upright and deserving citizens.

Currently Bill Cosby is raising money for a slavery museum, on the model of the Holocaust Museum. It’s about time, but for whites, it’s a cheap way to pay for an ugly past. As Walter Benn Michaels himself points out, also comparing the descendants of slaves to Holocaust survivors and their children, what they deserve—no, require—is justice in the form of financial reparations. That won’t resolve the larger and more intractable problem of the widening fissure between the rich and the poor, but it’s a start, a public dime well spent.