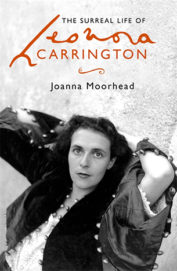 What would you do if you found out that a member of your family was one of the most famous expatriate artists in Mexico? If you are Joanna Moorhead, you hop on a plane across the ocean to meet your long-lost cousin, Leonora Carrington-and in the process, write her biography and curate some exhibitions back home.

Carrington lived through a century of the best and worst that the world had to offer, and from the perspective of many roles and nations-from a debutante in England to an artist in France to a refugee briefly in Spain, finally ending up as an artist in the U.S. and Mexico. She lived through several wars, an earthquake, and great social change, including feminism which affected her and her legacy. Her first lover, Max Ernst, was detained in France for being German. She suffered and recovered from a nervous breakdown. She participated in Surrealism, both in Europe and in Mexico. She counted some of the greatest artists and writers of the 20th century among her lovers and friends. One thing remained consistent: Carrington was an artist and writer throughout her whole life. Through all of this, Moorhead not only makes chronological sense of Carrington's life, but she also manages to weave personal and artistic details into the story.

Carrington's relationship with Max Ernst is possibly the most poignant and heartbreaking in this biography. She was not Ernst's first wife nor would she be his last; she was, however, one of the great loves of his life. If she was his "muse," he, in turn, being so much older than Leonora, served the very important function of helping her escape her parents and their expectations of her, getting her out of her house and away from her family, to whom she would never permanently return. She was already interested in painting when she met Ernst, and was in the process of developing her own unique style, one that would be deeply influenced by her involvement with Ernst and the Surrealists.

Through a series of wartime and family intrigues, that Moorhead describes as worthy of the movie Casablanca, Carrington ended up going to France and then to Spain after Ernst's arrest and her own nervous breakdown. She then prepared to travel to America. As she waited in Barcelona to get word on her travel, she encountered Ernst, who had been released from jail and had returned to their home only to find that she had sold it, having no word about Ernst or his whereabouts. She traveled to America with Ernst, who had become involved with Peggy Guggenheim. They spent time together in New York, but when Guggenheim and Ernst traveled to California, Carrington left New York for Mexico with the man who agreed to get her out of Spain in the first place, Renato Leduc, Carrington's "romantic" second husband, a diplomat who had fought in the Mexican Civil War with Pancho Villa. Shortly after they moved to Mexico, the couple went their separate ways.

In her description of Carrington's short story, "The Bird Superior," Moorhead offers this interpretation of her relationship to Ernst and the way that it ended: "In a spiritual sense, the story suggests, Leonora and Max will be united forever. What they have given one another, what they have done for one another, is woven into the very fabric of their beings. . . . But their moment in time is over. The dancing, coupling horses have separated."

In Mexico, Carrington made some of the great friendships of her lifetime. While she met and occasionally kept company with Diego Rivera and Frida Kahlo, they travelled in largely separate circles than she did. However, it was with Hungarian artist Kati Horna and Remedios Varo of Spain, fellow ex-pats from Europe, with whom Carrington would maintain lifelong relationships. In 2010, there was an exhibition of all three women in England, organized with help from Moorhead, entitled Surreal Friends.

Also in Mexico, Carrington met her third and final husband, Imre Emerico Weisz Schwartz, known as Chiki, a Hungarian-born photographer who worked closely with Robert Capa. She and Chiki had two sons, Gabriel and Pablo, who were the real loves of Carrington's life. She once said "I paint . . . with the baby in one hand, and the paintbrush in the other." She had many affairs-including one with author Octavio Paz, with whom she collaborated on a play-but remained married to Chiki until his death in 2007, "a blow probably greater than Leonora had anticipated." She lived apart from Chiki during long stretches of their marriage, including during the 1980s, when she lived in Oak Park, a suburb of Chicago. She had told a friend of hers that "she did not miss Chiki and was not planning to return to Mexico." However, by 1985, she did return to Mexico in large part because Chiki's health was deteriorating. Like many men in her life, she loved Chiki, but did not always feel a need to have him around.

There was a great stir recently when feminist art historian Whitney Chadwick claimed that Leonora was not a Surrealist. In contrast, throughout this book, Moorhead never hesitates to call her cousin a Surrealist. The well-known Chicago Surrealist Penelope Rosemount has an interview with Carrington in the book Surrealist Subversions. Removing women from the movements with which they were affiliated, whether one is trying to "liberate" them or obliterate them, has exactly the same effect: It makes women in those movements seem even more peripheral and more invisible than ever. And yet, there was an exchange between Carrington and Moorhead about The Manifestos of Surrealism, by Andre Breton, about which Carrington later sent a note back to Moorhead (written backwards, so that it had to be read in a mirror, a practice that was apparently common with her): "I never read the Surrealist manifesto."

Carrington sought to distance herself from the idea that she was "muse" to male Surrealist artists and writers; she was an artist in her own right and wanted to be recognized as such. In describing the painting "The Inn of the Dark Horse," Moorhead states that "this is not the painting of a muse, and nor is it the work of a handmaiden. This is the work of a rebel . . . who hints there are more rebellions in store." That her work was Surrealist never is in question, except in Chadwick's mind. In fact, after meeting her cousin, Moorhead wrote that "seven decades on, [Leonora was] still producing art and still championing Surrealism."

Moorhead does mention Chadwick a few times in the book, but only in passing. The only critic mentioned by name, Chadwick is a kind of representative for all feminist art critics, with whom Leonora would not have had much patience nor interest. Not that Carrington was not feminist. Moorhead talks about her wrestling with questions about women's place in society and in art, and she clearly championed women artists, even taking part in Peggy Guggenheim's Thirty Women exhibit in 1942. Moreover, Moorhead cites an interview between Carrington and Chadwick in which Chadwick talks about how difficult it must be "when art historians came along to critique her work," to which the artist replied "it's not hard, because I ignore what they are saying."

In fact, her refusal to explain her paintings gave Carrington the reputation of being an iconoclast. There is a very charming YouTube video, released by the Tate Modern in conjunction with a solo exhibit of Carrington's works curated by Moorhead, in which the two sit together in Carrington's kitchen; the artist vigorously objects to academics who try to assign interpretations to the work, which she insists must be engaged with on a visual and artistic level, not at the level of academic discourse.

Another reason for Carrington's reputation as an iconoclast-and which may also, Moorhead says, explain her relative obscurity outside of Mexico-was that she seemed always to thwart moments of potential success and fame. "As usual," explains Moorhead, "Leonora managed through [the] years to sabotage the possibility of becoming more widely known." Moorhead tells the story of a "glitzy lunch in . . . Mexico City" that she and Carrington were set to attend; "All the big names in the arts scene would be there." But Carrington was not interested in hobnobbing nor in fame or celebrity, and had a hard time believing that she even had admirers of her work. She must have realized that she did, because Moorhead also talks about all the visitors who tried to see her and who she turned away.

One of the things that makes this book charming, as well as essential, is the relationship between Moorhead and Carrington; because of that relationship, Carrington no doubt opened up to Moorhead much more than she would have, or did, to any other biographer. These are the kinds of connections you look for in a biography-the sense that you are getting to know the artist intimately, that you are being let into the artist's secret life. While at times this is a very straightforward telling, there are also little asides and insights that no one but a family member could have uncovered. In the end, Carrington's "only stipulation," as Moorhead writes, "was that no book should be published until after her death." In a world obsessed with celebrity, this seems an odd request for an artist; contrast that with Salvador Dali, for example, a Surrealist painter who was nothing if not self-promoting.

Another delightful detail is that most of the chapters are named after paintings or stories by Carrington, which Moorhead weaves into the biography, showing how the works reflect the things going on in Leonora's life. The problem with artist biographies, of course, is the expense of reproducing color plates; one is frequently left with descriptions of paintings without the actual visual in front of you. Fortunately, there are several stunning paintings in this book, including the back cover and several insets, but there are always those you wish you could see. As Carrington insisted, it is not enough to explain the painting, you have to experience it. Moorhead does a better job when it comes to the stories, explaining the plot and significance, but that too, is not a substitute for reading the actual text. Thankfully, with the recent release of The Complete Stories of Leonora Carrington (Dorothy) and the memoir Down Below (NYRB), her prose is available so that everyone can experience it as well.

And while it is Carrington's biography through and through, it is also the story of Joanna and Leonora, and it begins and ends with them, meeting and saying goodbye, in life and in death. The final chapter, "Kron Flower," describes their final meeting and Moorhead learning of Carrington's death in May, 2011. In the epilogue, she reflects on knowing the artist and visiting her grave sometime later, since she had not gone to Mexico for the funeral. One has to wonder the reason for that, because Moorhead, like her cousin, doesn't explain herself in this moment. Iconoclasm seems to run in the family.